At least eight policemen killed after assailants in UP state open fire on a police team sent to arrest a murder suspect. 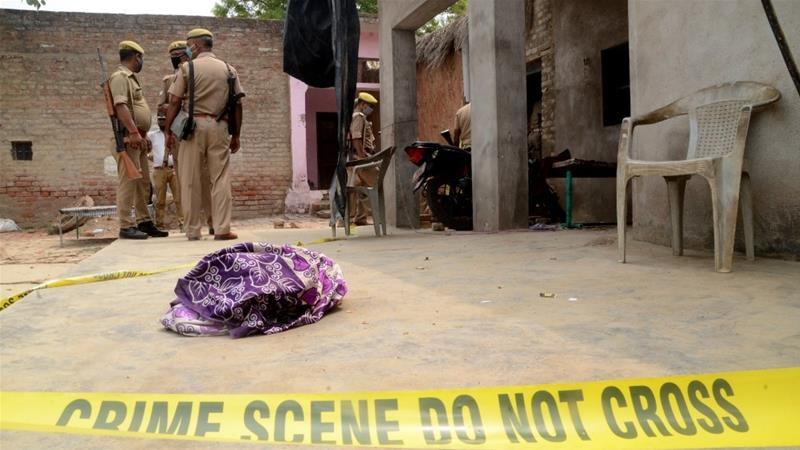 At least eight policemen were killed in the northern Indian state of Uttar Pradesh after a group of assailants opened fire as the officers were trying to arrest a murder suspect.

The ambush took place in Bikaru village, near the city of Kanpur, about 80km (50 miles) southwest of the state capital Lucknow.

Awanish Awasthi, an Uttar Pradesh state government spokesman, said on Friday a group of criminals blocked a road with excavators and fired on the police officers from rooftops as they approached the village to arrest criminal suspect, Vikas Dubey.

Dubey has a long criminal history, including the alleged murder of a politician and state minister in 2001, and was wanted in connection with at least 50 other criminal cases.

Five officers were injured and the gang fled before police reinforcements could reach the area, Awasthi said, adding that the suspect “had the support of the entire village as there was firing from several rooftops”.

Prashant Kumar, another senior policeman, said the attackers – thought to number seven or eight – appeared to have been armed with semiautomatic weapons.

“It was a planned attack,” Kumar told reporters.

According to the indianexpress.com, two members of the gang later died in a hospital after a gun battle broke out between the assailants and an additional police team which had rushed to the spot to provide support.

A major operation was under way on Friday to track down the attackers.

Uttar Pradesh, with a population of 230 million, is one of the most impoverished states in India. It is considered to be one of the most lawless states with a high incidence of armed robberies, kidnappings for ransom and crimes against women, according to the National Crime Record Bureau.

Hong Kong protesters to take their democracy message to US Consulate