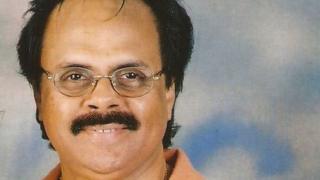 Indian actor and screenwriter Mohan Rangachari has died at the age of 67 in the southern state of Tamil Nadu after suffering a heart attack.

He rose to fame in southern India, where he was hailed as a “legend” for his comedic writing and acting.

Mr Rangachari was best-known for his glib one-liners and worked with some of the biggest names in Tamil cinema.

An engineering graduate, he has written more than 30 plays and 100 short stories over the last four decades.

Tributes from fans and film stars started pouring in on social media after news of his death.

On Twitter, #CrazyMohan started trending high – a reference to his first play, Crazy Thieves in Palavakkam, which was released in 1976.

It was an instant success and even earned him a new name – Crazy Mohan.

RIP #CrazyMohan
The master of one-liners, wordplay, puns and PJs.
In other words, the King of Twitter even before Twitter was invented.

#CrazyMohan you made a whole generation laugh, insider's know how much your writing was appreciated, adopted and still continues as a template in some shows across India. An actor, playwright, theatre legend. pic.twitter.com/6gMDvuT7ZE

#CrazyMohan sir is no more. What a sad day for cinema, theatre, laughter and life. There will never be another like him. Prayers for his soul.Deepest condolences to the family. He was a huge part of our collective #Tamil consciousness and our ability to make or laugh at a joke.??

You were a part of growing up for an entire generation and you made millions laugh and think too. A part of so many of us bid goodbye today. Legend. Rest in Peace Sir. Om Shanti. #CrazyMohan

Dejected to hear of the passing of #CrazyMohan, eminent Tamil humourist, satirist & playwright. He inspired my humour alongside English writers such as P.G. Wodehouse and G.B. Shaw. His side-splitting dialogues for several Tamil movies will keep generations in good spirits. RIP

“The mechanical engineer from a conservative middle class family took to theatre and many of his hits that followed led with the ‘Crazy’ title,” she added.

In 1979, Mr Rangachari started his own production company with his brother, which they called Crazy Creations. They produced more than 30 plays and staged thousands of shows in India and abroad.

One of his most popular plays, Chocolate Krishna, was staged more than 500 times in three years.

“I would call writing an accident,” he told Indian news site Scroll in 2017. “Usually you lose your life in an accident, but I got my life in this accident.”