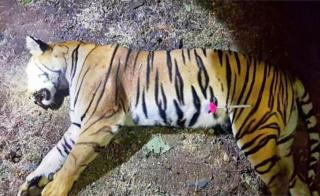 Tigers are in the news in India for all the wrong reasons.

At the weekend, a “man-eating” tigress which was said to have killed 13 people was shot dead after a near two-year hunt. Another tiger was killed by a mob after it mauled a man, who later died in hospital.

A federal minister accused the forest minister of a state ruled by her party of ordering the “ghastly murder” of the “man-eating” tigress.

Maneka Gandhi, a devoted animal activist and a member of Prime Minister Narendra Modi’s BJP-led government, said the killing of the tigress, simply known as T-1, in the forests of Maharashtra state, was “nothing but a straight case of crime”. Animal rights groups chimed in, saying T-1’s killing was all about “satisfying the hunter’s lust for blood”.

They were alluding to a private sharpshooter who was hired by the government to kill the tiger.

However, the reality on the ground is more complex.

Conservationists believe frequent conflicts between humans and tigers – both are straying into each other’s habitats – are possibly the result of the problem of plenty.

This is a major conservation success. By one estimate, between 1875 and 1925 alone, some 80,000 tigers were killed in India. Bounty and sports hunting were rampant – kings and officials killed tigers in their thousands, using guns, spears, nets, traps and poison. By the 1960s the number of tigers had dwindled precipitously.

Over the next few decades, the numbers rose as a result of a ban on hunting, government initiatives to streamline conservation, and awareness drives in villages.

A strict wildlife protection law implemented in 1972 made it virtually illegal to kill or capture wild animals even when “problem animals” were involved in severe conflict situations.

Even the conflict between free ranging tigers and local people is not new. Tigers killed nearly 800 people in 1877, for example, and more than 900 people in 1908 in British-administered provinces.

One of the reasons for more recent human-tiger conflict is that India has too many tigers and too few forests that can sustain them unless more protected reserves are added.

According to one estimate, big cats breed and live in only about 10% of India’s total potential tiger habitat of 300,000 sq km (115,830 sq miles). Animal density in many of these forest areas is high, and surplus tigers sometimes venture outside for food. Poachers have gained from the conflict by killing tigers and bribing villagers to set up traps.

Conservationists say conflict with humans is largely restricted to the edges of protected areas, forests and plantations. People living here are sometimes killed or mauled. Many such incidents have happened, they say, when mobs have surrounded tigers who have entered villages to take away livestock.

“Very rarely tigers may maul or kill humans they unexpectedly encounter, and the tiger may sometimes eat a part of the cadaver,” says Ullas Karanth, one of the world’s top tiger experts.

Unless India expands tiger reserves and areas protected for tigers, such conflicts will increase. Wildlife and forestry managers will find themselves coming under increasing pressure from both animal activists and affected villagers when it comes to putting down “man-eating” tigers.

And as conservationists say, in most cases, putting down a “problem” tiger is the only option left for wildlife managers. Tranquilising a big cat is not easy. Also, they say, capturing a tiger is often not an ideal solution as wild tigers do not easily adapt to life in captivity. In any case, India’s overcrowded zoos have little space for more tigers.

But what conservationists cannot figure out is why governments are hiring private hunters to take down “problem” tigers, as happened in Maharashtra over the weekend. They say India’s forest departments have nearly 90,000 workers on their rolls and should use their own trained staff for the purpose.

“Science and practical experience clearly show that we cannot care for every individual wild tiger. Animal lovers and conservationists should focus on saving the species as a whole, rather than saving every individual,” says Karanth. “Conservation interventions must, therefore, be guided by scientific evidence and social practicality, than emotion.”

For the moment, emotion seems to be winning.

Generation Grit: Hi, I'm Jed – like Jedi without the 'eye'