Living on the western coast of Java, the fisherman, Damin, was accustomed to the explosive sounds of the volcanic island, Anak Krakatau, which has erupted almost daily since June. But this time, its roar was unusually loud, he said Tuesday.

“We are used to hearing something like that but the sound was so big,” said Mr. Damin, who like many Indonesians uses one name. “It was different. It was like a bomb exploded.”

The sound turned out to be the only warning of killer waves, which scientists theorize were produced by a large landslide either above or below the sea surface. They roared ashore in the darkness, barely a half-hour later. And at more than 16 feet, the tallest was more than five times what officials initially had reported.

Indonesia, an archipelago with 127 active volcanoes and frequent earthquakes, has suffered from deadly tsunamis repeatedly over the years, including two in the past four months.

Despite scientific advances in early detection of tsunamis, the country remains especially vulnerable. And it has no way of detecting precisely the kind of tsunami that scientists suspect was generated on Saturday — from a landslide, caused by a volcanic eruption, which displaced an enormous amount of seawater that ambushed many thousands of unsuspecting Indonesians ashore.

“There was no evacuation,” Sutopo Purwo Nugroho, the spokesman for Indonesia’s disaster management agency, told reporters on Tuesday in unusually blunt terms. “The communities had no chance to evacuate.”

Mr. Sutopo also was frank about the reason.

Indonesia’s worst tsunami in modern times was the Indian Ocean tsunami of 2004, which left about 200,000 people dead or missing in northern Sumatra.

After the disaster, Indonesia took steps to prevent a recurrence, including construction of evacuation towers in Aceh, the hardest-hit province, and the establishment of a tsunami warning system. Completed in 2008, it consists of seismographic sensors, buoys, tidal gauges and GPS.

But the warning system is costly to maintain and parts of it have fallen into disrepair — including the buoys, which were designed to detect sea-level changes and transmit the information electronically to a data center that could alert local authorities to a tsunami danger. 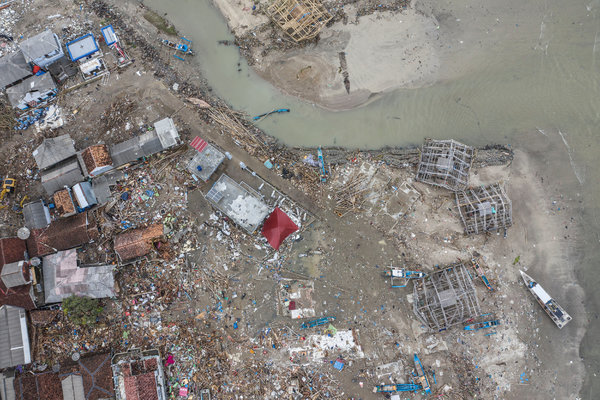 When an earthquake set off the deadly tsunami that struck the island of Sulawesi in September, killing 2,100 people, no data was received from the buoys. And warnings triggered by the system’s seismographic sensors could only be disseminated haphazardly because some cellphone transmission towers had been toppled by the quake.

Mr. Damin said he had been alert to the possibility that the eruption on Saturday meant danger for his fishing village.

He was watching the sea about a half-hour after he heard the frightening noise. That is when he saw the first wave of a tsunami approaching. He began running with his wife and mother for higher ground.

“I dragged my wife and mother,” he said. “Run fast! Go! Hurry!” he recalled shouting at them.

A second wave, much larger, caught up with them as they ran. It swept them away but they managed to reach safety.

When they returned to their home near the beach, there was nothing left.

“It wiped out my house and all the things in it,” he said.

At least 429 people died and nearly 1,500 were injured in the Sunda Strati tsunami, which struck western Java and southern Sumatra. The number of casualties was high in part because many people were at the beach enjoying a long holiday weekend.

But officials acknowledge that many lives could have been saved if the country had an adequate tsunami warning system.

Officials initially said the Sunda Strait tsunami was three feet high, an estimate they later raised to 10 feet. Mr. Sutopo said Tuesday it was even higher, reaching more than 16 feet in some areas.

One of those places was Sumur, the area that includes Mr. Damin’s fishing village of Sumber Jaya. Nearly all of the houses in the village were damaged or destroyed.

Members of the public were warned Monday to stay away from the coast of the Sunda Strait for at least two days for fear that Anak Krakatau — the Child of Krakatau — could set off another tsunami.

The volcano has emerged from the crater of Krakatau, or Krakatoa, which erupted in 1883 in one of the largest such events ever recorded.

But many residents, including Mr. Damin, returned to their homes Tuesday anyway to inspect the damage and salvage what they could.

At one point in the afternoon in Sumber Jaya, someone shouted that a big wave was coming, prompting hundreds of panicked people to run for higher ground. Among them were police officers and search-and-rescue personnel helping with the recovery.

This time, it was a false alarm.

Another resident who returned to the village, was Tati Hayati, 51, who makes a living selling gas to fishermen.

She said she tried to escape the tsunami with her children and grandchildren packed in an SUV.

The second wave of the tsunami tipped over the vehicle and rolled it nearly 100 feet, ripping off its back door, she said.

“Suddenly it was dark,” she said. “My mouth filled with sand and water. I couldn’t breathe. I thought I would die.”

She estimated the wave to be about 13 feet high. It scattered her family, but everyone survived, including her husband, who was trapped inside the crushed driver’s side of the vehicle for hours.

The damage along the coast was extensive but also capricious. Some coastal villages were heavily damaged, while others in the region escaped largely unharmed.

Farther north, in the village of Sambolo, Halimi was playing cards outside his house on Saturday evening when a large wave crossed the road and came unusually close.

He and his friends didn’t realize it was the first wave of a tsunami. The water receded and they continued playing.

The next wave arrived a few minutes later and it was much larger, more than 12 feet high, he said. It swept him, his friends and his two grandchildren away.

His house suffered major damage but everyone in the group survived, including his 4-month-old grandson, Raka Septian Pratama, who was under a bed.

“That was a miracle,” Mr. Halimi said, “like God saved him.”