Home » Asia » ‘It Was Like a Zoo:’ Death on an Unruly, Overcrowded Everest

NEW DELHI — Ed Dohring, a doctor from Arizona, had dreamed his whole life of reaching the top of Mount Everest. But when he summited a few days ago, he was shocked by what he saw.

Climbers were pushing and shoving to take selfies. The flat part of the summit, which he estimated at about the size of two Ping-Pong tables, was packed with 15 or 20 people. To get up there, he had to wait hours in a line, chest to chest, one puffy jacket after the next, on an icy, rocky ridge with a several-thousand foot drop.

He even had to step around the frozen body of a woman who had just died.

“It was scary,” he said by telephone from Kathmandu, Nepal, where he was resting in a hotel room. “It was like a zoo.”

This has been one of the deadliest climbing seasons on Everest, with at least 10 deaths. And at least some seem to have been avoidable.

The problem hasn’t been avalanches, blizzards or high winds. Veteran climbers and industry leaders blame having too many people on the mountain, in general, and too many inexperienced climbers, in particular.

Fly-by-night adventure companies are taking up untrained climbers who pose a risk to everyone on the mountain. And the Nepalese government, hungry for every climbing dollar it can get, has issued more permits than Everest can safely handle, some experienced mountaineers say.

Add to that Everest’s inimitable appeal to a growing body of thrill-seekers the world over. And the fact that Nepal, one of Asia’s poorest nations and the site of most Everest climbs, has a long record of shoddy regulations, mismanagement and corruption.

The result is a crowded, unruly scene reminiscent of “Lord of the Flies” — at 29,000 feet. At that altitude, a delay of even an hour or two can mean life or death.

To reach the summit, climbers shed every pound of gear they can and take with them just enough canisters of compressed oxygen to make it to the top and back down. It is hard to think straight at that altitude, climbers say.

According to Sherpas and climbers, some of the deaths this year were caused by people getting held up in the long lines on the last 1,000 feet or so of the climb, unable to get up and down fast enough to replenish their oxygen supply. Others were simply not fit enough to be on the mountain in the first place. 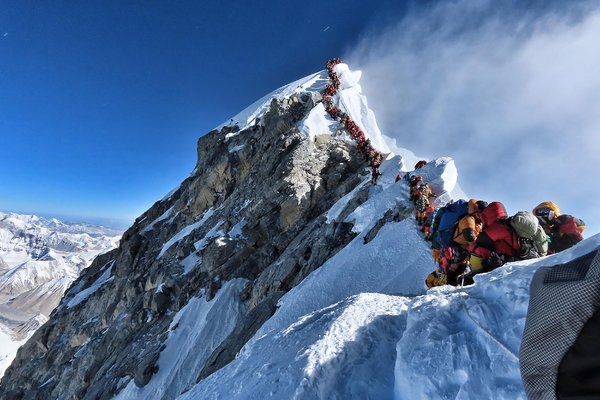 Some climbers did not even know how to put on a pair of crampons, clip-on spikes that increase traction on ice, Sherpas said.

Nepal has no strict rules about who can climb Everest, and veteran climbers say that is a recipe for disaster.

The last time 10 or more people died on Everest was in 2015, during an avalanche.

By some measures, the Everest machine has only gotten more out of control.

Climbers complain of theft and heaps of trash on the mountain. And earlier this year, government investigators uncovered vast problems with the lifesaving oxygen systems used by many climbers. Climbers said cylinders were found to be leaking, exploding or being improperly filled on a black market.

But despite complaints about safety lapses, this year the Nepali government issued a record number of permits, 381, as part of a bigger push to commercialize the mountain. Climbers say the permit numbers have been going up steadily each year and that this year the traffic jams were heavier than ever.

“This is not going to improve,” said Lukas Furtenbach, a guide who recently relocated his climbers to the Chinese side of Everest because of the overcrowding in Nepal and the surge of inexperienced climbers.

“There’s a lot of corruption in the Nepali government,” he said. “They take whatever they can get.”

Nepali officials denied any wrongdoing and said the trekking companies were the ones responsible for safety on the mountain.

Danduraj Ghimire, the director general of Nepal’s department of tourism, said in an interview on Sunday that the large number of deaths this year was not related to crowds, but because there were fewer good weather days for climbers to safely summit. He said the government was not inclined to change the number of permits.

“If you really want to limit the number of climbers,” Mr. Ghimire said, “let’s just end all expeditions on our holy mountain.”

To be sure, the race to the top is driven by the weather. May is the best time of the year to summit, but even then there are only a few days when it is clear enough and the winds are mild enough to make an attempt at the top.

But one of the critical problems this year, veterans say, seems to be the sheer number of people trying to reach the summit at the same time. And since there is no government traffic cop high on the mountain, the task of deciding when groups get to attempt their final ascent is left up to mountaineering companies.

Climbers themselves, experienced or not, are often so driven to finish their quest that they may keep going even if they see the dangers escalating.

A few decades ago, the people climbing Everest were largely experienced mountaineers willing to pay a lot of money. But in recent years, longtime climbers say, lower-cost operators working out of small storefronts in Kathmandu, the capital, and even more expensive foreign companies that don’t emphasize safety have entered the market and offered to take just about anyone to the top.

From interviews with several climbers, it seems that as the groups get closer to the summit, the pressures increase and some people lose their sense of decency.

Fatima Deryan, an experienced Lebanese mountaineer, was making her way to the summit recently when less experienced climbers started collapsing in front of her. Temperatures were dropping to -30 Celsius. Oxygen tanks were running low. And roughly 150 people were packed together, clipped to the same safety line.

“A lot of people were panicking, worrying about themselves — and nobody thinks about those who are collapsing,” Ms. Deryan said.

“It is a question of ethics,” she said. “We are all on oxygen. You figure out that if you help, you are going to die.”

She offered to help some of the sick people, she said, but then calculated she was beginning to endanger herself and kept going to the summit, which is currently measured at 29,029 feet. On the way back down, she had to fight her way again through the crowds.

“It was terrible,” she said.

Around the same time, Rizza Alee, an 18-year-old climber from Kashmir, a disputed territory between India and Pakistan, was making his way up the mountain. He said he was stunned by how little empathy people had for those who were struggling.

“I saw some people like they had no emotions,” he said. “I asked people for water and no one gave me any. People are really obsessed with the summit. They are ready to kill themselves for the summit.”

But Mr. Alee himself took some chances; he has a heart condition and says he “kind of lied” to his expedition company when they asked if he had any health issues.

Mr. Dohring, the American doctor, represents the other end of the spectrum.

At 62, he has climbed peaks all over the world. He read about explorers as a boy and said he had always wanted to get to the “one spot where you can stand higher than any place else on earth.’’

To prepare for Everest, he slept at home in a tent that simulated high-altitude conditions. His total Everest experience cost $70,000.

Still, there was only so much he could prepare for. Last month, when he hiked into base camp at Everest at an altitude of more than 17,000 feet, Mr. Dohring said he was overcome with awe.

“You look at a circle of mountain peaks above you and think, ‘What am I doing here?’’’ he said.

He pressed on. After long, cold days, he inched up a spiny trail to the summit early on Thursday and ran into crowds “aggressively jostling for pictures.”

He was so scared, he said, that he plunked down on the snow to keep from losing his balance and had his guide take a picture of him holding up a small sign that said, “Hi Mom Love You.’’

On the way down, he passed two more dead bodies in their tents.

“I was not prepared to see sick climbers being dragged down by the mountain by Sherpas or the surreal experience of finding dead bodies,” he said.

But on Sunday, he had made it out. He boarded a helicopter after reaching base camp and flew back to Kathmandu.

He counted his blisters at the Yak and Yeti Hotel, where he said he treated himself to a thick steak and cracked open a cold beer. “Everest Lager, of course,” he said.