TOKYO – Japanese Prime Minister Yoshihide Suga extended yet again a Covid-19 state of emergency on Friday (May 28), in a make-or-break gambit to drastically cut down infection numbers with a massively unpopular Olympic Games on the line.

The emergency, which was set to expire next Monday, will now stretch until June 20. This is barely a month before the marquee sporting event flags off on July 23, with media polls showing eight in 10 Japanese wanting the Games postponed or cancelled.

“There is a trend of infection numbers falling since the middle of the month, but it is not wise to let our guard down prematurely, looking at how numbers have rebounded from past experience,” Mr Suga told a news conference.

He cited risks such as more contagious coronavirus variants, while noting that the number of patients in serious condition continues to be very high.

But he said there was a silver lining in how vaccinations were starting to pick up speed, with mass inoculation centres having opened this week. The government has enlisted dentists and military medics in its effort to deliver one million shots a day by mid-June.

“I am sorry that the emergency is being extended and extended again. But these three weeks, through the twin approaches of vaccinations and infection control, will be of utmost critical importance,” he said, pleading for cooperation while pledging a “safe and secure Olympics”.

Yet it remains to be seen if this plea will fall on deaf ears. The public is exasperated by the constantly shifting goal posts and angered by recent comments from the International Olympic Committee that the Games were going ahead by hook or by crook, even if Japan was under an emergency.

The emergency first took effect on April 25, covering four areas – Tokyo, Osaka, Hyogo and Kyoto – with Mr Suga promising “intense and incisive measures” that would enable the decree to be lifted on May 11.

That did not happen. The emergency was then expanded, first to cover Aichi and Fukuoka, and then Hokkaido, Hiroshima and Okayama, until May 31.

The emergency was on Friday prolonged for three more weeks in these nine prefectures. In the 10th prefecture, Okinawa, the emergency began on Sunday and was already due to run until June 20.

Another eight areas are under “quasi-emergency” measures. This means that 18 out of Japan’s 47 prefectures are facing some form of Covid-19 restrictions, covering 86.1 million people, or 68.6 per cent of the population.

Japan reported 3,708 Covid-19 cases on Friday, down from a fourth wave peak of 7,236 cases on May 8. Tokyo added 614 cases, while Osaka, which just a month ago was the epicentre of the pandemic, logged 290 infections.

Some restrictions will be relaxed under the latest emergency extension, though food-and-beverage businesses are still expected to observe an 8pm dine-in curfew and an all-day ban on alcohol sales, or face a potential fine of up to 300,000 yen (S$3,600).

Many businesses are not complying, deciding that the windfall of satiating public demand is well worth forking out a possible fine. At least one company, Global-Dining, has taken the authorities to court over what it argues are unconstitutional limits on the right to do business.

There are neither enforceable rules nor fines for individuals, who are asked only to avoid non-essential outings and maskless conversations.

Dr Shigeru Omi, who chairs the government’s panel of medical experts, warned that mutant coronavirus variants pose a new challenge and lamented the growing ineffectiveness of a state of emergency in reducing people’s movement.

He said that the government should, rather than repeating “stay home” requests, instead look at implementing measures that people may accept such as providing subsidies for public areas to improve ventilation.

He added that Japan has not fully leveraged science and technology to bring down infections, with the need for wider vaccination and “more thorough and strategic” polymerase chain reaction (PCR) testing.

Japan has administered 11.2 million vaccination doses as at Thursday, when about 580,000 shots were doled out nationwide. Only 6.5 per cent of the population has received at least the first shot of a two-dose regime. 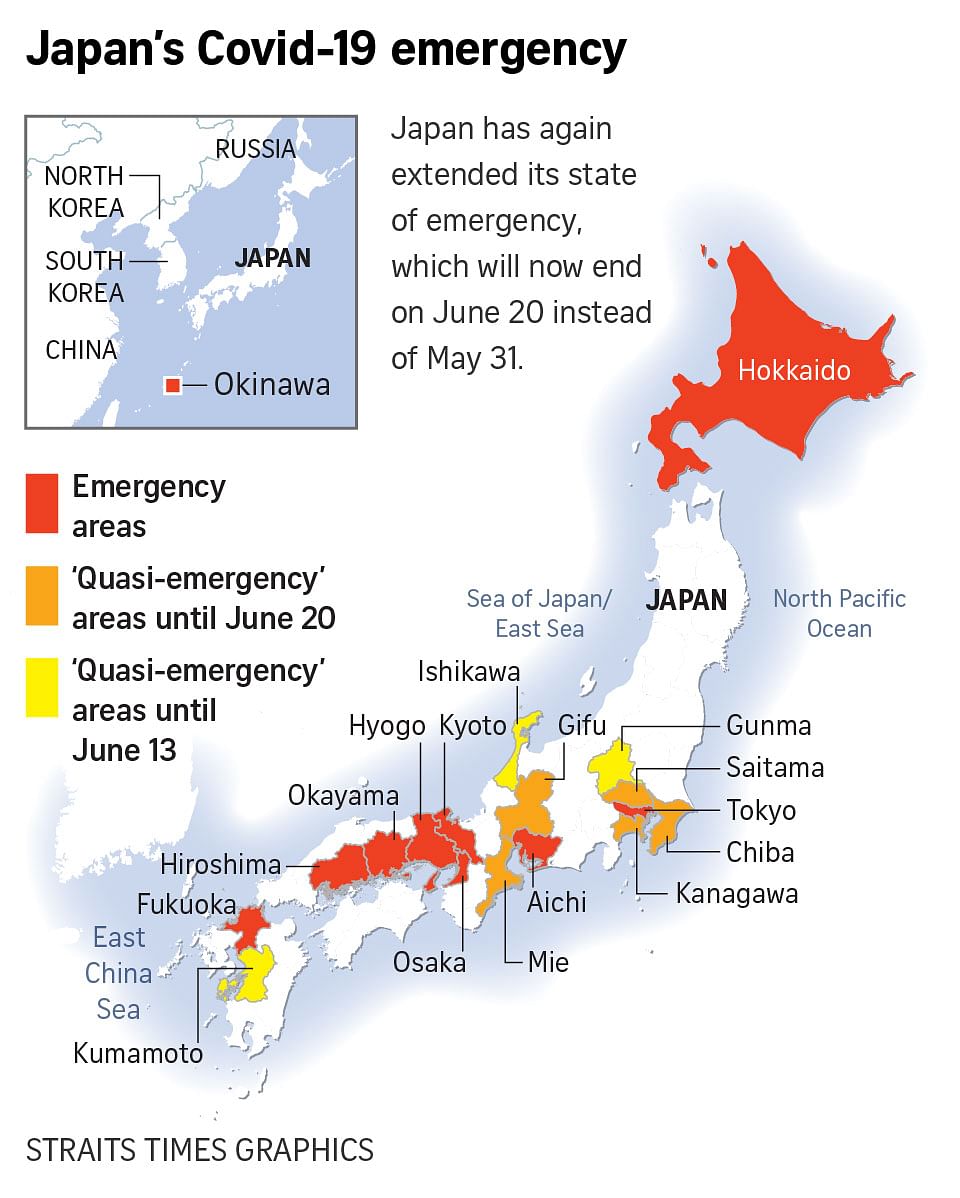