Taliban fighters poured into the Afghan capital on Sunday amid scenes of panic and chaos, bringing a swift and shocking close to the Afghan government and the 20-year American era in the country.

President Ashraf Ghani of Afghanistan fled the country, and a council of Afghan officials, including former President Hamid Karzai, said they would open negotiations with the Taliban over the shape of the insurgency’s takeover. By day’s end, the insurgents had all but officially sealed their control of the entire country.

The speed and violence of the Taliban sweep through the countryside and cities the previous week caught the American military and government flat-footed. Hastily arranged American military helicopter flights evacuated the sprawling American Embassy compound in Kabul, ferrying American diplomats and Afghan Embassy workers to the Kabul military airport. At the civilian airport next door, Afghans wept as they begged airline workers to put their families on outbound commercial flights even as most were grounded in favor of military aircraft. 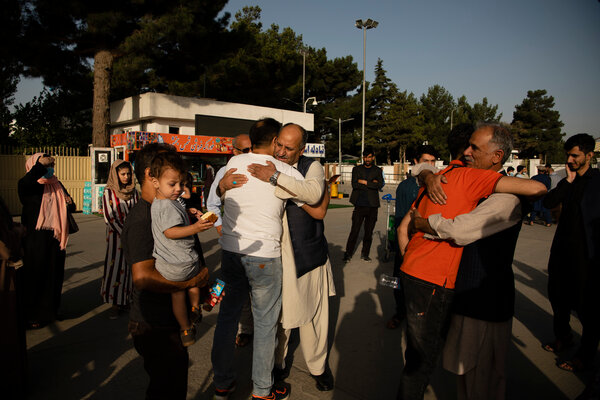 Amid occasional bursts of gunfire, the whump of American Chinook and Black Hawk helicopters overhead drowned out the thrum of traffic as the frenzied evacuation effort unfolded. Below, Kabul’s streets were jammed with vehicles as panic set off a race to leave the city.

Two decades after American troops invaded Afghanistan to root out Qaeda terrorists who attacked on Sept. 11, 2001, the American nation-building experiment was in ruins — undercut by misguided and often contradictory policies and by a relentless insurgency whose staying power had been profoundly underestimated by U.S. military planners.

The toll of war fell heavily on Afghan armed forces in recent years. But no amount of American training and matériel — at a cost of $83 billion — was sufficient to create a security force willing to fight and die for a besieged nation that American forces were leaving behind. Public declarations by, first, President Donald J. Trump and then President Biden calling for a quick and total troop pullout sent morale plummeting across Afghanistan.

In Washington, the speed of the collapse took the Biden administration by surprise, officials said — and left it with the realization that Mr. Biden will go down in history as the president who presided over a humiliating final act in a long and bedeviled American chapter in Afghanistan.

Now, Afghans suddenly face the prospect of complete domination by the Taliban again. In areas the insurgents have recently conquered, there is no sign they have turned away from the harsh Islamist code and rule by intimidation that characterized their government in the 1990s.

In the center of Kabul, people began painting over advertisements and posters of women at beauty salons, already fearing the return of the Taliban’s traditional bans against images of humans and against women appearing in public unveiled.

Inside the vacated presidential palace, Al Jazeera broadcast what the network described as a news briefing delivered by Taliban commanders flanked by fighters with assault weapons. The network quoted the fighters as saying they were working to secure Kabul so that leaders in Qatar and outside the capital could return safely.

At 6:30 p.m., the Taliban issued a statement that their forces were moving into police districts in order to maintain security in areas that had been abandoned by the government security forces. Zabiullah Mujahid, spokesman for the Taliban, posted the statement on his Twitter feed.

“The Islamic Emirate ordered its forces to enter the areas of Kabul city from which the enemy has left because there is risk of theft and robbery,” the statement said, using the Taliban’s name for their government. Taliban members had been ordered not to harm civilians or enter individual homes, it added. “Our forces are entering Kabul city with all caution.”

As darkness fell over Kabul, the United States Embassy warned Americans still in Kabul to shelter in place rather than trying to reach the airport. Witnesses at the civilian domestic terminal said they were hearing occasional gunshots nearby. Thousands of people had crammed into the terminal and filled the parking lots, desperately seeking flights out.

Inside the walled Green Zone in central Kabul, armored cars packed with diplomats, aid workers and private security contractors rushed to the American military command’s fortified compound near the embassy to be airlifted to Hamid Karzai International Airport. Others flocked to the Serena Hotel, a tightly secured hotel popular among foreigners.

As American and NATO troops began withdrawing in May, Afghan security forces swiftly collapsed, often surrendering without firing a shot. Many accepted Taliban offers of safe passage and cash, often relayed by village elders, and abandoned weapons and equipment confiscated by the Taliban.

“The inability of Afghan security forces to defend their country has played a very powerful role in what we’ve seen over the last few weeks,” Secretary of State Antony J. Blinken told NBC’s “Meet the Press” on Sunday.

The American Embassy, the epicenter of American nation-building efforts, was shuttered by the end of the day on Sunday after sensitive documents had been shredded or burned, officials said. The American flag was lowered and transferred to the military airport staging area.

At the former NATO Resolute Support landing zone near the U.S. Embassy compound, the deafening sound of helicopter after helicopter taking people out of the Green Zone reverberated across the small airfield.

The landing zone tarmac was packed with a constellation of uniforms from different nations. Contractors, diplomats and civilians were all trying to catch flights out. The United Nations Assistance Mission in Afghanistan moved its offices to the airport.

As helicopters landed one after another, military personnel handed out matchbox-size cardboard boxes with ear plugs and corralled people onto the choppers. Those who were eligible to fly were given special bracelets denoting their status as noncombatants.

But for millions of Afghans, including tens of thousands who assisted the U.S. efforts in the country for years, there were no bracelets. They were marooned in the city.

These were the scenes the Biden administration had hoped to avoid for fear of evoking comparisons to the desperate helicopter airlift of Americans and Vietnamese allies from a rooftop in Saigon as the city fell to North Vietnamese troops in April 1975.

Kabul’s streets were clogged to a standstill by cars and taxis loaded with luggage and personal items as thousands of Afghans raced to the airport. Some passengers abandoned their vehicles and trudged by foot, lugging their baggage through the rutted streets.

Bank guards fired into the air to scatter throngs of Afghans trying to withdraw cash from a branch that had shut down in central Kabul. Most shops were shuttered, cutting Afghans off from food and other supplies. Families crammed personal mementos and clothing into suitcases, then abandoned their homes as they pleaded and offered bribes to secure flights out of the city.

Some police officers stripped off their uniforms and melted into the civilian population. A New York Times journalist saw several policemen surrender to Taliban fighters. At Abdul Haq Square in the center of the capital, five men who appeared to be Taliban fighters gathered as cars drove by showing their support for the militants.

In a Twitter post addressed “Dear countrymen,” Mr. Ghani said he made the “hard choice” to leave Afghanistan in order to prevent bloodshed. He called on the Taliban to “protect the name and honor of Afghanistan.”

Mr. Ghani left in a plane for Uzbekistan with his wife, Rula Ghani, and two close aides, according to a member of the Afghan delegation in Doha, Qatar, that has been in peace negotiations with the Taliban since last year. The official asked not to identified speaking about the president’s movements.

Abdullah Abdullah, a bitter rival of Mr. Ghani who competed against him in the last two presidential elections, condemned Mr. Ghani for abandoning his countrymen at a moment of crisis. “God will call him to account, and the people of Afghanistan will make their judgment,” Mr. Abdullah, chairman of the Afghan delegation to peace talks in Qatar, said in a Facebook video.

Amid fears that the Taliban would shut down the independent news media in Kabul, as they have in other cities, local news outlets reported that the Taliban had invited them to broadcast the takeover of the presidential palace compound.

With rumors rife and reliable information hard to come by, the streets were filled with scenes of panic and desperation.

“Greetings, the Taliban have reached the city. We are escaping,” said Sahraa Karimi, the head of Afghan Film, in a post shared widely on Facebook. Filming herself as she fled on foot, out of breath and clutching at her head scarf, she shouted at others to escape while they could.

Early in the day, senior Afghan politicians were seen boarding planes at Kabul airport. Bagram Air Base was captured by Taliban forces midday on Sunday, as was the provincial town of Khost in eastern Afghanistan, according to Afghan news media reports.

The fall of two of Afghanistan’s most important cities — Mazar-i-Sharif in the north late Saturday and Jalalabad in the east on Sunday — would have been shocking a week ago, but both events were overshadowed Sunday by the panicked collapse of the government in Kabul.

On the city’s western reaches, a young man waving a white Taliban flag was directing traffic as crowds gathered to watch the spectacle. At least one Kabul police district was seen being captured by the militants.

And as the sun set behind the mountains, more Taliban fighters roared into the city on motorbikes, in police pickups and in one American-made Humvee seized from Afghan security forces. On top of a massive Coca-Cola billboard in the middle of a roundabout, the white Taliban flag fluttered in the dusk.

As buildings that once housed diplomats and large international organizations emptied, a group of plainclothes Afghan police officers wandering the Green Zone saw an opportunity. They knocked on the doors at one compound and asked an Afghan man there if the place was empty — it was their time to loot, the police officer told him.

It was only eight days ago that a remote provincial capital, Zaranj, in the far west, became the first to fall to the Taliban. Since then, one provincial capital after another has collapsed as the American-trained Afghan security forces surrendered, deserted or simply stripped off their uniforms and fled. Taliban videos showed militants driving American Humvees and waving M-16 rifles in the conquered cities.

At the Kabul airport on Sunday, two Marines standing on the tarmac acknowledged that they were living a moment of history. A little earlier, they said, they saw someone exit a helicopter while cradling a poorly folded American flag: It had just been lowered from the shuttered embassy compound.

Reporting was contributed by Carlotta Gall, David E. Sanger, Lara Jakes and other employees of The New York Times.

As India’s Election Wraps Up, a Village Is Caught Between 2 Parties