Home » Asia » Karachi Seeks to Remake Itself, With Bulldozers Leading the Way

KARACHI, Pakistan — For three generations, Muhammad Rizwan’s family saw their tiny market stall as their second home, the sons growing up there helping with the stock while their fathers dealt with customers.

Mr. Rizwan, 35, started selling shoes and clothing there as a teenager and had hoped to pass the business down to his son. Today it is a pile of rubble, the result of a government bulldozing operation that began around Karachi’s famous Empress Market and now stretches across the city.

“My grandfather was the first to work in this market — he sold rope back then — and now it seems like I’ll be the last,” Mr. Rizwan said.

The unofficial tent stalls that had long surrounded Empress Market are among the many sites targeted by the Karachi government’s “anti-encroachment” campaign against commerce that spills into the city’s streets and parks. Hawkers and informal structures have become an entrenched part of life in Karachi in the decades since it transformed from a quaint port village into one of the biggest cities in the world, with a population of at least 15 million.

They have also contributed to Karachi’s reputation as one of the world’s least livable cities. Waseem Akhtar, Karachi’s mayor of two years, is bent on changing that by demolishing what he says are unlicensed businesses that have been operating on public property, in some cases for decades. He is backed by an order from Pakistan’s Supreme Court. 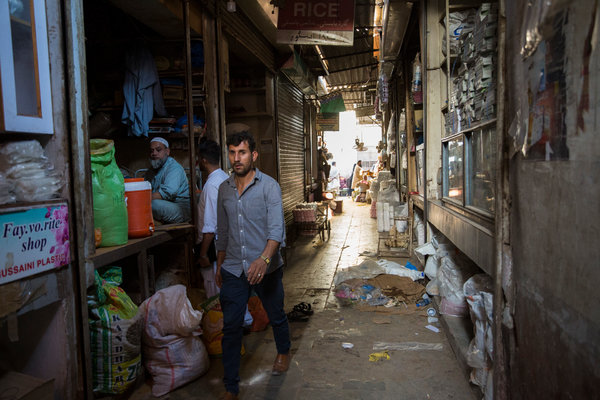 “We need open places. We need gardens, trees, public areas, benches,” Mr. Akhtar said in an interview. “The era of the concrete jungle has gone on for too long in Karachi.”

Plans to catapult Karachi — known for its chronic instability, ethnic violence and crumbling infrastructure — into modernity began with mass demolitions at the beating heart of the city’s commercial activity: Empress Market.

The market, which was built in the 1880s during British colonial rule, is made up of a square courtyard enclosed by four covered halls and a clock tower. Historians say the market stands on the site where dozens of South Asian soldiers were executed in 1857 during a failed uprising against the British.

The market was named after Queen Victoria, who was then the empress of India, to deter local residents from building a memorial there for the executed rebels.

Over the next century, Empress Market became the center of a bustling commercial area where the majority of the city’s professionals commuted daily. An informal tent market gradually appeared on its periphery, with hawkers selling products as varied as spices and rare birds.

Even as skyscrapers and modern shopping malls sprang up around it, Empress Market remained more or less the same, drawing shoppers of all income levels from all over the city. It survived some of Karachi’s most violent eras, including the frequent militant attacks of the last two decades and the military crackdown on gangs and terrorist organizations that began in 2013.

“Inside, you could find crafts and trades that have been wiped out elsewhere,” said Arif Hasan, a historian and an architect who has chronicled Karachi’s urbanization for decades. “The bird market, the bookbinders market, the dry fruit market, all stalls that have existed for well over 50 years.”

The stalls came crashing down in November, when city bulldozers razed them overnight. After being notified of the demolition plans a week or so beforehand, the hawkers, in protest, refused to leave and demonstrated right up until their stalls were knocked down.

“It was like a nightmare,” said Abdul Rashid Kakar, the owner of a tea stall. “I saw the place where I’ve worked the majority of my life disappear right in front of me.”

Legal stalls inside the building were demolished as well, with the government citing planned renovations. Mr. Kakar, Mr. Rizwan and hundreds of other displaced stall owners, some of whom also lived in their shops, have been protesting ever since.

“We have mouths to feed,” Mr. Rizwan said. “I’m ashamed to go home because I have nothing to give to my family.”

In spite of the demolition, some hawkers have resumed selling their wares in the rubble where their shops used to be.

The city government says that all stall owners with official rental agreements will eventually be rehoused. As for the others, “we can’t accommodate encroachers,” Mr. Akhtar said. “They were sitting there illegally. We are following the letter of the law.”

Residents were shocked when they woke up on Nov. 11 to find images of a gutted Empress Market interior circulating on social media. Commuters paused to gawk and take photos of the newly bared building, whose walls could not be seen from the street for more than 50 years.

Some were pleased: “Who knew such a nice building was behind all that,” said Muhammad Asif, a dishwasher who brought his wife on motorcycle to show her the state of the market.

But on social media and the local news, the demolition elicited outrage.

Even Mr. Aslam, though, acknowledged that the building itself was nice.

That was before the city’s bulldozers turned their attention to markets and settlements across Karachi.

Muhammad Toheed, an urban planning researcher working with the NED University of Engineering and Technology, has been following the anti-encroachment drive since it began in November. He estimated that 11,000 shops and stalls across some 20 markets had been affected, upending life for tens of thousands of families. Many of them continue to protest in front of the city’s press club.

In their wake, the bulldozers have left piles of rubble and confused residents who say they have no choice but to clean up the broken concrete and twisted metal themselves. Mr. Akhtar said that the city was trying to find the money to clean up the mess, “at least on its face,” but that he would continue to follow the Supreme Court order.

Mr. Toheed said the people affected were almost all from the working class.

“They barely make ends meet as it is,” he said. “They can’t afford rent in other parts of Karachi,” where rent has become unaffordable for even well-to-do families.

Mr. Toheed and others are scrambling to keep up with the bulldozers as they threaten new demolitions each week. One of the city’s oldest bookselling markets could be next.

“Of course cities change and there is encroachment all over the city,” Mr. Toheed said. “But the public and civil society need to know the big picture so we can plan accordingly. Right now, we find out just days before demolition, and then another one begins.”

In the meantime, Empress Market’s barren face has put residents in a solemn mood.

“We’ve lost our history,” said Mr. Hasan, who over the years has proposed several plans to revitalize Karachi’s downtown while maintaining its street culture. He said the authorities “have no concept of history and continuity. They are devoid of humanity.”

Mr. Akhtar said the demolitions were a sign that Karachi was finally returning to its former glory.

“Spices and lentils, parrots and pigeons — that isn’t heritage,” he said. “We need to have something to show for our next generation. I think we’re moving toward progress.”