Home » Asia » Latest Claim in the Effort Against Aung San Suu Kyi: A Bag of Cash

The Myanmar construction tycoon spoke in a faltering monotone, blinking fast and gulping occasionally for air. He said that over the past several years he had handed a total of $550,000 to Daw Aung San Suu Kyi, the civilian leader of Myanmar who was ousted in a military coup last month.

On two occasions, he had provided $100,000 and $150,000, the businessman said in a confessional statement broadcast on a military television network Wednesday night. In the English subtitles, the money had been handed over in a “black envelope.” In Burmese, the description had him presenting the money, meant to enhance his business ties, in a paper gift bag.

Either way, the envelope or gift bag would have been very large to hold that much cash.

The televised statement by U Maung Weik, a military crony who was once imprisoned for drug trafficking, appears to be the latest act in an intricately planned effort to impugn Ms. Aung San Suu Kyi.

Before elections in November, an online campaign amplified by pro-military groups raised a litany of unproven allegations against the civilian leader, who had shared power with the military for five years. Once her party won a landslide victory, military-linked forces stepped up their attacks on her, calling her corrupt and under the influence of foreigners.

Then, after the military staged its Feb. 1 coup, security forces detained individuals who had been named months earlier as key members of a foreign plot, blessed by Ms. Aung San Suu Kyi, to destabilize Myanmar. The chronology suggests a well-planned effort to rid the country of its most beloved leader. 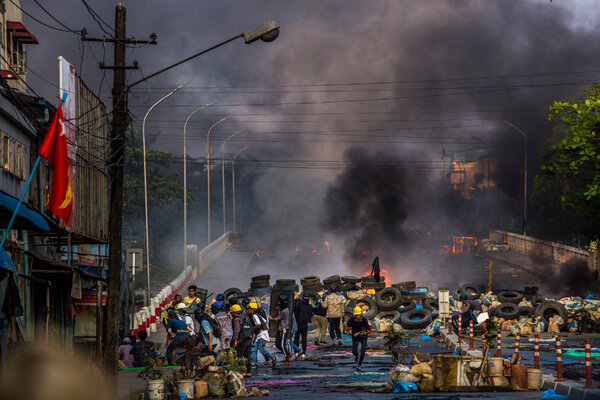 “We have seen their attempt to arrest Daw Aung San Suu Kyi since before the election,” said U Khin Maung Zaw, her lawyer. He has not been able to see his client nor has he been given power of attorney so he can formally handle her legal affairs.

Days before the November polls, the coordinated attacks on social media accused Ms. Aung San Suu Kyi and her governing National League for Democracy of illegally profiting from foreign funding. If the National League for Democracy is found guilty of having been tainted by foreign influence, the party could be disbanded, neutralizing the most popular political force in Myanmar’s history.

The targeted campaign — disseminated on Facebook, YouTube, a custom-built website and spoofed emails that shared similar branding and cross-posting — implied that a cabal of Western interests was working with the National League for Democracy to steal the elections and upend Myanmar governance. The custom-built website was developed from a folder named after the military’s proxy party, a digital forensics investigation found.

One of the pre-election posts claimed that the Daw Khin Kyi Foundation, a charity group set up in the name of Ms. Aung San Suu Kyi’s mother, was secretly working with the Open Society Foundation to destabilize Myanmar.

The implications of the social media attack became clearer this month. Mr. Maung Weik, the construction tycoon, claimed in the television broadcast on Wednesday that he had donated money to the charity. Last week, the military accused Ms. Aung San Suu Kyi of having siphoned off some money from the Daw Khin Kyi Foundation. At least two of the charity’s employees have been detained in recent weeks.

On Monday, the same military-controlled television network that broadcast Mr. Maung Weik’s statement announced that arrest warrants had been issued for 11 employees of Open Society Myanmar for aiding the anti-coup protest movement with, among other things, illegal bank transactions. The group’s finance manager has been detained.

Open Society Myanmar has denied that it acted illegally by withdrawing funds from its own local bank account.

Another pre-election social media attack pointed fingers at a deputy industry minister, a deputy finance minister and an Australian economic adviser to Ms. Aung San Suu Kyi, reproaching them for machinations to control the country. After the military ousted the civilian government last month, all three were detained.

The military’s takeover of power has galvanized tremendous pushback from the people of Myanmar. Since the coup, millions of people have demonstrated and participated in labor strikes against the regime.

The military has responded with the kind of violence normally reserved for the battlefield. In attacks on protesters, security forces have killed at least 215 people, mostly by gunshot, according to a local group that tallies political imprisonments and deaths; more than 2,000 people have been detained for political reasons since the coup.

This week, members of a group representing the disbanded Parliament were charged with high treason. So was Myanmar’s envoy to the United Nations, who gave an impassioned speech last month decrying the military’s seizure of power.

On Wednesday, the last of Myanmar’s major independent newspapers ceased publication. More than 30 journalists have been detained or pursued by authorities since the coup. The country, for decades under the military’s fist, is rapidly losing whatever democratic reforms had been introduced over the past few years.

Since Ms. Aung San Suu Kyi was locked up in a pre-dawn raid on the day of the coup, she has been formally charged with various crimes that could see her imprisoned for years. The charges include esoteric crimes such as illegally importing foreign walkie-talkies and contravening coronavirus regulations.

Ms. Aung San Suu Kyi has not yet been charged in relation to Mr. Maung Weik’s accusations that he gave her money to better his business relationship with the civilian government. The military television network said that investigators were currently looking into the case.

Last week, the military also accused her of illegally accepting 25 pounds of gold and about $600,000. Mr. Maung Weik’s accusations of money transfers are separate from this figure.

If charges are brought in any such cases, Ms. Aung San Suu Kyi, 75, could face life imprisonment.

“I 100 percent believe that their accusations against Daw Aung San Suu Kyi are groundless,” said U Aung Kyi Nyunt, a spokesman for the National League for Democracy.

Ms. Aung San Suu Kyi’s popularity in Myanmar far outstrips that of the generals who have controlled the country for most of the past 60 years. She spent 15 years under house arrest and won the Nobel Peace Prize for her commitment to nonviolent resistance.

While her international reputation faded after she defended the military’s ethnic cleansing campaign against Rohingya Muslims, her star appeal endured at home. The National League for Democracy’s electoral performance last year bested its 2015 landslide. The military has called fraud on the polls.