Aye Maung was sentenced for his so-called inflammatory speech in January 2018, a day before the deadly riots broke out. 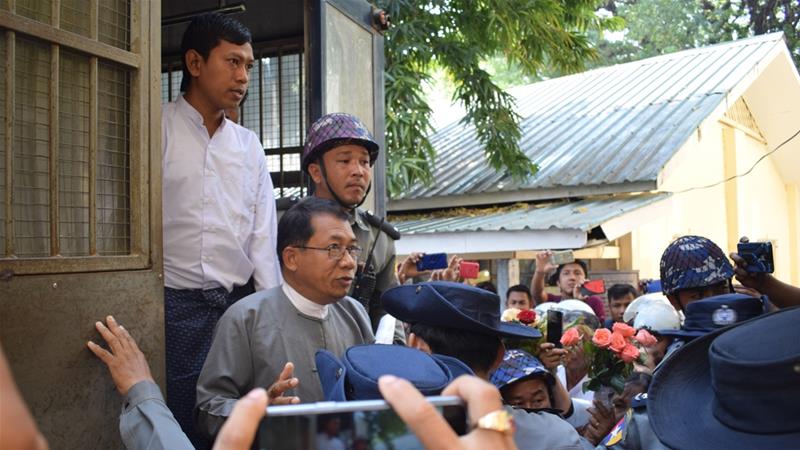 A Myanmar court has sentenced a prominent Rakhine leader to 20 years in jail for treason, a verdict likely to intensify anger amid fighting between the ethnic group and the army.

Security forces tried to calm hundreds of supporters outside the court in Rakhine state capital Sittwe as Aye Maung was escorted to a waiting police van following Tuesday’s verdict.

The lawyer said they were discussing whether to appeal. Treason can carry the death sentence.

Aye Maung, former chairman of the Arakan National Party – which is renowned for hardline views against the Rohingya Muslim minority, was sentenced for treason and defamation over his so-called inflammatory speech in January 2018, a day before the deadly riots broke out.

At the time, state-backed media said he railed against the central government for treating the ethnic Rakhine as “slaves” and said it was the “right time” for the community to launch an armed struggle.

Aye Maung and a fellow detainee, writer Wai Hin Aung who also gave a speech at the same rally, were arrested days later.

“Both Dr Aye Maung and writer Wai Hin Aung were sentenced to 20 years each… for the charge of high treason and two years each for defamation of the state,” Wai Hin Aung’s defence lawyer Aye Nu Sein told the AFP news agency.

A brutal military crackdown in 2017 forced around 740,000 Rohingya in Rakhine state across the border into Bangladesh.

A further 600,000 Rohingya remain in Rakhine state without citizenship, restricted to either camps or their villages, many unable to access medical care.

Yet, the ethnic Rakhine Buddhist population, some of whom are accused of aiding soldiers in the anti-Rohingya campaign, also feels marginalised by the state.

Supporters of the pair were enraged by the perceived persecution of two prominent Rakhine figures.

“This is not fair. This is oppression and bullying of ethnic Rakhine people,” one woman shouted in front of the court, as the protesters spread to the centre of the town.

In recent weeks, the military has waged war on the Arakan Army (AA), an armed group claiming to represent the ethnic Rakhine.

Much of northern Rakhine is in lockdown and information is difficult to verify independently.