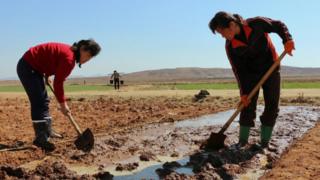 North Korea’s harvest is predicted to be worse than usual, exacerbating already severe food shortages in the country, a monitoring group says.

The UN says four in 10 North Koreans need food aid and crop production is at its lowest level in five years.

Shortages are made worse by international sanctions on North Korea over its weapons programme.

In May food rations – which feed about 70% of the North Korean population – were cut from 550g (19.5 oz) to just 300g per person following poor results in this year’s early harvest.

The country’s main harvest in the southern provinces of South and North Hwanghae and South Pyongyan was complete but was estimated to have produced a below-average quantity of crops, Geoglam said.

This was due to “irregular rainfall and low reservoir levels during the summer”, the organisation said, adding that North Korea’s overall food situation was not expected to improve.

North Korea experienced severe droughts in spring and summer, and in September the country was hit by Typhoon Lingling, which flooded farmland.

In September the UN’s Food and Agriculture Organisation (FAO) said poor rice and maize harvests had left more than 10 million people in urgent need of assistance.

The country has also had to cope with a regional outbreak of swine fever in its pig herd, leading to reduced pork production.

Earlier this year a UN team found families surviving “on a monotonous diet of rice and kimchi most of the year, eating very little protein”, according to a report by the World Food Programme. The report said some families were eating protein only a few times a year.

China and other countries have already provided North Korea with food aid so far this year.

However, North Korea has refused to accept 50,000 tonnes of rice from South Korea. This is reportedly because of tensions with the South linked to stalled talks between Pyongyang and the US over the North’s nuclear programme.

North Korea suffers regular food shortages. In the 1990s a severe nationwide famine is thought to have killed hundreds of thousands of people.

Be prepared for rough weather ahead, says PM Lee