Home » Asia » Nepal’s Animal-Sacrifice Festival Slays On. But Activists Are Having an Effect.

BARIYARPUR, Nepal — The animals were bused to southern Nepal in the thousands: rats, starved goats and pigeons stuffed in bags. 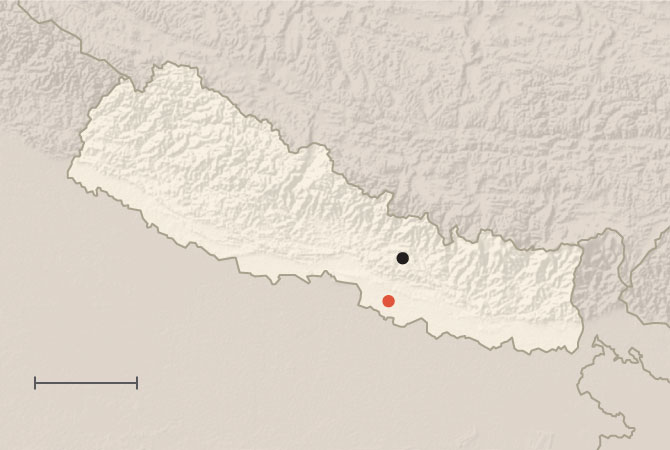 But that was just part of the sacrifice. A few hundred butchers then gathered on Tuesday with curved knives to decapitate water buffalo during what is believed to be the world’s largest ritual slaughter, the weekslong Gadhimai festival in the town of Bariyarpur, near Nepal’s southern border with India.

As the butchers hacked away in a closed arena about the size of a soccer field, devotees tried climbing walls topped with barbed wire to catch a glimpse.

“It’s always fun to behead animals,” said Ram Aashish Das, who said he had slaughtered 30 buffalo this week. “If the tradition is so bad, why are so many people coming here?”

For centuries, the story goes, thousands of animals have been sacrificed in the town every five years to appease the goddess Gadhimai, who many believe has the power to grant wishes. Hindu pilgrims have long made it a point to come witness the slaughter. (Though killing cows, a sacred animal to Hindus, is prohibited in parts of India and Nepal, slaughtering water buffalo does not carry the same taboo.)

But this year’s festival has played out differently. Nepal’s central government refused to fund the event, citing a Supreme Court ban on supporting animal sacrifices. In recent days, activists and police officials have gathered along Nepal’s border with India, from where many of the animals are illegally smuggled, and tried to block trucks from passing through.

Their efforts have paid off. In 2009, during a particularly brutal festival, up to 500,000 animals were slaughtered. Five years later, the number was reduced to 30,000. And on Tuesday, this year’s heaviest day for sacrifices, about 3,500 buffalo were killed, activists said. Those numbers will increase when the rest of the sacrificed animals are counted, but are unlikely to reach 30,000.

“The suffering of these animals is so upsetting,” Alokparna Sengupta, Humane Society International’s managing director in India, said in a statement. “They have endured exhausting journeys to get here and are paraded in front of a baying crowd as all around them they witness other animals being decapitated, one by one.”

Mr. Sengupta said his group had pleaded with the head priest at the Gadhimai temple to cancel the festival, reminding him of a pledge the temple made several years ago to end it, but that “he has chosen to do nothing as far as we are aware.”

On Monday, a day before the killings started, Manoj Gautam, a Nepali animal rights activist, filed a contempt-of-court case against the government and the temple committee for not doing more to stop the gathering. In 2014, India outlawed transporting animals across the border to the Gadhimai festival. Shortly after, Nepal’s Supreme Court banned officials from supporting the festival.

But those rulings have not fully curbed its popularity in Nepal, a mountainous, majority Hindu nation.

Early this week, hundreds of thousands of devotees, many from some of India and Nepal’s poorest villages, arrived in Bariyarpur on tractors and packed buses. Some walked barefoot for miles to pray to the goddess. Before the killings began, event supporters chased animal rights activists from a hotel, yelling at them that the tradition was an integral part of their religion.

“People come here with animals and fear that something bad may happen if their promise to the goddess is not delivered,” said Birendra Yadav, the secretary of the festival’s organizing committee. “We are not encouraging people to sacrifice animals, but neither can we reject it.”

Locals believe the Gadhimai festival started around 265 years ago, when a Nepali farmer called Bhagwan Chaudhary had a dream that his problems could be solved if he offered blood to the goddess Gadhimai. For the initial sacrifice, he lanced five points on his body.

Since then, the metrics have changed, with animal blood replacing human blood, and Mr. Chaudhary’s descendants assuming leadership positions in the temple. Today’s Gadhimai festival has become so popular that wealthy businessmen and politicians have constructed welcome signs along the road leading to Bariyarpur.

Despite security patrols along Nepal’s porous border with India, dozens of trucks arrived in town carrying animals shriveled from dehydration and lack of food. Buffalo were transported using tractors. Goats and pigeons were moved in containers strapped to the roofs of buses.

Though the festival lasts a few weeks, the slaughter typically takes place on the last two days. It begins with a sacrifice of the “pancha bali,” a set of five animals: a rat, a goat, a buffalo, a pig and a chicken.

At the entrance to the main arena, which was not accessible to the public, butchers carrying kukri knives whooped Tuesday morning as the temple’s committee read out their names. The crowd cheered as the men stepped inside the enclosure, where thousands of buffalo were eating grass and hay, to start the sacrifice.

About six hours later, when every buffalo had been killed, the butchers emerged from the arena with blood-soaked feet.

“Only good and happy people come here,” said Jaya Kumar Ram, a Nepali pilgrim standing outside the enclosure. “Because of blessings from the goddess, I have four children now and they are all in good health.”

They would bury the heads near the temple complex, and ship the skins and meat for sale in Kathmandu, Nepal’s capital. Then they would transform the field once again, into a ground for soccer and cricket matches.