SINGAPORE – Even after successfully leading a five-year-long, Unesco-award-winning restoration of Yueh Hai Ching Temple, conservator Yeo Kang Shua felt like that his work on the temple in Raffles Place was not done.

After all, the 46-year-old wears many hats, and being a conservator is just one. Researching the temple’s history for the restoration project, completed in 2014, left him with burning questions that stemmed from his other roles.

“If I was just a conservator, I would have done enough research for the restoration and just stopped,” said Dr Yeo, who added that conservators are primarily concerned with the preservation of cultural assets using authentic materials and techniques, with as little intervention as possible.

“But I’m also an academic and an architectural historian – and these other questions I had, they just made me want to find out more.”

In a newly launched book, Divine Custody: A History Of Singapore’s Oldest Teochew Temple, Dr Yeo tackles some of these questions, and also documents the restoration work that took place between 2010 and 2014, saving Wak Hai Cheng Bio – as it is known in Teochew – from termite damage and damp issues.

His research began in 2007, when he was first approached for a solution after an ornament fell off the temple’s roof truss. After the restoration project, he spent another three years on research, and the book’s first manuscript was ready in 2017.

One question that the Singapore University of Technology and Design associate professor sought to answer concerned the temple’s origin: How did it begin?

Scholars have yet to definitively date the temple’s founding, although anecdotal evidence has largely traced its beginning to the 1820s.

While a decade of research yielded little by way of a definitive answer, Dr Yeo’s research reinforced previous understandings about the temple’s genesis.

The National Heritage Board’s (NHB) heritage portal Roots says of the national monument without citing a source: “It is believed that a man named Lin Pan built a proper temple on the site of the makeshift shrine in 1826.”

Dr Yeo found additional confirmation of this date by chasing research leads, which led his team to a land register that was held in The British Library, from which they requested a copy.

The register of lands granted by the British, which dates the temple at 1826 or earlier, was published for the first time in Divine Custody. The register did not state who erected the temple. 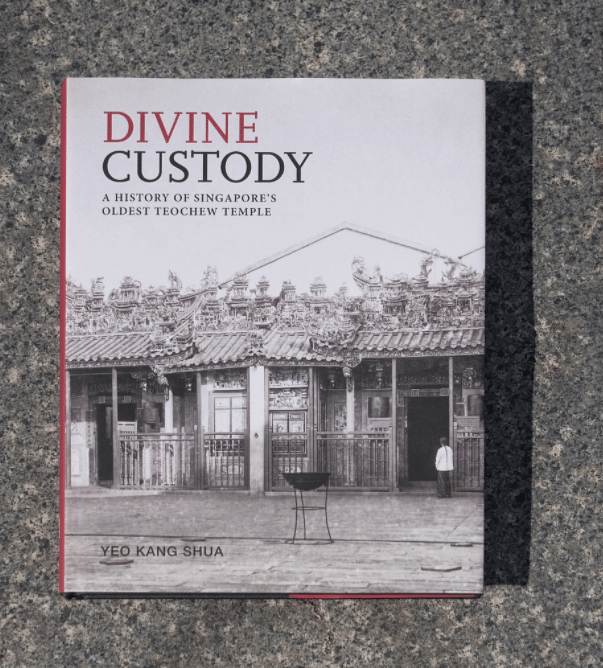 Dr Yeo said that finding new evidence like this “is a reminder that if we look hard and deep enough, we are able to find new material that bolsters our understanding of Singapore”.

Searching for answers to the temple’s origin and the community that it served also led him to question Teochew philanthropic organisation Ngee Ann Kongsi’s founding date.

While it is widely believed that the organisation, which manages Yueh Hai Ching Temple, was founded in 1845, Dr Yeo’s research found no documentary evidence of this. Instead, the earliest official record of the foundation – again a land document – dated it to 1872.

Without other historical sources to support the establishment of Ngee Ann Kongsi in 1845, the year should not be taken as the organisation’s founding year, argues Divine Custody.

When contacted, the organisation requested more time to respond.

The Ngee Ann Kongsi (Incorporation) Ordinance of 1933, by which the kongsi was incorporated, states that the organisation was formed “in or about the year 1845”.

About half the book is devoted to documenting the temple’s architectural changes over the years since it was rebuilt in 1895, as well as a detailed record of the award-winning restoration project.

In a blurb for the book, conservation expert William Chapman, who is a professor at the University of Hawaii in Manoa, calls it “a textbook in conservation methodology with application far beyond that of a single – though enormously significant – heritage site”.

He told ST: “The illustrations, including documentation necessary for the intervention, set high standards and provide access to the overall process of conservation.”

Asked about the book’s title, Dr Yeo said it reflects the temple’s dual but overlapping roles as a religious and heritage site.

“Whether it’s heritage or religion, both suggest that there is a duty for present generations to safekeep it for the next,” he said.

“So there’s the idea that you’re just the custodian, you don’t own the temple, but you’re just holding it in trust for the generation to come.”

The 272-page hardcover book, published by NUS Press, is available on the publisher’s website at $56. Its publication was supported by a grant from NHB.

Those who buy the book using the code “divcust20” enjoy a 20 per cent discount, valid until Oct 2.

N Korea: We won’t move on talks with Trump