SEOUL — As it ends its first high-level diplomatic tour of Asia on Thursday, the Biden administration is banking on international alliances in the region to help stem the growing threat posed by North Korea’s ballistic missiles and nuclear capabilities.

But the country that is perhaps in the best position to influence Pyongyang is one that President Biden has increasingly viewed as an adversary: China.

Following meetings this week in South Korea and Japan, the administration finds itself facing a diplomatic stalemate of the kind that irritated former President Barack Obama and drove former President Donald J. Trump to declare his love for Kim Jong-un, the leader of North Korea, in a manic but ultimately thwarted drive for a breakthrough.

At stake is the risk posed by North Korea’s weapons systems and its repressive domestic policies involving surveillance, torture and prison camps, which international officials have said amount to human rights violations. Recent attempts by the Biden administration to open a line of communication were rebuffed by North Korea, leaving American officials to appeal to its partners in the region to join a pressure campaign against Pyongyang.

“With regard to North Korea, the most important outreach, or engagement, is with our partners and allies — that’s a big part of the reason why we’re here,” Secretary of State Antony J. Blinken told reporters after talks in Seoul on Thursday with Defense Secretary Lloyd J. Austin III and South Korea’s foreign and defense ministers.

He said the Biden administration was consulting closely with the governments of South Korea, Japan and other allied nations “that are concerned by the actions that are being taken by North Korea.”

But China is North Korea’s chief financial and political benefactor, and Mr. Blinken acknowledged that Beijing “has a critical role to play” in any diplomatic effort with Pyongyang. He suggested China was also concerned about North Korea’s nuclear and missiles programs.

“China has a real interest in helping to deal with this,” Mr. Blinken said. “So we look to Beijing to play a role in advancing what is, I think, in everyone’s interests.”

Whether the United States can recruit Beijing to participate will be clearer after talks later on Thursday and on Friday in Anchorage, Alaska, when China’s top two diplomats meet with Mr. Blinken and the White House national security adviser, Jake Sullivan. American officials have billed the talks as a blunt exchange of policy views.

How to contain North Korea will be among the issues discussed in Anchorage. It is one of the few areas in which American officials believe they can cooperate with China as the Biden administration continues to confront Beijing’s military expansionism, its crackdown on democracy and its economic coercion in the Indo-Pacific region.

Mr. Blinken has previously described China as America’s “biggest geopolitical test of the 21st century,” and the Biden administration has issued stern warnings and financial sanctions against Beijing, including on Wednesday, in response to some of its actions. 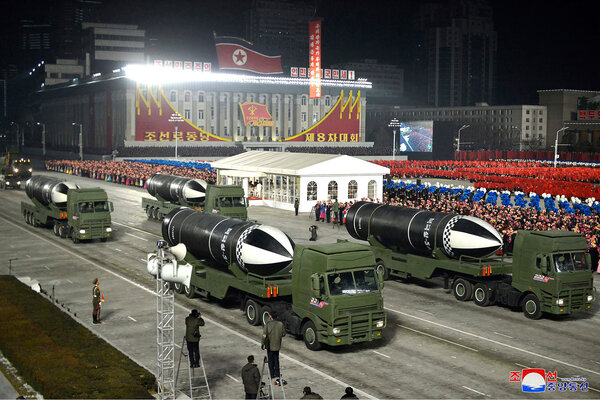 “It’s reasonable to try and enlist China’s support, given its political and economic relationship with North Korea and its overall heft in the region,” said Frank Aum, a North Korea expert at the U.S. Institute of Peace in Washington.

But Mr. Aum also noted that China has no control over a raft of demands North Korea has made in return for disarmament, including the lifting of American sanctions and an end to joint U.S.-South Korean military exercises.

President Moon Jae-in of South Korea is eager for the United States to restart diplomatic discussions with North Korea and other regional powers. He has repeatedly argued that a nuclear-free Korean Peninsula is possible, insisting that Mr. Kim is willing to give up his weapons and focus on economic growth should Washington provide the right incentives.

After meeting with the American envoys, Foreign Minister Chung Eui-yong of South Korea said he hoped for an “early resumption of dialogue” between the United States and North Korea, and that the government in Seoul would continue to support Washington’s efforts to establish diplomatic contact with Pyongyang.

He also suggested that Mr. Trump’s direct diplomatic approach had provided “basic principles” on how to achieve denuclearization and peace on the Korean Peninsula.

“Our experience in the past three years has proved that if North Korea is persistently engaged based on a close cooperation between South Korea and the United States, it is possible to resolve the nuclear problem,” Mr. Chung said.

It has been more than a year since North Korea has directly spoken to American officials, Mr. Blinken said in Tokyo. And the meetings in Seoul this week were the first between South Korean foreign and defense ministers and their American counterparts in five years.

Mr. Moon’s political stock rose when he helped to bring Mr. Trump and Mr. Kim together for two summits. But after the second, in 2019, abruptly ended without an agreement on American sanctions relief or the pace of North Korean disarmament, Mr. Moon struggled to regain his relevance in negotiations. Last June, North Korea blew up the joint inter-Korean liaison office on its side of the border, the first of a series of actions that threatened to reverse a fragile détente.

Officials in North Korea will dismiss Washington’s attempts to establish dialogue “unless the U.S. rolls back its hostile policy,” Choe Son-hui, the country’s first vice foreign minister, said on Thursday. “Therefore, we will disregard such an attempt by the U.S. in the future, too.”

Ms. Choe cited military exercises the United States has held with South Korea and talk in Washington of imposing more sanctions on the North as examples of that hostility. In a diatribe issued hours after the senior American envoys landed in Tokyo earlier this week, North Korea warned the Biden administration to “refrain from causing a stink.”

North Korea has not conducted any weapons tests since it launched short-range missiles in March of last year. But during a military parade in October, it unveiled a new, untested intercontinental ballistic missile that looked bigger and more powerful than the I.C.B.M. it tested in late 2017 before Mr. Kim started diplomacy with Mr. Trump.

In a party meeting in January, Mr. Kim vowed to further advance his country’s nuclear capabilities, declaring that it would build new solid-fuel I.C.B.M.s and make its nuclear warheads lighter and more precise.

Analysts said Pyongyang was closely following this week’s trips by Mr. Blinken and Mr. Austin to Tokyo and Seoul for clues to the Biden administration’s approach. It is expected that North Korea will decide after watching Washington whether to resume weapons tests and create a new cycle of tensions to gain leverage.

Mr. Moon is anxious to salvage his once-proud diplomacy over North Korea. His meeting on Thursday with Mr. Blinken and Mr. Austin was meant to deliver “a strong message, demanding that the United States be more flexible toward engaging North Korea with dialogue,” said Lee Byong-chul, a North Korea expert at Kyungnam University’s Institute for Far Eastern Studies in Seoul.

“North Korea’s sentiment toward Moon Jae-in is one of disappointment,” Mr. Lee said. “Moon has been in a fix ever since the North Korea-United States talks broke down.”

Mr. Blinken said the American posture toward North Korea would include a mix of regional pressure options and the potential for future diplomacy when the Biden administration’s current policy review is concluded, as soon as next month.

Mr. Aum, the North Korea expert at the U.S. Institute of Peace, said that the policy could include plying China to do more to rein in North Korea, potentially by deploying additional weapons systems in the region or conducting larger military exercises with South Korea — both of which would irritate Beijing.

China has largely urged North Korea and the United States to resolve the impasse themselves, although it has called for sanctions relief and a pause of American military exercises with Seoul in exchange for Pyongyang freezing its nuclear and missile tests.

“All parties should work together to sustain peace and stability on the Korean Peninsula,” a spokesman for China’s Ministry of Foreign Affairs, Zhao Lijian, said this week. “China will continue to play a constructive role in this process.”

Generation Grit: Hi, I'm Jed – like Jedi without the 'eye'

China has culled more than 900,000 pigs due to African swine fever