The Myanmar military’s disinformation was crude but effective.

Army propagandists claimed an ethnic group called the Rohingya was burning down its own villages and wanted to swamp Buddhist-majority Myanmar with Islamic hordes. The Rohingya were spinning tall tales, the military said in 2017, about soldiers committing mass rape and murder.

The truth — that troops were waging genocidal operations against Myanmar’s ethnic minorities — was perhaps too shocking for some members of the country’s Bamar ethnic majority to contemplate.

But as Myanmar’s military seized power this year and killed more than 750 civilians, Daw Sandar Myo, an elementary-school teacher, realized that the decades of persecution suffered by the Rohingya and other minorities was real, after all.

“After the coup, I saw soldiers and police killing and torturing people in the cities,” she said. “Then I started to feel empathy for Rohingya and ethnic people who have been suffering worse than us for many years.”

The Bamar majority’s most visible resistance to the Feb. 1 putsch has come in the form of mass protests, civil disobedience, worker strikes and even the tentative beginnings of an armed struggle.

But another transformation is quietly underway: a growing acceptance of the nation’s ethnic diversity, something that was notably absent during an earlier political transition. With the military’s violence unleashed once again, some are acknowledging that democracy cannot flourish without respecting the ethnic minorities who have endured decades of persecution.

More than a third of Myanmar’s population is composed of ethnic minorities, who inhabit a vast frontier where the country’s natural resources are concentrated. Their insurgencies against the Myanmar military, which has ruled the country for most of the past six decades, rank among the world’s most enduring civil conflicts. 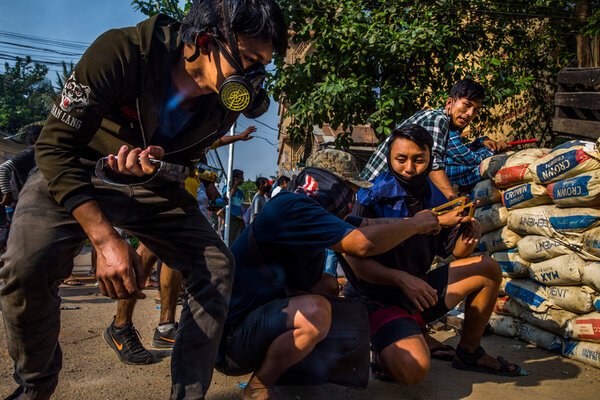 These ethnic minorities offer important insights on how to fight the Tatmadaw, as the military is known. And they say they know better than the Bamar just how unstable Myanmar can be when its armed forces act as an occupying force rather than the people’s protector.

“Myanmar never had real democracy because there was no hope for ethnic people,” said Lieut. Col. Mai Aik Kyaw, a spokesman for the Ta’ang National Liberation Army, one of the ethnic insurgencies struggling for autonomy in Myanmar. “If you compare it to what ethnic people have suffered for 70 years, what Bamar people are suffering right now is nothing.”

With the military’s power grab, Myanmar is careening toward full-fledged civil war, the United Nations has warned. The country could even disintegrate, it said.

“Myanmar stands at the brink of state failure, of state collapse,” Richard Horsey, a senior adviser on Myanmar for the International Crisis Group, told the United Nations Security Council in a briefing this month. But, Mr. Horsey added, Myanmar’s existential crisis in the wake of the coup has catalyzed a national reckoning on ethnicity that could lead to a more inclusive, cohesive country.

“In the midst of all this horror, the transformative nature of the resistance against the military has to be acknowledged and applauded,” he said. “A new generation of political action has emerged that has transcended old divisions and old prejudices and gives great hope for a future Myanmar that embraces, and is at peace with, its diversity.”

Earlier this month, a shadow civilian government was established to oppose the military junta, which has imprisoned most of the country’s elected leaders, including Daw Aung San Suu Kyi.

For the first time in the country’s history, the National Unity Government, as the shadow authority is called, has openly endorsed federalism rather than a centralized authority. A constitution that enshrines federalism could help free ethnic minorities from the Bamar supremacy that has dominated politics in Myanmar since the country was founded in 1948.

The National League for Democracy is the only nationally popular political force in Myanmar, but it has a recent history of abetting the persecution of ethnic minorities. Although the party won a landslide re-election in November, more than a million members of ethnic minorities were disenfranchised during the vote.

During their five years of power-sharing with the Tatmadaw, the N.L.D.’s civilian leaders defended the military’s continuing atrocities against ethnic minorities. Decades ago, Ms. Aung San Suu Kyi was awarded a Nobel Peace Prize for her nonviolent struggle for democracy. Yet she called the 2017 forced exodus of three-quarters of a million Rohingya the byproduct of “clearance operations” against a terrorist insurgency. The Rohingya were, in fact, victims of a well-documented ethnic cleansing campaign.

But the military’s seizure of power has led to soul-searching.

“The blood that has been shed in the aftermath of the coup has brought about a sea change in public views on federalism and inclusion,” said U Khin Zaw Win, a political analyst and former political prisoner who has long pushed for the rights of ethnic groups in Myanmar.

“While the N.L.D. does remain popular, the country has moved on” since the coup, he added. “It isn’t about an N.L.D. restoration any longer.”

So far, the new unity government is little more than a compendium of policy statements sent by encrypted apps. It has no army or international recognition.

If it is to succeed, it will need support from the very ethnic minorities who have been persecuted for so long.

Already, members of the shadow government have sought sanctuary in Myanmar’s borderlands, where ethnic insurgencies control territory. Young activists are undergoing weapons training in these frontier regions to form an armed resistance to the Tatmadaw. Recent explosions at urban government offices and military-linked businesses signal their intent.

Joining forces with ethnic minorities involves other tactical considerations. Around the time of the coup, many of Myanmar’s most fearsome infantry divisions were transferred from remote bases to cities. Since then, security forces have killed dozens of children with single gunshots. Pro-democracy figures have turned up dead, some with signs of torture.

With the Tatmadaw preoccupied in the cities, ethnic armed groups have launched their own coordinated offensives in the borderlands. Scores of Tatmadaw soldiers were killed in recent fighting when insurgents overran their outposts, according to the ethnic armed organizations and local residents.

The hope is that with ethnic militias pushing in the borderlands and an armed resistance rising in the cities, the Tatmadaw will be forced to battle on multiple fronts.

“If the ethnic armed organizations fight together against the Myanmar military, then it will have better results for the country,” said Colonel Mai Aik Kyaw of the Ta’ang National Liberation Army.

But unity is fleeting among the ethnic armed groups, some of which have reserved as much firepower for each other as they have for the Tatmadaw. Many of the major ethnic groups, such as the Shan and Karen, have more than one armed organization purporting to represent them. Control of these borderlands means access to lucrative mines, forests and illicit drugmaking facilities.

Myanmar is a crossroads culture, squeezed between India and China. Even the notion of Bamar purity is contested. Ms. Aung San Suu Kyi is part Karen. Other Bamar have Indian or Chinese ancestry. The British, who colonized what was then known as Burma, called the country “a zone of racial instability,” according to Thant Myint-U, a historian and author of “The Hidden Histories of Burma.”

“Myanmar was never a place of neatly packaged racial and ethnic categories,” he said. “Ending Bamar political domination of minority communities may be helped by a more decentralized system of government. But what’s equally important is a radical program to end discrimination in all forms and a reimagining of the country as a place that’s always been home to many different peoples.”

This week, soldiers from the Karen National Liberation Army overran a Tatmadaw outpost across the river from Thailand. Karen forces captured another base in eastern Myanmar last month, prompting the military’s first airstrikes against Karen villages in 20 years. Tatmadaw reprisals in areas populated by ethnic minorities have killed dozens.

As fighting intensifies, tens of thousands have been displaced nationwide, particularly in Karen territory and in the north, where the Kachin Independence Army is making inroads against the Tatmadaw.

For the first time, the Karen National Union has received donations from Bamar people for civilian victims of the Tatmadaw, said Padoh Saw Man Man, a spokesman for the group. “Now we are united with the Bamar people, and I strongly believe that we will win when we fight together against the Tatmadaw,” he said.

Venezuela loses $1.4 billion of gold to banks for guarantees: sources