ISLAMABAD, Pakistan — A former president of Pakistan was arrested by anti-corruption officials on Monday in a money-laundering case after a high court rejected his request for bail, moves that his supporters called politically motivated.

The former president, Asif Ali Zardari, the widower of Benazir Bhutto, the former prime minister who was assassinated in 2007, has been accused, along with his sister, of owning a company that received suspicious transactions through fake bank accounts.

He is currently a member of the national assembly, and of the opposition Pakistan People’s Party led by his son.

Members of Mr. Zardari’s party say Prime Minister Imran Khan, who won the general elections last year on an anti-corruption platform, is carrying out retribution against Mr. Zardari, and is going after leading opposition politicians to distract attention from his government’s dismal performance on the economy.

Government officials denied Monday that they had any role in the arrest of Mr. Zardari, saying it was an independent decision of the National Accountability Bureau, or N.A.B., an anti-corruption watchdog, after the court denied Mr. Zardari’s request for bail.

Mr. Khan’s government is grappling with a huge debt crisis and recently entered into a $6 billion bailout program with the International Monetary Fund. On Tuesday, his government will present the budget, which is widely expected to further burden a struggling population through increased taxes and cuts in subsidies.

“Arresting President Zardari during an investigative stage when he has been appearing respectfully before every court and N.A.B. office at every hearing smacks of political vendetta,” said Sherry Rehman, a senator belonging to Mr. Zardari’s party.

“He was neither a flight risk nor an absconder from the court and had been diligent in his responses, so the arrest is designed to target Imran Khan’s political opponents,” Ms. Rehman said. 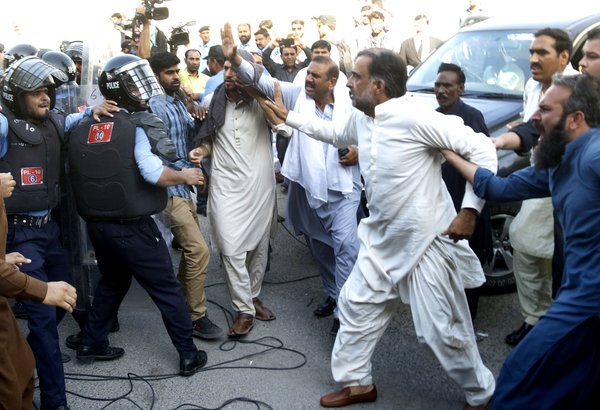 “It is obvious that this government is floundering in the face of real governance, and have lost their nerve in the eve of a catastrophic budget that they are about to present,” she said.

Mr. Zardari became president in 2008 for a five-year term. Before that, he spent 11 years in jail on corruption and murder charges. He was never convicted and has maintained his innocence.

Mr. Zardari has a reputation for adroit political maneuvering and back-room deals. But his career has been tarnished with repeated accusations of corruption.

In the 1990s, during Ms. Bhutto’s first term as prime minister, Mr. Zardari, who was a federal minister in his wife’s government, gained notoriety with the nickname “Mr. 10 Percent,” a reference to accusations that he demanded a 10 percent share in dubious government deals.

Later, critics and law-enforcement officials say, he amassed enormous wealth through an elaborate and extensive network of frontmen and companies.

But his supporters credit Mr. Zardari with giving more autonomy to the provinces during his time as president and giving up the vast powers the office of the president enjoyed, including the power to dismiss a government. They say he has been vilified in an effort to diminish his political successes.

Mr. Zardari was taken into custody as his party leaders and workers chanted slogans in his favor. Before getting into a black S.U.V., he hugged one of his two daughters, Aseefa Bhutto Zardari, and his son and political heir, Bilawal Bhutto Zardari, who is the chairman of the Pakistan People’s Party.

“There will be a strong response by the party, both inside and outside Parliament,” Ms. Rehman, the senator said, adding that the party was already in touch with other opposition political parties to start a street protest campaign against the government’s policies. “The government has created a perfect storm for itself.”

Softbank Group in talks to buy 5% stake in Wirecard: Bloomberg