Home » Asia » Polio Vaccinator Is Shot and Killed in Pakistan

ISLAMABAD — Two gunmen on motorcycle shot and killed a polio vaccinator in the southwestern Pakistani city of Chaman on Thursday, bringing the death toll among vaccinators working in the country’s anti-polio drive to at least three this week, officials said.

The shooters opened fire on a group of vaccinators when they were at the front gate of a house in the remote village of Sultan Zai, near the border with Afghanistan, said Samiullah Agha, who is the assistant commissioner of Chaman.

Two members of the vaccination team were hit: Nasreen Bibi, 35, was killed, and Rashida Afzal, 24, was critically wounded, Mr. Agha said in an interview. Vaccination was suspended for an indeterminate period of time in the Chaman area after the shooting.

“The gunmen fled after the attack,” Mr. Agha added. “Security forces have launched a search operation in the area.”

Polio vaccination teams have suffered several attacks since a countrywide vaccination drive began on April 23. Polio workers, volunteers and their guards are frequently targeted in the South Asian country. Islamist militants and hard-line clerics say the vaccination drive is a foreign plot to sterilize Muslim children and a cover for western spies.

“These are unfortunate incidents,” said Babar Atta, who is the special adviser on polio to Imran Khan, Pakistan’s prime minister. “We have increased the security of vaccination teams across the country and are determined to end this crippling disease in Pakistan.”

Hayat Khan, a resident of a tribal area bordering Afghanistan who runs a shop, said he is skeptical of the polio vaccine. Neither he nor his parents have taken the vaccine, which can be delivered orally as drops, and they are living a healthy life, he said.

“We have doubts in our minds about this western vaccine,” he said. “Tribal people are not sure what they are giving to our children and what information they are collecting for spying. It’s a Western agenda, indeed.” 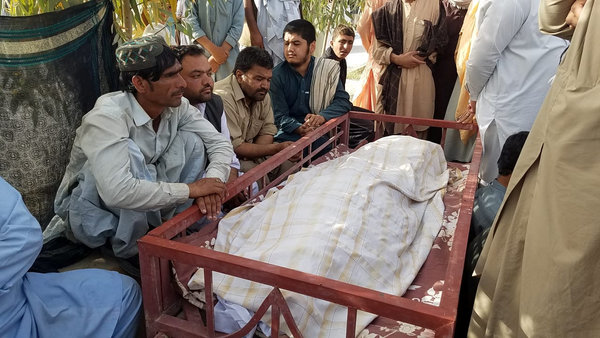 Two days ago, in separate events, two police officers who were protecting polio vaccination teams were shot and killed in the northern districts of Buner and Bannu. And a polio worker was injured in a knife attack this week in the eastern city of Lahore.

“We should be concerned about the killing of polio workers as it is adding more global pressure on us,” said Ms. Ayaz, who is a member of the secular Awami National Party. “It is mandatory now to introduce a comprehensive policy or legislation to get rid of crippling polio disease in the country.”

Recently the government has started public education campaigns on the issue, and urged Muslim clerics to inform the population that the vaccine protects children from a disease that can lead to paralysis or death.

A global effort to eradicate the disease left Pakistan, Afghanistan and Nigeria as the only countries that have not stopped the transmission of the polio virus, according to the World Health Organization.

The number of polio cases in Pakistan jumped to eight this year after two new cases were found this week, according to the website End Polio Pakistan, which shows the country’s polio elimination efforts.

The number of cases of the disease in the country dropped to 12 in 2018 from 58 in 2012, according to End Polio Pakistan. According to an independent tally by the news media, 95 polio workers have been killed doing their work since 2012.

This is despite the fact that vaccination efforts in Pakistan have often been the subject of suspicion and unfounded rumors that suggest the vaccines harm children.

More than 25,000 children were rushed to hospitals in northwestern Pakistan on Monday after false rumors that polio drops were making children sick, creating a panic.

A man, Nazar Gul, was detained this month on suspicion of conspiring against the polio vaccination campaign after a video went viral that showed Mr. Gul urging students to pretend to faint after immunization.