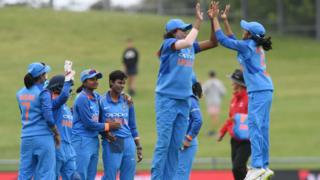 Indian police have registered a case against two alleged bookies for approaching a cricketer from the women’s national team to fix matches.

The alleged incident took place in February before the start of a limited-overs series against England.

India’s sports betting industry is among the world’s largest, with estimates ranging from $45bn to $150bn.

The two men approached the female cricketer pretending to be sports managers. She is believed to have recorded the phone call she had with Mr Bafna, which she later reported to the Board of Control for Cricket in India (BCCI).

It’s unclear when she reported the incident to the board but the board alerted the police on Monday.

“People involved in betting just need any cricket match. For them, it does not matter at what level it is being played,” Ajit Singh Shekhawat, a BCCI official, told local media.

He said that the incident shows that women cricketers are just as exposed to bookmakers as their male counterparts, and should be equally cautious.

News reports suggest that more than $190m worth of bets are placed on a single one-day international match involving the Indian national cricket team.

Indian cricket has been hit by match-fixing scandals in the past, which included the involvement of the former captain of the men’s national team, Mohammad Azharuddin.

The lucrative Indian Premier League (IPL) too has been marred by similar allegations – and committees headed by Indian judges have found that several figures involved in the IPL were guilty of match-fixing and illegal betting.

Massacred at Home, in Misery Abroad, 730,000 Rohingya Are Mired in Hopelessness