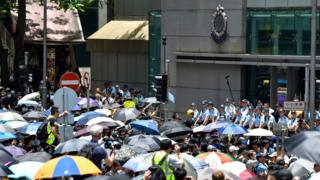 Thousands of people in Hong Kong have surrounded police headquarters, calling for an extradition bill to be scrapped.

Police have asked the protesters to withdraw peacefully, saying their presence would “seriously affect” emergency services.

Millions of people have marched against the bill in recent weeks, with violent clashes breaking out with police.

The bill, which allows extradition to mainland China, has already been suspended.

Critics say it would erode the judicial independence of Hong Kong.

Hong Kong has been part of China since 1997 under the “one country, two systems” principle, which allows it freedoms not seen in mainland China.

Early on Friday morning, a large group of protesters began gathering outside the Legislative Council (LegCo).

The protest comes a day after the government ignored a deadline set by a group of students from various universities in Hong Kong, who called for the bill to be completely scrapped.

The BBC’s Helier Cheung, who is at the scene, said the mood on Friday morning was relatively calm.

But then prominent activist Joshua Wong called for people to march towards the police headquarters.

They began putting on face masks and started chanting for Hong Kong leader Carrie Lam to step down.

Mr Wong, in a tweet on Friday, called for police to drop charges against people who had been arrested in earlier protests.

He also urged Hong Kong Police Commissioner Stephen Lo to “come down and face the people”.

I am now outside the police HQ with fellow Hong Kongers. We urge Police Commissioner Stephen Lo to come down and FACE THE PEOPLE! Protesters are NOT rioters. Drop all political prosecution. Hold the police accountable! pic.twitter.com/rjwiBHSjtH

As of Friday lunchtime local time, the protests were considerably smaller than those seen in recent weeks.

Organisers estimate that millions in the city have taken part in protests, with one seeing an estimated turnout of two million people.

While the rallies have been largely peaceful, one march on 12 June descended into violent clashes between protesters and police. It saw dozens injured after police tried to clear the protesters with tear gas and rubber bullets.

Police labelled that protest a riot – an offence punishable by up to 10 years in jail.

A total of 32 protesters were arrested, five of whom have been charged with rioting offences. Eight protesters have been released.

The strong backlash prompted Hong Kong leader Carrie Lam to eventually suspend the bill. She issued a public apology and said the bill would not be revived until people’s fears were addressed.

But Abi, a 20-year-old protester who only wanted to be identified by her first name, told the BBC she saw Ms Lam’s apology as “insincere”.

“I still maintain that she should stand down. If she’s asking for a second chance she should at least show that she’s deserving of it, by withdrawing the bill amendments completely. We have no trust in her,” she said.

China has backed Ms Lam and the extradition bill throughout the unrest.