Riyadh’s delegation in Geneva faces torrent of condemnation over the killing of journalist Jamal Khashoggi. 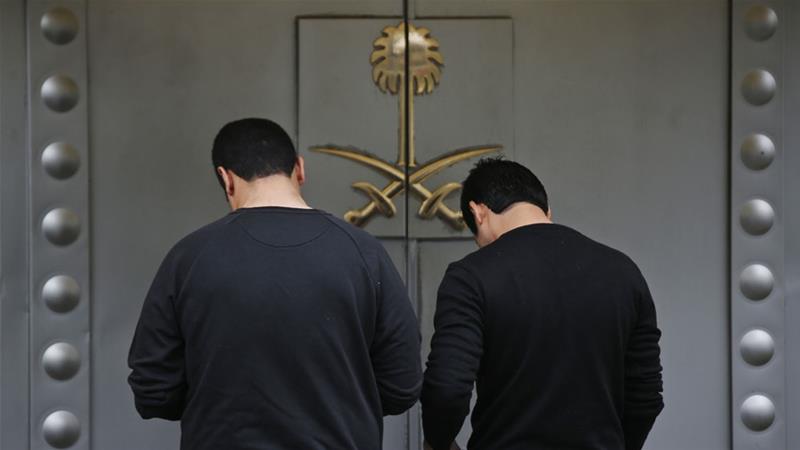 Delegations have been grilling Saudi Arabia on its human rights record at the UN in Geneva as it faces a torrent of international condemnation over the killing of journalist Jamal Khashoggi.

Member states have also been criticising abuses of the Saudi-Emirati coalition’s role in the war in Yemen in Monday’s so-called “Universal Periodic Review” – which all 193 UN countries must undergo every four years.

The US delegation told the UN human rights council that it condemns the “premeditated killing” of Khashoggi.

“A thorough, conclusive and transparent investigation carried out in accordance with due process with results made public is essential,” the delegation said.

Washington, which has long backed the Saudi-led coalition, called last week for an end to air raids in the country.

The Saudi delegation in Geneva is headed by Bandar al-Aiban, who serves as the head of the country’s Human Rights Commission.

The delegation is presenting a report over the country’s efforts to live up to its international human rights obligations, and will respond to questions and comments from countries around the world on its record.

Activists are urging countries not to hold back.

“UN member states must end their deafening silence on Saudi Arabia and do their duty of scrutinising the cruelty in the kingdom in order to prevent further outrageous human rights violations in the country and in Yemen,” Samah Hadid, Amnesty International’s Middle East director of campaigns, said in a statement.

“The Saudi government’s long-standing repression of critics, exemplified by the extrajudicial execution of journalist Jamal Khashoggi last month, has until recently been willfully ignored by UN member states.”

Addressing the council, the Saudi delegation restated the kingdom’s position that it is investigating Khashoggi’s case and will prosecute those responsible for the killing.

“The Kingdom of Saudi Arabia has already expressed its regret and pain for the death of Jamal Khashoggi,” Bandar Bin Mohammed al-Aiban, president of Saudi Arabia’s human rights commission said at the meeting.

“King [Salman bin] Abdulaziz has already instructed the prosecution to proceed with the investigation into this case according to the applicable laws and preparation to reaching all facts and bringing all the perpetrators to justice in order to bare the facts to the public.”

A number of countries have already submitted lists of detailed questions for the review, including questions from the UK, Austria and Switzerland on the Khashoggi case.

“Given the recent violent death of journalist Jamal Khashoggi, can Saudi Arabia elaborate on their claim that the laws of Saudi Arabia guarantee freedom of opinion and expression?” the UK asked.

Al Jazeera’s Paul Brennan reporting from Geneva said that the questioning that Saudi Arabia faces is stern, particularly because of the context of the recent murder Khashoggi.

“You can see that [the UK’s question] very elegantly phrased, but there’s no mistaking the bite behind it,” Brennan said.

“In some ways, it’s been predictably partisan of the tone of some of the questions. Uzbekistan and Algeria, for example, patted Saudi Arabia on the back for the progress that they said Saudi Arabia had made, for example, under the crown prince’s vision 2030 which they say upholds human rights,” Brennan said.

Explaining in their national report how the country upholds human right, Saudi Arabia mentioned its protection against abuse act, a child protection act, the ability that women now have the right to drive and various royal orders such as giving women more involved in government.

However, other reports submitted by UN committees and various NGOs paint a different picture, Brennan said.

Their reports highlight persistent discriminatory laws, a big increase in the number of executions between 2013-2015, the fact that there is no law that protects the rights to free assembly and continuing concerns about the lack of female involvement in governing process.

The reports point out that minors under the age of 18 who are found guilty of crimes could be stoned, or amputated and are even sentenced to death for non-violent crimes.

Khashoggi’s murder has saved a lot of lives in Saudi Arabia, since just a couple of weeks before his death, the Saudi government was planning to behead a lot of Saudi activists, Almoayyad said.

“So what is happening now is affecting the scene inside of Saudi Arabia where the government is a bit weaker and less vicious towards activists inside and outside.”

In Stinging Rebuke, China Tells U.S. Diplomat That Its Rise Can’t Be Stopped

Sigh of relief in Taiwan after China's parliamentarians start meeting