HONG KONG — Ever since Singapore separated from Malaysia and declared independence in 1965, the two neighbors have argued over who has stronger claims to aspects of their shared heritage.

The rivalry extends to street food, and the latest sticking point is a plan by Singapore to ask Unesco to recognize the city state’s street vendors, or hawkers, as part of the world’s “intangible cultural heritage.”

Singapore's going all out to get its UNESCO bid for local hawker culture, with a new website and traveling exhibition https://t.co/cH0pPmTdit pic.twitter.com/fEfwvM8e9e

The plan has been gaining steam since Prime Minister Lee Hsien Loong of Singapore announced it in August. The country’s national museum is hosting a related exhibition this month, and as of Monday, a government-organized petition to support the Unesco bid had nearly 38,000 signatures.

But some foodies, chefs and social media users in Malaysia have countered with withering criticism — suggesting, for example, that Singapore’s hawker stalls are too sanitized to truly compete with their grittier, allegedly tastier Malaysian counterparts.

Street food “has always been one of the few areas that Malaysians can confidently say they do better than their richer, cleaner and more efficient neighbor,” said Foong Li Mei, a co-author of “The Food That Makes Us,” a collection of Malaysian recipes and stories about the country’s culture.

“This could be why Singapore’s petition for Unesco recognition of its hawker culture offends some Malaysians — it sounds as if Singapore is saying that their hawker food is the original, and best,” she added.

The criticism has prompted some in Singapore to double down.

“Perhaps this discussion can be carried out properly after a hawker stall in Malaysia achieves a Michelin star (*cough* we already have two of ’em *cough*) — then we’ll be on equal footing,” the news site Coconuts Singapore said in an unsigned commentary.

(That was a reference to two Singaporean hawker stalls, Hill Street Tai Hwa Pork Noodle and Liao Fan Hong Kong Soya Sauce Chicken Rice and Noodle, whose fare is among the cheapest Michelin-starred food anywhere in the world.)

Singapore says it plans to submit its Unesco bid in March, and Mr. Lee, the prime minister, said in August that inscribing the city-state’s hawker food in the United Nations organization’s intangible heritage register would “help to safeguard and promote this unique culture for future generations.”

“I hope everyone will strongly support this nomination, so that our hawker culture can stand proudly on the world stage,” Mr. Lee said.

The three entities driving the nomination — the National Heritage Board, the National Environment Agency and the Federation of Merchants’ Associations, Singapore — said in a joint statement that the bid was “not intended to establish the origins or ownership” of cultural practices. 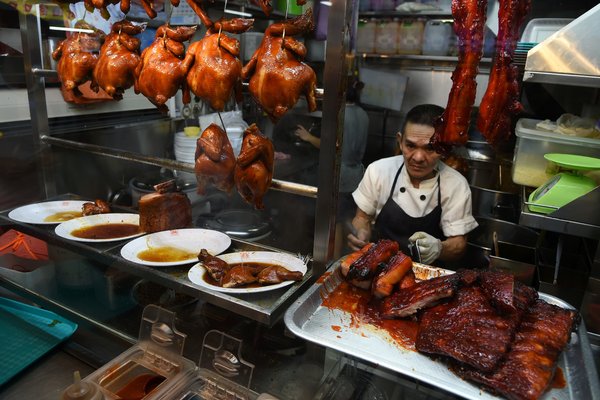 “Different countries will have their own take on what hawker culture means to them,” the statement said. It added that hawker culture reflected Singapore’s multicultural heritage and illustrated how the city-state’s early residents “toiled to etch a livelihood for themselves and their families.”

If the bid succeeds, it would become the latest culinary culture inscribed on Unesco’s intangible heritage registry, which was created in 2003.

Belgium’s beer culture is on the list, for example, along with France’s “gastronomic meal” — meaning at least four successive courses, bracketed by aperitif and dessert liqueurs.

Seven countries — Croatia, Cyprus, Greece, Italy, Morocco, Portugal and Spain — were also recognized by Unesco as the home of the Mediterranean diet. And both South and North Korea produce Unesco-certified kimchi.

Could kimchi offer a model for a dual bid that would include the chicken rice, nasi lemak and curry laksa served in both Singapore and Malaysia?

Samantha Khor, a senior writer at Says, a Malaysian news and lifestyle site, said that she and her colleagues doubted it.

“We’re very proud and protective of our hawker culture, I think,” she said. “Singapore’s hawker food is just not at our standard,” especially, she added, in the Malaysian states of Penang and Sarawak and the cities of Ipoh and Petaling Jaya.

Darren Chin, the proprietor and chef de cuisine at DC Restaurant in Kuala Lumpur, the Malaysian capital, said it was important to draw a distinction between Singapore’s food and culture.

Singapore’s hawker food is not especially unique because much of it originated in Malaysia, he said. But because young Singaporeans have not embraced hawker culture as a vocation to the same extent as their parents, the nomination could be a much-needed way for the government to raise the cuisine’s profile.

“Singaporean hawker culture is under siege,” he added, in part because it is still seen by the city-state’s hierarchical society as low-status work.

Ms. Foong, for her part, said that if Singapore’s Unesco campaign was primarily focused on raising awareness of hawker culture as a way of saving it — not on claiming ownership of the tradition — then she was on board.

“Hawker culture is an important and unique heritage, no matter where it is, and should be kept alive,” she said.