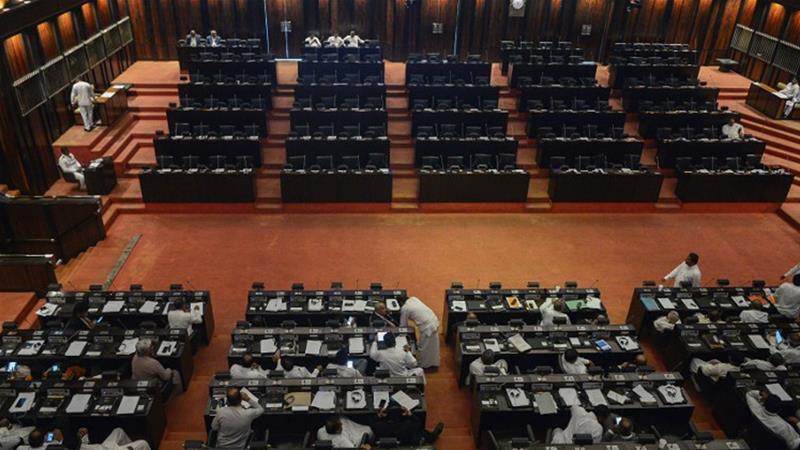 Opponents of the disputed Sri Lankan Prime Minister Mahinda Rajapaksa have won control of a crucial committee in parliament, in a serious setback to his government.

Legislators on Friday voted to hand control of the committee that sets the parliamentary agenda to the country’s deposed prime minister, Ranil Wickremesinghe, as Rajapaksa’s supporters staged a walkout.

Sri Lanka has been in political crisis since October 26, when President Maithripala Sirisena abruptly fired Wickremesinghe as prime minister and appointed Rajapaksa, a controversial former president.

The move was widely denounced as unconstitutional and both men have claimed to be the legitimate officeholder.

Wickremesinghe argues that he still commands majority support within parliament and, despite being fired, he continues to occupy his official residence.

Rajapaksa has lost two no-confidence votes in the assembly but has refused to stand down.

Last week, pandemonium broke out in the assembly when Rajapaksa’s supporters threw books, chairs and chilli paste at rivals in an attempt to disrupt the second no-confidence motion.

These moves were suspended by Sri Lanka’s supreme court, pending an investigation.

The parliament reconvened last week but degenerated into a brawl.

The parliament speaker Karu Jayasuriya said on November 15 that he would recognise neither Rajapaksa nor Wickremesinghe as prime minister.

The two rivals later met the president for talks on ending the weeks-long crisis but failed to reach a breakthrough.

The ongoing power struggle has led to a downgrade of Sri Lanka’s credit rating.

The authorities announced on Thursday that they will halt any sovereign bond issues as international borrowing costs had shot up, following the credit downgrade.

Legislators on both sides say that with the administration at a standstill, key sectors such as tourism in the Indian Ocean island are suffering badly.