HUALIEN, Taiwan — Two days after Taiwan’s deadliest rail disaster in decades, investigators were working on Sunday to determine why a truck had slipped downhill from a construction site into the path of an express train, resulting in the collision and derailment that killed dozens of people.

The operator of the crane truck, Lee Yi-hsiang, was ordered detained on Sunday by a judge, who reversed an earlier decision to grant him bail. Mr. Lee, who has not been charged with a crime, told reporters he had caused the crash and said he would take full responsibility for it.

“I hereby express my deep regret and my sincerest apologies,” Mr. Lee said, his voice choking as he bowed in apology.

But investigators were still trying to determine whether Mr. Lee had neglected to use the emergency brake, or if the truck had malfunctioned in some way. Mr. Lee told reporters on Saturday that he had engaged the brake.

Other aspects of the disaster were also being investigated. Officials said they were trying to determine exactly when the driver of the train applied the brake before the collision.

Officials said on Sunday that 50 people had been killed in the crash of the eight-car Taroko Express, which derailed and slammed into a tunnel wall after hitting the truck on Friday. The train was packed, carrying 498 people on the first day of a long holiday weekend. 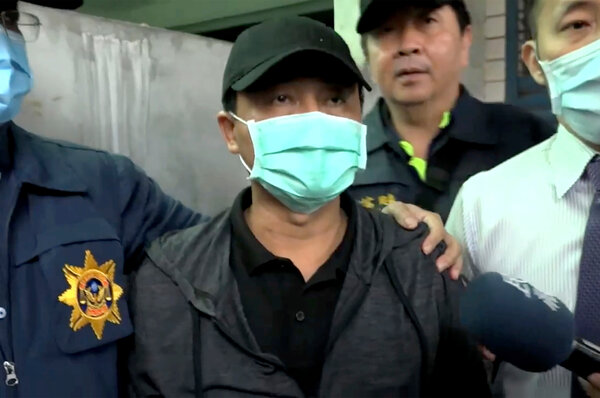 The authorities had previously put the death toll at 51. Identifying victims has been a slow and difficult process, and emergency personnel were still trying on Sunday to extricate wreckage from the tunnel and recover the remains of victims. Thirty-seven survivors of the crash were still hospitalized on Sunday, officials said.

Some survivors and relatives of the dead have shown more grief than anger. Taiwan’s last serious train crash, in 2018, was found to have been caused by driver’s negligence, but initial impressions were that the collision on Friday was something more like a freak accident.

Some family members said they did not want to assign responsibility for the disaster before the government had finished its investigation, which the authorities said would take about two months.

“I don’t want to blame anyone,” Wu Ming-yu, 68, said on Sunday, as she sat with family members under a tent at a funeral home in Hualien, a city south of the crash site on Taiwan’s east coast. They were waiting for a mortuary makeup artist to finish work on the body of Ms. Wu’s daughter, Huang Chiao-ling, a 35-year-old nurse who had been on her way to see her family.

Still, Ms. Wu said she was concerned that the construction site may have fallen short of safety standards. “You have to ensure the safety of the construction, because if you don’t you will end up hurting other people,” said Ms. Wu.

The construction project had been commissioned by Taiwan’s transportation ministry to improve the safety of the slope near the crash site, which occurred on a steep mountainside on the Pacific coast. It was part of a larger, six-year plan to enhance railway safety in Taiwan. Mr. Lee, the operator of the crane truck, was also the project’s site manager.

“It’s ironic and very unfortunate,” said Yusin Lee, a professor of civil engineering and director of the Center for Railway Studies at National Cheng Kung University in the southern city of Tainan. “It’s a reminder that even when we have safety-targeted construction projects, we still have to keep safety in mind.”

At a news conference on Sunday, officials said that Lee Yi-hsiang may have concealed part of his background when he applied to be the project’s site manager.

Su Chih-wu, a quality control engineer on the site, said by telephone that workers had nearly finished the project, which was focused on reinforcing the structure of a train tunnel running parallel to the one where the crash occurred.

He also said that there should not have been workers at the site on Friday, since it was the first day of a long holiday weekend. It was not clear on Sunday whether Lee Yi-hsiang or anyone else had been at the site that day.

Another engineer on the project, Yang Chin-lang, rejected the idea that his team had failed to ensure an adequate level of safety. “I didn’t do anything wrong,” he said by telephone. Both Mr. Yang and Mr. Su said they had been interviewed by prosecutors on Saturday.

“I just followed the design blueprints and did my job,” Mr. Yang added.

The crash occurred near Qingshui Cliff, an area where mountains rise dramatically from the Pacific Ocean. Experts say the difficult terrain has long presented a challenge to transportation engineers, and many accidents have happened on the winding highway there over the years. But the rail and highway routes are an essential link between Taipei, the capital, and the east coast.

Feng Hui Sheng, deputy director of the Taiwan Railways Administration, said in an interview on Sunday that the agency had made continual safety improvements to its systems and equipment since the 2018 crash.

He said that those changes would continue and that the authorities would also seek to improve the network’s signal and alarm systems and upgrade track safety. But he also acknowledged that broader changes might happen slowly.

“When it comes to the innovation and reform of the system,” he added, “we are more conservative.”