BANGKOK (AFP) – A Thai police chief at the centre of a manhunt over accusations he tortured and suffocated a drug suspect to death surrendered on Thursday (Aug 26).

National Police confirmed during a late night press conference Thursday that Thitisan gave himself up and was arrested in Chon Buri province south east of the capital.

“We will show the public that we will not protect wrongdoers,” national police chief Suwat Jangyodsuk told reporters, adding that six other officers had also been arrested.

“Everyone will be treated the same under the legal system. The police organisation must exist with people’s trust.”

Thitisan, who had served as chief of a district police station in northern Nakhon Sawan province, and some of his colleagues are facing criminal charges after video footage of a death in custody went viral on social media.

The clip shows a group of men – allegedly including Thitisan – wrapping a plastic bag around the suspect’s head while questioning him on Aug 5.

The suspect loses consciousness and some officers try to resuscitate him, the footage shows.

“A prosecution fully independent of the Thai police is needed if there is any hope of justice,” Human Rights Watch Asia Director Brad Adams said.

“Successive Thai governments have a long history of failing to ensure accountability for even the most ghastly police abuses against people in custody.” 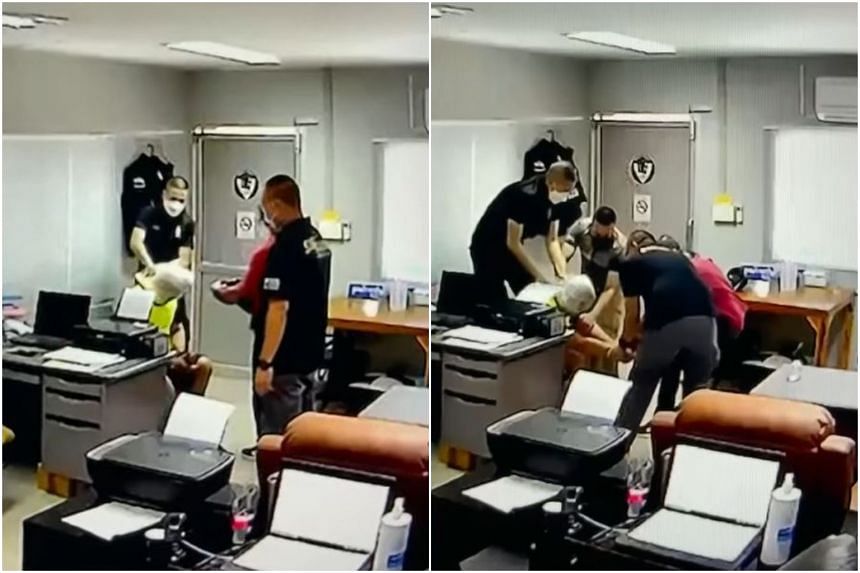 Police investigating the case earlier this week said the station chief is suspected of causing the man’s death while trying to extract a two million baht (S$80,000) payment.

In an unprecedented move during the press conference, Thitisan answered questions from the media over a mobile phone held up to a microphone and denied he had been trying to extort money.

“I did not aim to kill him… It was an accident,” Thitisan told the media by phone.

“This is not related to asking for money. I used a black plastic bag because I did not want him to see me but he tore the plastic bag so I had to tie his arms behind him.”

Thitisan said he was doing his job and trying to crack down on illegal drugs.

“I accept what I did was not right,” he said.

It’s unclear when formal charges will be laid.

Later Thitisan – wearing a green T-shirt and blue hat – was led out of the Crime Suppression Division and through a large media pack to a waiting police van.

Written in the stars: In chaos, Thai politicians turn to clairvoyants