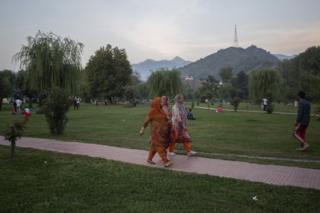 To escape the claustrophobic tension of living under siege, people in Srinagar have found ways to unwind.

Parks in the main city of Indian-administered Kashmir are seeing a surge of visitors. Anglers sit desultorily on the banks of the picturesque Dal Lake. Others drive around in their cars, meeting friends and relatives. Knots of people gather on empty streets and shoot the breeze.

Many of the stifling security barricades and coils of razor wire – potent symbols of the siege – have been removed. There are no blackouts or mass rationing. Small markets are opening for a few hours.

It seem as if life in the tense Muslim-dominated valley, home to some seven million people, is limping back to some kind of normalcy a month after Prime Minister Narendra Modi’s ruling BJP stripped the region of its autonomy, split it into two federally-run territories and imposed a lockdown.

But Asma Qurieshi, a government worker taking a stroll in a sprawling city park with her family, is not convinced.

“Don’t be fooled into believing everything is normal,” she tells me.

On Monday, India’s Supreme Court asked the government to restore normalcy in Kashmir “keeping in mind the national interest and internal security”.

The government insists the situation is returning to normal. It says hospitals and clinics are functioning, pharmacies are open, there’s ample stock of staples and medicines, cash machines are working, landline phones are being restored, schools are open and so on.

The government has even agreed to buy apple crops from farmers at a fair price. The local papers brim with adverts placed by the government promising people a rosy future of jobs and development.

Yet, the normalcy is deceptive – and surreal.

Landline phones are returning to life, but most people are still not able to connect. Some government offices are open, but almost no one turns up.

Fearing violence, parents are not sending their children to schools. Private schools are asking parents to collect video lessons and study material on flash drives.

And the region’s children, cooped up in homes and listening to TV news and parents, speak eloquently on the “injustice done by India” and play “stone-pelting” games in their gardens.

“Our lives are diminished. It feels like a siege of the mind,” a school teacher told me.

On the sullen, empty streets, shops and businesses – apart from pharmacies – are shuttered. Strangled by the communications blockade and opacity of official information, local newspapers have been reduced to skeletons of their former selves.

About 3,000 people – including political leaders, businesspeople and activists – are reported to have been detained. Security forces have been accused of carrying out beatings and torture in the wake of the government’s decision.

India has called the allegations “baseless and unsubstantiated”. 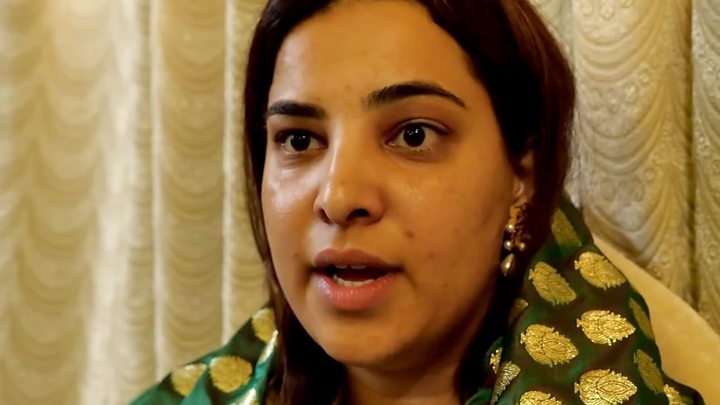 The extensive security blanket installed by authorities has ensured that there has been no large-scale violence. However, there have been conflicting accounts of the number of deaths due to action by security forces since the lockdown began, and frustrations continue to simmer beneath the surface.

“People are angry, humiliated and adrift. They have no leaders to take orders and cues from. And forget India. There’s no trust left in India,” a local police official, who preferred to remain unnamed, told me.

“This calm looks like a lull before the storm to me. But this time, we don’t even know from where the next resistance will arise.”

There is precedent for this: young Kashmiri men rose in revolt against the state in 2008, 2010 and 2016, leading to much violence and many deaths. During the agitation three years ago, following the killing of militant leader Burhan Wani, “public anger endorsed the new militancy”, says David Devadas, author of The Generation of Rage in Kashmir.

This marked a sea change, he says from 2010, when the agitation was against the killing of “innocents”. The 2016 agitations, says Mr Devadas, “represented a rejection of the state’s legitimacy”.

But this time, the only barely concealed agitation is emanating from Soura, a gritty neighbourhood in Srinagar, flanked by a lake and a multi-speciality hospital.

Days after the shutdown began, thousands of people took to its streets, and police opened fire and used tear gas to disperse them. A few weeks later, a procession in the area turned violent, as protestors threw stones at security forces, who retaliated with tear gas and pellets. At least two people were injured.

‘Living in a prison’

Soura has become an unlikely epicentre of resistance. Young men have dug trenches and all three main entrances to the neighbourhood have been blocked with stones, wires, wood, garbage vats, bricks, disused metal and wires. A famous Muslim shrine has become the gathering area for protestors. Drones fly over the warren of tiled homes and congested streets, keeping an eye on movements.

When night falls, angry young men, armed with thick bamboo sticks and fishing rods studded with nails, light little wood fires and “guard” it from raids by security forces. Posters of Burhan Wani are plastered on shuttered shops and homes alongside and pro-Pakistan and gun graffiti .

“We are living in a prison. But we won’t allow the security forces to enter the area,” a 19-year-old high school dropout told me.

The frustration may not be as obvious elsewhere. But, in my three days of travel across the restive regions of southern Kashmir, I heard no one support India’s stripping of the region’s special status openly. Most Kashmiris said they were hurt and humiliated by the move.

This is in stark contrast to the words of India’s national security advisor, Ajit Doval, who told journalists recently that after spending two weeks in Kashmir, he was “convinced that a majority of Kashmiris totally support the abrogation of Article 370 “.

Instead, I found most pervasive fears were about their land being taken away and “Muslim identity” swamped by outsiders – many believe the ruling Hindu nationalist BJP ultimately wants to change the demographic character of the Muslim-majority region.

India says the move is simply to help the region’s development.

“A tsunami of protest is coming. There is anger in our minds and burning lava in our hearts. We have been betrayed and hurt by India.,” said Ashiq Hussain, 42, a trader.

But as researchers have found, “Azadi” – or “freedom” in Hindi – could mean many things in Kashmir.

An exhaustive 2011 study of youth in six districts of Kashmir by Navnita Chadha Behera, a former visiting scholar at the Brookings Institution and the author of Demystifying Kashmir, found 54% of the respondents wanted “azadi”.

The majority of them sought “self-rule, self-determination, self-government and autonomy”. A negligible number of respondents (1%) wanted merger with Pakistan.

There’s little to suggest that attitudes have changed since then.

But it’s difficult to say what happens next.

Many in Delhi believe Kashmiris are tired of the violence and will eventually embrace Mr Modi’s promise of jobs and development. But this view has few takers in Kashmir.

So will this be the beginning of the end of the insurgency which has killed more than 40,000 people since 1990? Or will it spur a fresh spiral of long-drawn insurgency which will drag India into a bloody battle of attrition?

Large-scale upsurges in Kashmir have typically begun a few years after an inflection point – the 1963 uprising for instance, took place 10 years after the dismissal and arrest of Sheikh Abdullah, leader of the governing National Conference, after he took a pro-referendum stance and delayed formal accession to India. And the militancy of 1989 came two years after disputed state elections.

“The situation now has more incendiary potential than before,” Sumantra Bose, professor of international and comparative politics at the London School of Economics, told me.

Only time will tell whether this is true.