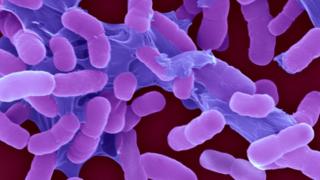 In a shared lab on the outskirts of the southern Indian city of Bangalore, a biotech start-up is fighting back against India’s looming drug-resistance crisis, writes Edd Gent.

“We want to design a novel class of antibiotics with very low propensity for resistance that will treat a wide variety of superbugs,” says Anand Anandkumar, the CEO of Bugworks, which is based at the government-funded Centre for Cellular and Molecular Platforms. “We hope to create a billion dollar drug company with just 18 people.”

That’s an ambitious goal, not least because the last novel class of antibiotics to be licensed was discovered in 1987.

But Bugworks has high-profile support after becoming the first company outside the US or Europe funded by the $455m (£343m) CARB-X accelerator, which supports start-ups combating antimicrobial-resistance (AMR).

India is in urgent need of new antibiotics. AMR is a global problem, but earlier this month a report from the Center for Disease Dynamics, Economics & Policy (CDDEP) in Delhi found India had some of the highest resistance rates in bacteria responsible for common infections.

“We probably have among the worst resistance in the world,” he says.

The problem prompted India’s government to release a National Action Plan on AMR in April, calling for strengthened monitoring of the spread of drug resistance, better education and training, improved infection control, better regulation of antibiotic use, and investment in research.

In unpublished tests in lab dishes and animals, Bugworks’ lead candidate has proved potent against several superbugs flagged by the World Health Organization as priorities and it hopes to start clinical trials within two years.

Other Indian companies are working on new antibiotics too. Start-ups like Hyderabad-based Vitas Pharma and Bangalore-based GanGagen have promising candidates close to clinical trials and pharmaceutical major Wockhardt announced in April the US Food and Drug Administration had fast-tracked its new superbug-focused antibiotic for clinical trials.

The biggest barriers remain financial, says Vitas Pharma CEO, Radha Rangarajan. Investors are put off by high failure rates of new antibiotic candidates as well as short courses and historically low prices that make them less lucrative than treatments for long-term diseases like diabetes or cancer.

“The ecosystem is starting to change, though, because there is an unmet need and there is recognition that highly resistant infections are now a global public health threat,” she adds.

The difficulty in securing investment makes it important for the public sector to take a leading role, says Anil Koul, director of the Institute of Microbial Technology (IMTECH) in the north Indian city of Chandigarh, particularly with diseases affecting India disproportionately, like drug-resistant tuberculosis.

“India accounts for about 25% of the global tuberculosis burden,” says Dr Koul. “Unless and until we in the public sector try and address this public heath challenge via parternships, the ambitious goal of ending tuberculosis will remain a distant dream.”

Solutions will only get to market with private sector support though, adds Dr Koul, a former research head at healthcare giant Johnson & Johnson, which is why his institute is forging collaborations with multinationals including a recently announced partnership on tuberculosis with his former employer.

“The aim is to have the first tuberculosis drug discovered and developed in India, but to be used by patients across the world.”

India is well-positioned to contribute to the global fight back against AMR, says Dr Koul. It has huge numbers of patients who can be enrolled in clinical trials and its large pharmaceutical industry – India is the largest exporter of generic drugs – means there is abundant, skilled manpower and a supportive ecosystem.

India’s well-developed biotechnology sector has been vital for Bugworks, says Dr Anandkumar, making it easy to hire talent and allowing it to outsource activities like synthesising molecules and carrying out studies so its team can focus entirely on drug discovery.

Developing new antibiotics is hard, though. High failure rates, the innate complexities of beating drug resistance and unattractive economics have seen most multinationals retreat from infectious diseases in recent years.

Dr Anandkumar thinks the failures were partly because big, process-driven pharmaceutical companies are not suited to the agile, multidisciplinary work required for early-stage drug discovery. They got burned after investing billions on robotic technology to systematically test thousands of candidates, he says, but it turns out drug discovery is as much art as science.

“It’s chaotic, it runs on nervous energy, which doesn’t lend itself to processes,” he adds. “Advanced discovery can only happen in small biotech firms.”

It’s early days though, says CDDEP’s Dr Laxminarayan. Until these companies complete human trials it’s hard to judge their products’ viability and, even then, new drugs are only one part of the puzzle for India. Without better infection control and regulation of antibiotic use “it’s like mopping the floor with the tap still running”, he says.