Home » Asia » The ‘precious’ mosque where peace was shattered 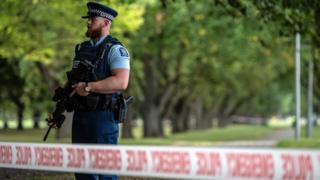 Nasir Uddin gazes through the trees in the park towards the exterior wall and golden roof of the Al Noor mosque across the road.

With a police perimeter still in place, it’s as near as he can get. He looks at the building with tear-filled eyes.

“Now we are very sad,” he says shakily as he stands in Christchurch’s Hagley Park.

A migrant from Bangladesh, Mr Uddin, 37, moved to this picturesque city on the east coast of New Zealand’s South Island more than five years ago. An Al Noor regular, he would have been at the mosque on Friday if he hadn’t had to work.

The peace of Christchurch’s largest mosque was shattered that day by a gunman who burst in and opened fire with semi-automatic weapons just after worshippers had gathered for congregational prayer.

The shocking act of violence here and at another mosque in the city that left 50 people dead has caused outrage across the world, not least because the perpetrator live-streamed his murderous assault on Al Noor on Facebook via a head-mounted camera.

The Al Noor mosque has always been “very precious to us”, says Anjum Rahman of the Islamic Women’s Council of New Zealand. “When it was built, it was the southernmost mosque in the world.”

Founded by the local Muslim community, Al Noor is notable for having brought together worshippers from highly diverse backgrounds across the Muslim world, among them refugees.

Some of the known victims include a tech entrepreneur who was also a futsal star, and an elderly Afghan man who had escaped the Soviet invasion in the 1980s. They had all found a home in New Zealand.

Victims from both shootings are believed to include people who had begun their lives in nations including Jordan, Egypt, Pakistan, Bangladesh, Indonesia, the United Arab Emirates, Afghanistan, Syria, Kuwait and India.

For Ms Rahman, whose family has been in New Zealand since 1972, the diversity of the nation’s mosques such as Al Noor shows how the local Muslim community had come “to welcome everyone”.

She says: “I think New Zealand is probably the best example in the world where have done that successfully. It didn’t happen by accident. It’s something that we worked on and our parents’ generation worked on.”

At Hagley Park, two joggers pause beneath a tree to observe a tiny collection of flowers and tributes. One becomes visibly emotional, her lip trembling as she is comforted by her companion. Seconds later, they are jogging again.

For Eleanor Morgan, 53, it’s a horrifying contrast to her usual experience of the Hagley Park area, a place that for her is the heart of Christchurch.

“It should have been their haven, their safe place,” she says. “We hope we find we can show some way to show our love.”

Another visitor, Jawakar Selvaraj, 25, was in the park about 15 minutes before the shooting. Originally from India, he says he has felt frightened ever since Friday’s events.

“I’m sure nothing will happen but there’s a tinge of fear for an immigrant,” he says.

On the other side of the park, hundreds of people visit a larger collection of flowers and tributes. Many messages have been left there.

“We breathe the same air. We walk the same land. We bleed the same blood.”

“This is your home. And you should have been safe here.”

“Our hearts are with you, your family, your friends & your community. We feel your pain. We cry your tears.”

“Hug your loved ones close.”

Another tribute is simply painted with the name “Sayyad”, a reference to Sayyad Milne, a 14-year-old boy who was at the Al Noor mosque and is believed to be among the dead.

Fridays at the Al Noor mosque were a time for people to come together, Mr Uddin says.

“Then we can meet our friends,” he says. “We can see our friends. Everything is fine here.”

After hearing of the attacks, he began frantically calling people, but no-one answered.

He knows at least two of his friends are dead, and is waiting for news on others.

“This thing that we feel is too painful.”