Home » Asia » This Urban Safari Comes With a Warning: Watch Out for Snakes

HONG KONG — The snake didn’t see the catcher coming, at least not in time to avoid being caught.

“This is the fourth-most-toxic land snake in the world, and the most toxic snake in Asia by far,” the catcher, William Sargent, told a group of hikers on a recent night in Hong Kong. He delivered the news calmly, in the way one explains that dinner is ready.

Which of us, he asked, wanted to touch it first?

Mr. Sargent, 44, runs Hong Kong Snakes Safari, an outfit that takes residents on night hikes through the territory’s wooded hinterlands. Some are more apprehensive than others as they learn firsthand about what he says is a chronically misunderstood reptile.

The hikes highlight the scale of biodiversity in Hong Kong, a financial hub of 7.5 million people that is better known for its high-rises than its sprawling protected areas. It’s also a way for city slickers with snake phobias to confront their fears in the wild.

Hong Kong is nearly the size of Los Angeles, but about 40 percent of its land area consists of parks that were created in the 1970s when the Chinese territory was still a British colony. Human-animal conflicts are inevitable because so much of the protected land lies within walking distance of dense urban areas.

Wild boars, in particular, often cause a stir when they wander into busy streets or subway stations. Last month, a family of boars made the local papers by sauntering through Hong Kong’s central business district and taking a swim in the fountain outside the Bank of China’s 72-story office tower.

Snakes generally keep a lower profile in Hong Kong, but because eight native species are capable of inflicting fatal bites, the health risks can be serious if they end up in close quarters with humans.

The Hong Kong Police Force said in a statement that whenever a snake endangers the public, it is “safely boxed and bagged” by approved catchers, then sent to live at Kadoorie Farm and Botanic Garden, a local nonprofit that also shelters rescued bats, birds, crocodiles, monkeys, pangolins and turtles. Most of the snakes are later released into the wild. 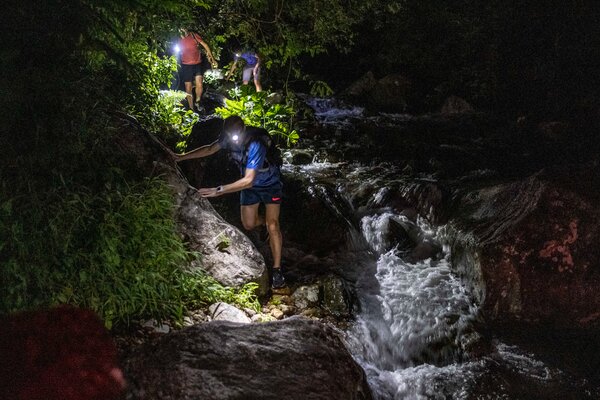 Mr. Sargent, who kept snakes as pets while growing up on one of Hong Kong’s outer islands, has been a police-approved expert since 2015. He said his snake-catching assignments had taken him to prisons, schools, supermarkets, an airport hangar and a construction site for a coronavirus ward, from which he extracted a 10-foot python.

Last month, he was summoned to a fishing village at 3 a.m. to remove a Chinese cobra — from beneath the bed of a 90-year-old woman. He said a group of the village’s elderly residents formed a kind of receiving line around him as he walked by, “yelling their five cents’ worth about this foreign snake catcher.”

“Even the police were laughing,” said Mr. Sargent, who is British-Swiss and works in event planning by day.

Separately, he runs the hiking business and an educational Facebook group about local snakes that has more than 10,000 members. It was set up partly to help correct viral misinformation, like the suggestion that snakebites are common in the city.

The World Health Organization estimates that about 81,000 to 138,000 people around the globe die each year from snakebites, mostly in developing countries, and that about three times as many suffer permanent disabilities.

Most of the world’s estimated 1.8 million to 2.7 million annual “envenomings,” or snake poisonings, occur in Asia, many in countries with weak health systems and sparse medical resources. The countries that lack the capacity to manufacture antivenom are the most at risk.

But in Hong Kong, which has a first-rate medical system, no one has been killed by a venomous snake since at least 2005, according to a spokesman for the city’s Hospital Authority. In 2018, the last year for which data is available, the authorities recorded just 73 snakebites, making the chances of being bitten about one in 100,000.

“It’s not mystical,” said Mr. Sargent during the night hike. “It’s very clear-cut what the risk is. But there’s such a huge gap of misconception.”

I was one of several hikers who met Mr. Sargent at a village near Hong Kong’s border with mainland China on a sweltering weekday evening. Before we entered an adjacent country park, he explained that the best way to avoid a snakebite was simply to watch our feet and walk with a high-quality headlamp.

Check. And check. As we set out on a concrete path, our carefully monitored footsteps were bathed in a reassuringly bright LED halo.

But the ambient light seemed to fade with every step, and sections of the path were starting to look worryingly overgrown — at least to my snake-fearing eyes.

“Look everywhere you can look,” said James Kwok, a wildlife enthusiast who had tagged along for the safari and offered snake-spotting advice.

The group forded a thigh-high stream and traversed slippery rocks in the dark. A few hikers lost their footing and tumbled into the water.

Mr. Sargent spotted our first quarry — a mountain water snake — and plucked it off a stream-side rock with his bare hands.

As he showed us the snake, it nibbled at his hand, drawing a trickle of blood. He shrugged: It was nonvenomous, and therefore harmless.

But it didn’t look happy in Mr. Sargent’s confident grip.

That seemed like more than enough drama for the night. But a few minutes later, a longer, thicker, black-and-white-striped snake slithered into the light of the group’s headlamps.

“Quick, quick, quick!” Mr. Sargent yelled in a stage whisper, as the group scrambled into formation behind him, headlamp beams bouncing across the subtropical foliage like spotlights at a rock concert.

In a fluid motion, he sprinted ahead, slipped his hand into a puncture-resistant glove and scooped up the snake.

As it writhed around in the humid air, he said it was a many-banded krait, a nocturnal species whose highly toxic venom targets the nervous system. We all tittered with anxiety.

But Mr. Sargent, who still looked serenely calm, reassuringly said that in three decades of handling wild kraits, he had yet to see one strike. The animal’s primary instinct was to flee, not bite.

So we gathered around to touch the krait’s belly — which was surprisingly smooth and delicate, like a baby’s cheeks — and to marvel at how beautiful its scales looked up close.

“It’s not what you expect,” said Ruth Stather, a fellow hiker, who works in marketing.

The krait was not exactly pleased, but it seemed willing to tolerate the curious humans for a few minutes. As we stood there touching it in the silent darkness, I felt my snake phobia easing.

I worried that he was tempting fate. But, sure enough, when he released the snake into the undergrowth, it slithered away.

Coronavirus: South Korea to tighten border checks for US entries

Haze in S'pore: PSI enters unhealthy range across island, with the west recording 124 at 8am