Noisy children skateboarding on the streets. Couples arguing in their homes. People gathered on the sidewalk, gossiping for long hours. Some people would describe these activities as noise pollution. A new website in Japan has put perpetrators on a map, spurring debate about targeting those who disturb the peace.

The website, DQN Today, describes itself as a crowdsourced guide to help house hunters avoid neighborhoods inhabited by “stupid parents who let their children play on roads and parking lots.” It has maps visualizing the dorozoku, or “road tribe,” a term that applies to people of all ages who block the way or wreak havoc in public.

Residents who find noise pollution unbearable have found an outlet in the website, which collects anonymous gripes about neighbors and pins every grievance on an interactive map, creating an elaborate record of the irritating sounds and sights of Japan.

Noise complaints have increased in the capital, Tokyo, with the police logging a 30 percent increase between March and April last year, when the government shut schools and advised residents to work remotely because of the coronavirus, causing some to become all too aware of homebound sounds they had paid little attention to before.

Outside, even though some play areas have been cordoned off during Japan’s state of emergency, most parks have remained open — and crowded.

The creator of the website initially responded to emailed questions on Wednesday about the site but declined to give his full name. He said that the map was a less-than-subtle hint for residents — they know who they are, even though they never are named — and for government officials, whom he hoped would pay attention. The creator, who describes himself as a freelance web developer in Yokohama, Japan, and goes by the Twitter handle @hotaniya, later stopped responding to emails.

The site started in 2016 and initially had a few hundred users. Since then, it has grown exponentially as it has stirred debate, especially over what experts say appears to be society’s growing intolerance for the sounds of children at play.

While many on social media have lauded the website for shedding light on the problem of noise, some parents find its approach troubling and fear a growing divide between families with children and neighbors who cannot stand them. Among the 6,000 wide-ranging complaints, which cover subjects like parking violations, excessive swearing or stray cats that scratch car tires, are many entries that single out areas frequented by unsupervised children. 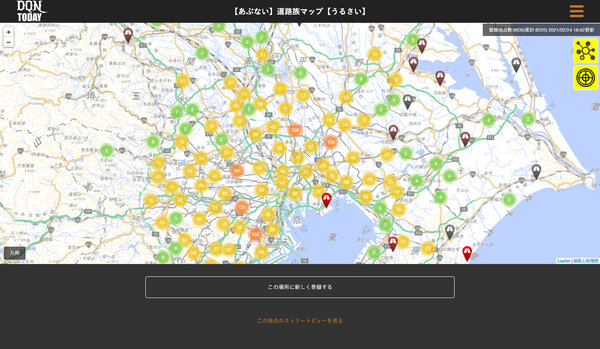 Saori Hiramoto, 35, an activist who successfully lobbied the Tokyo Metropolitan government to allow strollers in crowded trains in 2019, said that the map demonstrated a breakdown in communication and the fracturing of a society that was once interdependent.

“I really feel it’s so tough to raise kids,” she said, “People say parents should be responsible for child care, but it’s very difficult, especially for single parents. We’ve come to our limits.

“I think that the society or community should watch and raise kids as members in society,” she added.

Akihiko Watanabe, a professor in the Faculty of Education of Shiga University, near Kyoto, said in an interview on Wednesday that the map had the potential to harm children and teenagers by exposing places where they hang out, unsupervised. But some parents get defensive over complaints about their children, making it difficult for others to approach them with concerns, he said.

“In the past, parents apologized and discipline their kids,” he said. “But now parents get hostile against people who scold.”

At least 1,500 new users registered to use the map during between March and April last year, just as the Tokyo police logged the increase in noise complaints.

One complaint reads: The gatherings “are terribly loquacious and noisy. I glared for a long time but they didn’t stop. Children are also left unattended and make strange noises.”

Another says, “Three or four children gather and play loudly during holidays, and a high-pitched voice echoes in the neighborhood.”

“I forgot that this was a road,” another user wrote about a stretch of asphalt frequented by skateboarding preteenagers.

The dorozoku website is not the first digital map to draw controversy over what it details. Oshimaland logs “stigmatized properties” in Japan and around the world, where murders, suicides and fires have taken place. Recently, new users of the Dorozoku map have tried to log public nuisance complaints in Taiwan, Portugal, Germany and Britain, but postings are limited to Japan for legal reasons.

The mapping site does not permit comments directly targeting private residences or schools, but it does allow references to unattended children playing on nearby roads, noting that it was ultimately the responsibility of parents and schools to supervise children at all times.

Over the years, residents in various parts of the country have campaigned against the construction of nursery schools, even as parents have called for more affordable day-care options. Kobe residents sued a nursery school in 2016 over playground cacophony, but the case was dismissed in 2017.

Experts see a growing intolerance toward children at play as some in the country’s aging population become less familiar with the sounds of small children. Over the years, residents in various districts have campaigned against the construction of nursery schools, even as parents have called for more affordable day care options and economists are worried that people in Japan, which has the oldest population, isn’t having enough babies.

Public parks are plastered with signs prohibiting all sorts of activities in response to nuisance complaints from residents. The Nishi-Ikebukuro Park in Toshima, Tokyo, has drawn attention for its bans on 45 different activities, such as skateboarding, jumping rope and soccer. A local official said the bans stemmed from a decade’s worth of complaints.

Ko Fujii, the founder and chief executive of the public affairs agency Makaira and a visiting professor at Tama University’s Center for Rule-making Strategies in Tokyo, noted incidents in recent years where disgruntled commuters harassed mothers who carried babies on public transportation.

The father of two young children, Mr. Fujii said that he had plastered a sticker bearing the slogan “We love babies, it’s OK to cry,” in order to show support to fellow parents.

“I think some people are purely just so frustrated with city life that they can become this insidious,” he said.

Japan has seen no shortage of noise disputes between neighbors. A 38-year-old construction worker was stabbed to death at his parents’ apartment in Tokyo in May by a 60-year-old resident of the building, who told the police he “could not stand the loud footsteps and voices.”

On Wednesday, a couple in Kyoto won a case against six neighbors, whom they had sued for harassment over noise disputes that concern their children. When reached by telephone, one of the plaintiffs, Shu Murayama, said that he considered the map a helpful resource for others.

“You can avoid troubles with this,” he said, adding that he had noticed complaints pinned in his own neighborhood.