HONG KONG — The orders seemed innocuous, even obvious: Primary school students in Hong Kong should read picture books about Chinese traditions and learn about famous sites such as the Forbidden City in Beijing or the Great Wall.

But the goal was only partially to nurture an interest in the past. The central aim of the new curriculum guidelines, unveiled by the Hong Kong government this month, was much more ambitious: to use those historical stories to instill in the city’s youngest residents a deep-rooted affinity for mainland China — and, with it, an unwavering loyalty to its leaders and their strong-arm tactics.

Students, the guidelines said, should develop “a sense of belonging to the country, an affection for the Chinese people, a sense of national identity, as well as an awareness of and a sense of responsibility for safeguarding national security.”

The Chinese government, in its efforts to quash dissent, has imposed a strict set of restrictions on Hong Kong, including new rules this week to bar any candidates deemed disloyal to the Community Party from elected office.

But the strategy goes well beyond repression. The Hong Kong government has also launched a vast campaign to indoctrinate the next generation — and it is using history as a potentially powerful tool to inculcate obedience and patriotism.

When mass antigovernment protests swept the city in 2019, pro-Beijing officials blamed the education system for promoting liberal values and radicalizing Hong Kong. Determined to avoid a repeat, they are now aggressively promoting a specific narrative, designed to reinforce the Chinese Communist Party’s tightening rule over the former British colony.

To the authorities, that narrative is a necessary corrective to ensure stability and unity. To the critics, it is social engineering, a misleading and dystopian campaign to shape young minds.

In some cases, the government has moved to literally rewrite history. It is backing the creation of a 66-volume set of “Hong Kong Chronicles,” which is projected to cost $100 million and promises a “comprehensive, systematic and objective” record of the city’s last 7,000 years. In official yearbooks that summarize the government’s achievements, references to past cooperation with Western countries — which had been reprinted without change for decades — have disappeared. 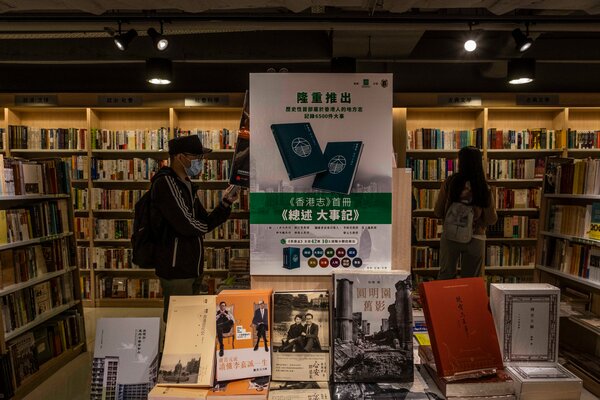 Along with the national security lessons for schools, the government also is overhauling and halving the instruction time for a subject called liberal studies. Pro-Beijing politicians say those lessons, which are dedicated to nurturing critical thinking, have poisoned young people against the government. Officials say the new curriculum should teach facts about Hong Kong and China’s recent development but should not ask students to analyze them.

The government’s education bureau has denied that its new national security curriculum is brainwashing, calling such labels “malicious” in a statement on Monday.

Battles over history are ubiquitous, in democracies and authoritarian states, among scholars, governments and the general public. Historians are the first to acknowledge that there is no such thing as an objective record. Hong Kong’s antigovernment activists have also selectively deployed historical events to rally support.

Still, the Chinese government — which regained control of the territory from Britain in 1997 — is uniquely adept at, and fixated on, controlling the historical narrative. In mainland China, major events, including the government’s 1989 massacre of Tiananmen Square protesters, have been largely erased from public memory by censorship and official directives that insist on “patriotic education.”

Critics fear that model is being imported to Hong Kong. The city’s chief executive, Carrie Lam, said recently that the “Hong Kong Chronicles” project would help residents, “especially the younger generation, better understand the inseparable relationship between Hong Kong and the country.”

Chan Hei Tung, a teacher of liberal studies, said the government’s flattened narrative would only distance students from the city and the country that the authorities want them to love. He had previously used stories about Hong Kong’s past to encourage students to analyze present-day issues. Under the government’s new initiative, he said, “what they have to do is just memorize and follow and respect the authorities.”

“The interaction between their generation and their city and the whole society will be gone,” said Mr. Chan, who also serves on the executive committee of a pro-democracy teachers’ union. “They don’t have a role to commit in changing the history.”

As soon as the first, nearly 800-page volume of the “Hong Kong Chronicles” project was published in December, pro-democracy advocates attacked it for describing the 2014 Occupy Central movement as “illegal.” The chronicle made no mention of a march of at least 350,000 people on July 1, 2014, that had helped catalyze the movement. But it did mention a counterprotest that the police said drew about 100,000 people.

Others criticized the book for characterizing antigovernment protesters who clashed violently with the police in 2016 as “rioters,” noting that it called pro-Communist forces who had done the same in 1967 “protesting workers.” The book also did not mention that the pro-Communist protesters had planted bombs that killed, among others, an 8-year-old girl and her toddler brother.

The nonprofit organization behind the chronicles is led by Tung Chee-hwa, a former chief executive of Hong Kong. The project names as “honorary patrons” Mrs. Lam, the current chief executive, and Luo Huining, the central government’s top official in Hong Kong.

Lau Chi-pang, a history professor at Lingnan University in Hong Kong and a director of the project, said he hoped the chronicles could be a “very handy source” for schoolteachers.

Professor Lau said the authors had tried only to list events, not pass judgment on them. But he acknowledged that he, like all historians, brought a political perspective to his work.

“I have always been seen as a pro-government scholar, and I don’t deny that,” he said.

Professor Lau is also the chairman of the government committee that is redesigning the liberal studies curriculum, to cut instruction time in half and make the subject pass-fail. He said expectations for the subject were too high.

“You don’t expect at this high-school level, or even college level, that social issues or political issues can easily be taught with reasonable depth,” he said.

Students should focus on learning the facts, not necessarily assessing their context, he said: “They need to know that, after 1997, Hong Kong is part of China. They only need to know about that. We don’t want them to analyze anything out of that.”

While the government’s focus on modern history has drawn the most attention, its revisions stretch back to ancient times.

In the government’s annual yearbook, one chapter is dedicated to history, starting with archaeological relics from about 6,000 years ago.

Between 1997 and 2016, the yearbook consistently declared that those prehistoric cultures had evolved “locally, independent of any major outside influences.” But in 2017, that phrasing disappeared. Instead, the record said, Hong Kong’s culture had “developed out of influence from central China.”

Longstanding mentions of “liberal British rule” over Hong Kong also vanished in subsequent years. Hong Kong’s participation in “the Allied cause” during World War II became “the anti-Japanese cause,” echoing a rallying cry the Communist Party has used to stoke nationalist fervor.

Bao Pu, who owns a publishing house focused on modern Chinese history, said re-evaluating the story of British influence on Hong Kong was justified. During the colonial period, Chinese residents were subjected to segregation and racism, which the yearbooks barely mentioned.

But it is also wrong to try to erase the legacy of that period entirely, he said: “They have ambitions to eradicate that Hong Kong identity, which is different from Chinese identity.”

In response to the government’s efforts, activists and other amateur historians have tried to preserve their own stories. Facebook pages and pop-up exhibitions led by pro-democracy supporters have proliferated.

“This kind of misuse of history is very common, in posters and propaganda by both the regime and also activists,” she said, adding, “We really have very little control over how people will read into our work.”

Still, some worry that critics’ alternate narratives will be stamped out — along with, eventually, the curiosity and critical thinking that fueled them.

Amy Lam, a stay-at-home mother who participated in the 2019 protests, said her friends with younger children worried that the new curriculum guidelines would ensure that the children never learned to consider opposing viewpoints.

Ms. Lam felt more confident that her own daughter, 15, had already begun developing the necessary skills. Even so, she was eager for her to graduate from high school and enroll at a university abroad.

“She will be out of the whole system very soon. I think we just have to stick in there, and hopefully things don’t change so much,” she said. “But for the younger ones, I feel sorry for them, especially those just getting into primary school and their parents. It’s going to be tough.”

No end in sight for fraying Sino-Indian ties