US president says it ‘could very well be’ that the Saudi crown prince ‘had knowledge’ of the murder of Jamal Khashoggi. 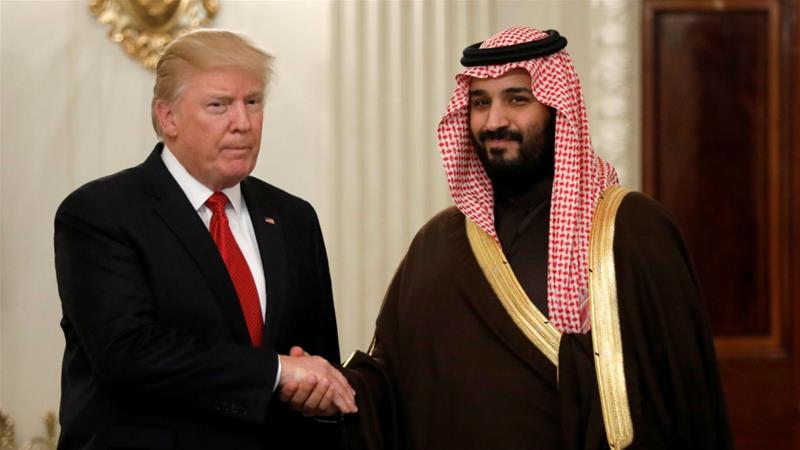 President Donald Trump said on Tuesday that the United States intends to remain a “steadfast partner” of Saudi Arabia even though “it could very well be” that Saudi Crown Prince Mohammed bin Salman had knowledge of the killing of journalist Jamal Khashoggi.

“We may never know all of the facts surrounding the murder of Mr Jamal Khashoggi. In any case, our relationship is with the Kingdom of Saudi Arabia,” Trump said in a statement issued by the White House.

Defying pressure from US lawmakers to impose tougher sanctions on Saudi Arabia, the president indicated he had no intention of cancelling military contracts with the kingdom.

“If we foolishly cancel these contracts, Russia and China would be the enormous beneficiaries,” the president said.

Khashoggi, a contributing columnist for the Washington Post, was killed at the Saudi consulate in Istanbul on October 2 when he went there to pick up documents needed for his planned marriage.

A critic of the Saudi government, Khashoggi had resisted pressure from Riyadh for him to return home.

Saudi Arabia initially rejected its nationals were behind the killing, but as Turkish authorities continued to leak evidence of high-level involvement, Riyadh eventually admitted its agents carried out the killing with a series of contradictory explanations.

Saudi Arabia’s deputy public prosecutor has said he was seeking the death penalty for five suspects charged in Khashoggi’s killing. Al-Shaalan told reporters the Saudi crown prince knew nothing of the operation, in which Khashoggi’s body was dismembered and removed from the consulate.

On Thursday, a bipartisan group of US senators introduced legislation seeking to punish Saudi Arabia over Khashoggi’s killing and for its role in the devastating war in Yemen.

The move came not longer after the US imposed economic sanctions on 17 Saudis allegedly involved in the journalist’s murder. Many senators expressed disappointment that those sanctions did not include the crown prince himself, and called on the US to take tougher action.

In Tuesday’s statement, Trump said he was aware that some members of Congress “would like to go in a different direction” and they are “free to do so”.

“I will consider whatever ideas are presented to me, but only if they are consistent with the absolute security and safety of America,” he said.

“They (Saudi Arabia) have been a great ally in our very important fight against Iran. The United States intends to remain a steadfast partner of Saudi Arabia to ensure the interests of our country, Israel and all other partners in the region.”

Secretary of State Mike Pompeo echoed Trump’s statement, saying, “It is the president’s obligation and the State Department’s duty to ensure we adopt policies that further America’s national security.”

Earlier on Tuesday, a State Department official told ABC News that it was “blindingly obvious” that the crown prince order Khashoggi’s killing. Pompeo said he could not comment on matters of intelligence.

Al Jazeera’s Kimberly Halkett, reporting from outside the White House, said Trump comments are going to enrage both Democrats and Republicans, as well as members of the intelligence community.

“This is not going to play well for the president,” Halkett said.

She added that the president will likely be pressured to explain how he reached the conclusion that the facts may never been known, considering his was briefed by the CIA director on the agency’s findings.

Randa Slim, an analyst with the Middle East Institute, said she believes Congress may try to take action on weapons sales to Saudi Arabia and on its role in Yemen.

“I think it will be tougher and tougher going forward for the administration to be able to spend and rationalise a future cooperation on a number of spheres between the United States and Saudi Arabia,” Slim said.

“The United States is the supreme power in the Middle East. It is Saudi Arabia’s closest ally, and usually the Saudis will do well just with America, but the fact that the Germans have already boycotted Saudi Arabia, in terms of military hardware, I think probably more Europeans could do the same, although the French hesitated in the beginning, we will see what they will do next .. I think where America goes now, you would expect a lot of the others to be intimidated in the process, but that does not end where this thing is going”

“Yes, congress will still have a role to play, I think what the the Secretary of State tried to do was basically turn the page, he didn’t even want to answer questions about this issue, he just wanted to turn the page, he basically didn’t even talk about what the state department talked about all this time, which is the investigation is open, we will find out more about what happened, they are not even exploring that.