Home » Asia » U.S.-China Clash at Asian Summit Was Over More Than Words

BEIJING — The United States wanted to emphasize free trade at the end of a meeting with Asia-Pacific leaders. China objected. So Chinese officials barged uninvited into the office of a senior Asian official, demanding changes in the official communiqué.

China’s decision to burst into the office of the host country’s foreign minister marked a striking break with decorum at a meeting that is normally used to promote cooperation among countries that ring the Pacific Ocean.

The dispute meant that the Asia-Pacific Economic Cooperation, or APEC, forum held in Papua New Guinea and attended by Vice President Mike Pence and China’s leader, Xi Jinping, failed to issue a joint document for the first time since 1989.

More important, it signaled a new phase in relations between the two powers, with China showing its willingness to cast diplomacy aside in favor of a more aggressive posture as it challenges the United States’ dominance in the region, analysts said.

China’s more assertive approach comes as Mr. Xi considers accepting an invitation from the North Korean leader, Kim Jong-un, to visit the North. Such a trip could complicate stalled nuclear talks between the United States and North Korea.

The way the two big powers vied openly in Papua New Guinea with money and military assets for advantage was reminiscent of how Washington and Moscow behaved during the Cold War, analysts said.

“China doesn’t care if it looks like a boor. If you are a tough guy, you don’t care what others think,” said Hugh White, a former military strategist for the Australian government and author of “The China Choice.”

Such behavior was only surprising because it had been more than 30 years since the world had witnessed such edginess, Mr. White said. In that era, tit-for-tat diplomacy was a leitmotif between the pre-Gorbachev leaders of the Soviet Union and Ronald Reagan. Such public snarling between Washington and Beijing is likely to become more common, he said.

The latest tensions — part of a heated trade war — boiled over Saturday when four Chinese officials barged into the office of the foreign minister of Papua New Guinea, Rimbink Pato, according to a diplomat in the region and an American official involved in the drafting of the communiqué.

Security officials were summoned and the Chinese left voluntarily. The police were then posted at the office to prevent further disruptions.

The American official said the Chinese had taken issue with two portions of the draft communiqué that Washington supported and other members embraced.

One paragraph said the APEC member economies agreed to fight against unfair trade practices. Another paragraph said that members of the group would work together to improve the “negotiating, monitoring and dispute settlement functions” of the World Trade Organization.

Negotiators had been working on the final communiqué for days, diplomats said, and the disputed material was not suddenly inserted into the text.

The diplomat from the region said the Chinese move was puzzling.

Eswar Prasad, an economics professor at Cornell University, said: “China’s strident reaction to such innocuous language signals its leaders’ concern about being isolated by the U.S. and other countries who may still create a unified front to take on unfair Chinese trading and economic practices.” 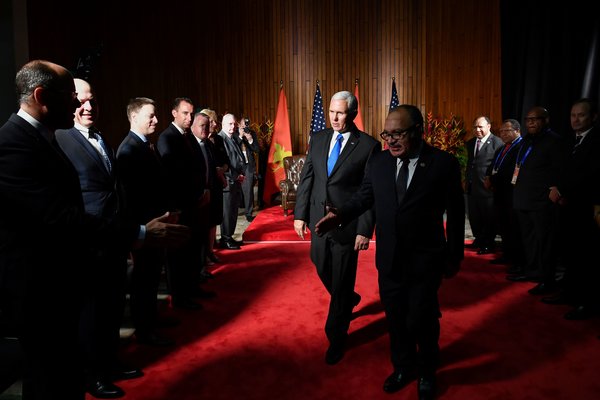 China seemed to dismiss the account that its officials burst into the foreign minister’s office as “rumor.” But Geng Shuang, a spokesman for China’s Ministry of Foreign Affairs, hinted at the source of Chinese anger by saying that most APEC members opposed the practice of “economic bullying,” an apparent reference to the United States’ actions.

Beijing’s aggressive posture might backfire on its plans to present itself as a rising power that brings countries together as the United States looks increasingly inward.

“It is certain that China gained nothing by refusing a few words in the proposed draft when almost every other country accepted them,” said Shi Yinhong, professor of international relations at Renmin University in Beijing. “We have seen this sort of situation generally since a few years ago.”

The Chinese may have also gone unceremoniously to the foreign office because they felt targeted, and isolated, by the Americans, and were seeking last-minute support, the diplomat from the region said.

By delegating Mr. Pence to attend the APEC meeting, President Trump dispatched the administration’s point person for its get-tough-on-China policy. Mr. Pence was accompanied by the head of China policy at the National Security Council, Matthew Pottinger, also a hard-liner on China.

Mr. Pence delivered a scorching speech last month that broadened the disagreements with China beyond trade to include Beijing’s allegedly predatory behavior against its neighbors and its naval maneuvers in the South China Sea. He pledged the United States would “not stand down” in the face of China’s challenge.

The day before, Mr. Xi had vigorously defended the project, which is considered among the Chinese elite to be the foreign policy effort in which the president is most invested.

“It does not exclude anyone,” Mr. Xi said in his speech about the Belt and Road Initiative. “It is not an exclusive club closed to nonmembers, nor is it a trap as some people have labeled it.”

China may also have been rattled by the American decision to join hands with its major allies, Japan and Australia, to increase its economic development assistance to Papua New Guinea and to embark on redeveloping a naval port there at Manus Island.

Mr. Xi arrived in Papua New Guinea two days ahead of the APEC meeting, for which China financed roads and a $50 million renovation of a convention center. The Chinese leader stressed his nation’s largess to Pacific island nations like Papua New Guinea.

But China is the third-largest donor to these countries, trailing Australia and New Zealand, said Jonathan Pryke, an expert on the Pacific islands at the Lowy Institute in Sydney. The United States was the fourth largest, sending most of its aid to the northern Pacific countries of Palau, Micronesia and the Marshall Islands, Mr. Pryke said.

At the meeting, Mr. Pence announced that the United States would increase engagement in the region, pledging to join Australia and Japan in helping to bring electricity to 70 percent of Papua New Guinea by 2030. (Only 13 percent of the country currently has electricity.)

The United States is also working with Australia to develop the deepwater port at Manus Island, which lies 1,060 miles south of the American territory of Guam.

Manus Island played an important role for the United States Navy in the defeat of Japan during World War II. Now it could play a strategic role against China’s expansion in part because the port is big enough to hold large naval vessels and task groups, said Peter Dean, professor of war studies at the University of Western Australia.

“If the Chinese were able to land this as a base instead of the United States and Australia, then it would have had significant strategic implications,” Mr. Dean said.

Firms in certain sectors hiring amid weak economy, with 1,400 jobs up for grabs at Tampines career fair