KABUL, Afghanistan — Three U.S. presidents and 19 years later, it is President-elect Joseph R. Biden’s turn to inherit the American war in Afghanistan. The question that is leaving Afghans hanging is just how quickly he will remove troops.

It is a desperately difficult time for Afghanistan. American troops, honoring President Trump’s deal with the Taliban, are still on their way out of the country, despite the stalling of peace talks between the insurgency and the Afghan government, and a wave of intensified Taliban offensives near important cities.

Officials in Kabul are very aware that Americans are tired of the war — a fact made clear by a near absence of the issue in presidential debates, and by Mr. Biden’s seeming agreement with President Trump’s desire to get out of Afghanistan.

“It is past time to end the forever wars, which have cost the United States untold blood and treasure,” Mr. Biden wrote in Foreign Affairs earlier this year. “As I have long argued, we should bring the vast majority of our troops home from the wars in Afghanistan and the Middle East and narrowly define our mission as defeating al Qaeda and the Islamic State (or ISIS)."

Still, in Mr. Biden, Afghan officials said they hoped to gain a less capricious and more communicative ally, though they know he is unlikely to stop the troop withdrawal. 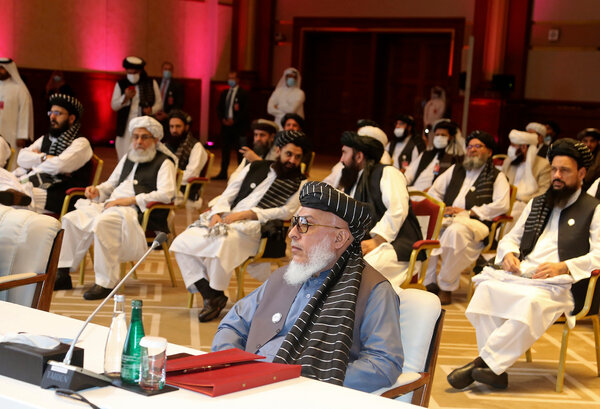 “We understand there’s not going to be U-turn on the U.S. side on the withdrawal of troops from Afghanistan,” said Nargis Nehan, a former minister of mines and petroleum under President Ashraf Ghani. “But under the leadership of the Biden administration, we hope and believe that it’s going to be done with a much more responsible strategy in comparison to the Trump administration.”

Both in Kabul and Washington, officials with knowledge of security briefings said there was fear that President Trump might try to accelerate an all-out troop withdrawal in his final days in office — though the amount of American infrastructure still in the country would be physically impossible to remove by January, according to security officials.

A Pentagon shake-up in recent days, while President Trump has sought to contest his election loss, has cast more confusion on the issue. Security officials said that on Thursday, the American commander in Afghanistan, Gen. Austin S. Miller, was traveling to Washington for consultations.

American commanders, while careful not to contravene President Trump in public, have warned that it was vital to keep the withdrawal contingent on the Taliban’s keeping their pledges.

Afghan officials are also publicly urging Mr. Biden to better support the stalled peace talks in Qatar, which some Afghans felt were pushed too hard by the Trump administration without enough protections for them. On Monday, Afghanistan’s second vice president, Sarwar Danesh, called on the incoming Biden administration to conduct a review of the Afghan peace process and to put more pressure on the Taliban to negotiate fairly.

A decade ago, as vice president in the Obama administration, Mr. Biden was the in-house skeptic of the war, pushing against the huge troop surge in Afghanistan that began in 2009.

For years, U.S. policymakers and officials likened the task of building new government institutions and modern security forces in Afghanistan in the middle of a war to building an airplane midflight. In 2009, Mr. Biden sought a different approach: to focus on international terrorist threats in Afghanistan and little else.

“I don’t think he has his changed his mind much since then: to get out of Afghanistan, let Afghans govern themselves, but keep a light footprint in the form of counterterrorism, primarily to ensure U.S. national security interests,” said Tamim Asey, a former Afghan deputy defense minister under Mr. Ghani.

That approach — keeping a small number of troops in Afghanistan as a counterterrorism force to keep Al Qaeda and Islamic State loyalists in check — has been urged by the Pentagon and some American lawmakers.

In the Feb. 29 agreement with the United States that started the troop withdrawal, the Taliban agreed to publicly separate itself from Al Qaeda — which was under the Taliban government’s protection when it launched the Sept. 11 terrorist attacks — and to deny terrorist groups the use of Afghan territory as a haven. But the troop withdrawal has continued even though last month a Qaeda leader was killed in a Taliban-controlled district in the country’s east, and there has been no evidence of any decisive severing of ties between the groups.

Afghan officials and analysts say they hope Mr. Biden will proceed more cautiously, and not be as likely to leave Afghanistan at the mercy of the Taliban and meddling neighbor countries.

“A commitment to defeating Al Qaeda and the Islamic State is something that is part of Afghanistan’s formula for long-term stability and serves an important role here,” said Orzala Nemat, an independent researcher in Afghanistan. “A symbolic presence of international military forces balances this very weak position that Afghanistan is in the region, surrounded by nuclear powers.”

Mr. Biden “knows Afghanistan, he has been here a dozen times as a senator and he has interacted with many Afghan leaders,” said Mr. Asey, the former deputy defense minister.

Afghan officials were quick to note that Mr. Biden and President Ghani have long been friendly toward each other. But Mr. Asey said that Mr. Biden also had a history of tension with other important Afghan officials — notably with former President Hamid Karzai, whom he told that Pakistan was “50 times more important” to the United States than Afghanistan, and whom he lectured about corruption.

One way that Afghan officials hope Mr. Biden can make a difference is by simply taking their concerns seriously. Some Afghan officials said they felt bullied by Trump and American officials to accept terms with the Taliban they did not agree to, particularly on the mass release of Taliban prisoners.

Human rights activists said they were also concerned that the peace process included too few protections for women and ethnic and religious minorities. In that, they are hoping the American Vice President-elect, Kamala Harris, can be an important voice as well.

“We hope she will be a strong advocate for Afghan women within the Biden administration,” said Ms. Nehan, the former mining minister, of Ms. Harris. “We felt abandoned by the Trump administration.”

“Whatever achievement in regards to women’s rights we are talking about does not just belong to Afghan women, it’s a universal achievement that we all have our own part in and a responsibility in protecting them,” she added.

While there are currently around 4,500 U.S. troops still in Afghanistan, Taliban officials have implied that the February deal would collapse if the incoming Biden administration prolongs the presence of American forces in the country, including any counterterrorism forces.

But for now the Taliban leadership will watch and wait, as their fighters keep up their offensives.

The United States has responded by increasing airstrikes in defense of Afghan forces. While permitted under the February deal, anything drastically more under a new administration, such as attacking Taliban behind their front lines, could nullify the agreement.

October was the deadliest month in Afghanistan for civilians since September 2019, according to data compiled by The New York Times. At least 212 civilians were killed.

In a statement, the Taliban called the U.S. election and its outcome an “internal issue of the United States.”

“The Islamic Emirate would like to stress to the new American president-elect and future administration that implementation of the agreement is the most reasonable and effective tool for ending the conflict between both our countries,” the statement said.

But Qari Mohammad Farooq, a Taliban shadow district governor in Jowzjan Province, laid it out plainly.

“I heard that Joe Biden won, but none of them are good for us,” Mr. Farooq said. “For me it doesn’t matter who won, but it is important that they must leave.”

Reporting was contributed by Najim Fahim from Kabul, Taimoor Shah from Kandahar and Eric Schmitt from Washington.