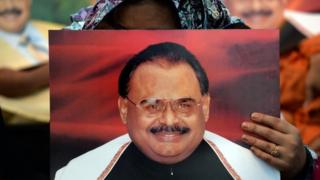 Altaf Hussain, the self-exiled founder of one of Pakistan’s biggest political parties, has been charged with a terrorism offence in the UK.

The Metropolitan Police confirmed that the 66-year-old had been charged in connection with a speech he made to supporters in Pakistan in August 2016.

Despite a split in the MQM, he still wields considerable influence in the party and its main power base, Karachi.

A statement from the Metropolitan Police said that the speech had been relayed from London to crowds gathered in Karachi on 22 August 2016.

Mr Hussain was arrested at his address in north London on 11 June. He is due to appear in court later on 10 October.

Correspondents say Mr Hussain is a maverick politician who has encouraged a personality cult to build up around him.

The Muttahida Qaumi Movement (MQM) has dominated politics in Karachi for three decades because of its support in the densely populated working class neighbourhoods of Urdu-speaking Muhajirs, descendants of Muslims who migrated from India when Pakistan was created in 1947.

From his base in London, Mr Hussain would address supporters of his MQM party in Pakistan’s biggest city via telephone. His messages would be relayed to crowds by loudspeaker.

The Pakistani authorities have repeatedly demanded action be taken against him – but his supporters have always maintained his innocence.

What is the MQM?

1984: Founded as the party of Urdu-speakers who migrated from India at the time of the 1947 partition, known as Muhajirs

1992: Altaf Hussain leaves the country after an arrest warrant is issued in a murder case; army claims to have busted “torture cells” used by MQM activists to punish opponents

2009: Under a 2009 amnesty in Pakistan 72 cases are dropped against Altaf Hussain, including 31 allegations of murder

2016: The party splits into two: a faction led by Altaf Hussain – the MQM-L – in London, and one in Pakistan – the MQM-P – which is opposed to him.

2018: The MQM-L faction boycotts the general election, citing what it calls the military’s oppression of Muhajirs. The MQM-P wins seven seats and becomes a member of Pakistan’s governing coalition