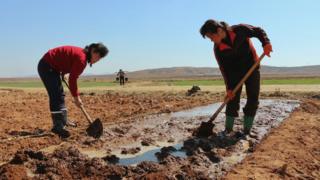 Chinese state media says both sides will discuss the political tensions on the Korean Peninsula, but China is also North Korea’s most important economic partner.

North Korea urgently needs food aid as a result of failed rains and a poor harvest.

So who’s sending aid to North Korea and how has this been affected by sanctions imposed against Pyongyang?

The United Nations recently estimated that more than 10 million people – around 40% of the population – are facing severe food shortages.

State-issued rations have dropped to 300g per person a day, according to an assessment by the UN.

Who is sending aid?

China is almost certainly North Korea’s largest aid donor but the extent of that support is difficult to determine.

That’s because Beijing also provides aid on a bilateral basis, rather than just co-ordinating through the UN.

China sent 240,074 tonnes of food aid in 2012 – more than 80 times the amount the European Commission gave North Korea that year – according to the UN.

In 2016, Beijing announced it was providing $3m in humanitarian aid to flood-hit North Korea after international agencies failed to raise sufficient funds.

A report to US Congress in 2014 said: “China, currently believed to be North Korea’s largest source of food aid, has no known monitoring systems in place.”

In response to the latest crisis, the UN has requested $120m from donors.

This week South Korea announced it was sending 50,000 tonnes of rice to North Korea through the World Food Programme (WFP).

This is in addition to $8m pledged in June by South Korea.

Other countries which have responded to the UN appeal include Switzerland, Sweden, Canada, Norway, France, Germany, Denmark, Finland and Ireland.

The existing international sanctions against North Korea do not explicitly prohibit humanitarian assistance and, earlier this year, the US eased its restrictions on aid and travel for aid workers.

However, aid organisations say the existence of sanctions makes it very difficult to operate in North Korea.

This month, a Finnish charity prematurely ended its food security and healthcare project, saying US sanctions made continued operations “impossible”. 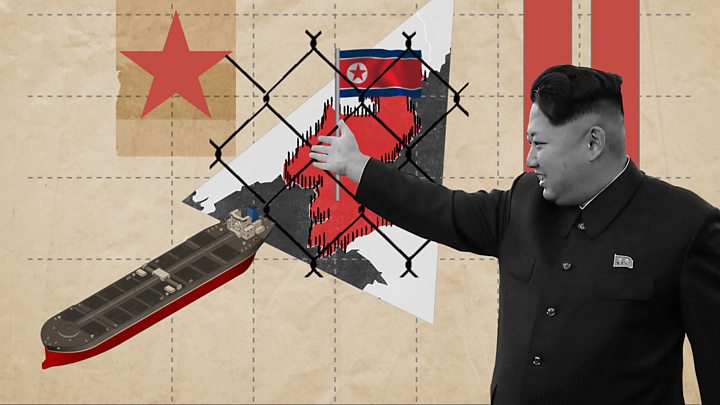 With tense diplomatic relations between Pyongyang and the rest of the world over the past decade, aid flows have come under increasing strain.

Since 2012, the UN says the gap between funds required and received for North Korea has been widening.

This is also reflected in data provided by the WFP for food aid shipments, which have shown a steady decline since 2015 despite the regular requests for support from UN agencies.

The decline in support for the North from South Korea has been particularly stark over the past decade.

For the decade after 2007 there was little aid of any kind provided either directly by the government or from South Korean NGOs.

This, however, has changed with the humanitarian support pledged in response to the latest crisis.

The United States used to be a major provider of aid to North Korea.

According to a Congressional Research Service report from 2014, the US accounted for more than half of the food aid from 1995 to 2008.

Since then, aid has been sporadically given, but this has been hampered by North Korean nuclear tests and plans to launch rockets.

In 2017, after a gap of six years, the US gave $1m to Unicef to assist with massive floods in North Korea.

Great Wall not willing to enter price war amid sales slowdown due to coronavirus: chairman