Jaswinder Singh Gill had plowed 20 years of savings from an earlier career as a mechanical engineer into his family’s nearly 40-acre plot in the northwestern Indian state of Punjab, just a dozen miles from the border with Pakistan. He has eked rice out of the sandy, loamy soil with the help of generous government subsidies for 15 years, in hopes that his son and daughter may someday become the sixth generation to work the land.

Then India suddenly transformed the way it farms. Prime Minister Narendra Modi last year pushed through new laws that would reduce the government’s role in agriculture, aimed at fixing a system that has led to huge rice surpluses in a country that still grapples with malnutrition.

But the laws could make Mr. Gill’s farm and many others like it unsustainable. They would reduce the role of government-run markets for grain, which the farmers fear would eventually undermine the price subsidies that make their work possible. If that happens, the livelihoods of millions of people who depend on the land could be in jeopardy.

Mr. Modi’s campaign has ignited one of the biggest and thorniest conflicts of his seven-year tenure.

Farmers from Punjab and elsewhere have camped outside the capital, New Delhi, for four months in protest. The country’s Supreme Court has suspended the laws while it figures out the next steps. The government has occasionally cut off internet access for protesters and tried to suppress criticism online. 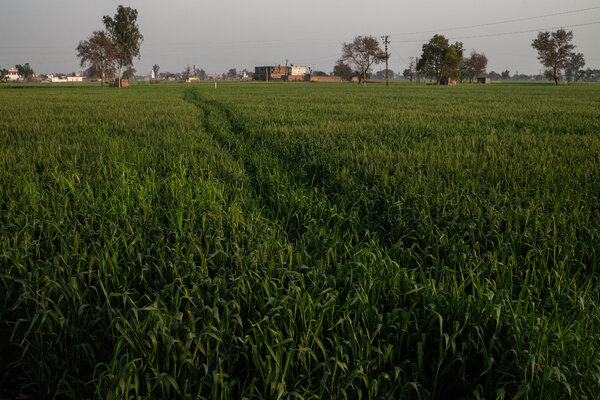 At the heart of the dispute lies the subsidy system that the government, economists and even many farmers agree is broken. But Mr. Modi’s haste to remake it — his political party pushed the laws though Parliament in a matter of days — could devastate vast swaths of the country where farming remains a way of life.

“Agriculture in India does need change,” said Devinder Sharma, an independent economist in Chandigarh, the capital of Punjab, “but this isn’t the way forward.”

Nearly 60 percent of India’s 1.3 billion people make a living from agriculture, though the sector accounts for only about 11 percent of economic output. For many, getting another job isn’t an option. The manufacturing sector has shrunk slightly since 2012, government figures show, while the work force has swelled.

“Our potential nonagricultural work force is growing very fast,” said Jayan Jose Thomas, an economist and professor at the Indian Institute of Technology in New Delhi. “They’re all looking for jobs.”

Officials in the ministry of agriculture in New Delhi did not respond to requests for comment.

Unquestionably, India’s current system is outdated. It was introduced in the 1960s to stave off a famine by encouraging farmers to grow wheat and rice. It included minimum prices set by the government, helping farmers sell what they grow for a profit.

“‘You produce as much as you can. Work hard,’” Mr. Gill, the farmer, said, citing the government’s instructions. “They made a solemn guarantee that they would pick up each and every grain.”

The prices are fixed at government-run markets called mandis, where farmers and buyers, for a fee, can meet where grains are sun dried, stored and sold. The fees get channeled to rural infrastructure projects, farmer pensions and programs that provide free technical advice on such matters as seed and fertilizer.

The system, along with improved techniques, greater use of machinery and fierce competition, increased yields. As a result, India has too much wheat and conventional rice — as compared with basmati rice — enough to fill more than 200,000 shipping containers. Subsidized rice is sold on the global market, raising hackles within the World Trade Organization.

At the same time, nearly 190 million people in India are malnourished, according to the Global Hunger Index. India’s surpluses are grown in the wrong places, and the public food rations system can’t transport all of the grain to the needy before it rots. The government doesn’t buy enough nutritious crops like green leafy vegetables, lentils, chickpeas and sorghum to incentivize farmers to grow them.

The imbalances don’t end there. Price supports help keep smaller farmers in business, but most don’t till enough land to turn a profit, leading to crushing debt and suicides.

The subsidies encourage farmers in Punjab, a relatively dry area, to grow conventional rice, which requires a lot of water. Rice and wheat irrigation is depleting the area’s water table, according to India’s Central Groundwater Board.

Mr. Gill once tried to grow basmati rice instead. More flavorful and nutritious than conventional rice, it also consumes less water, grows faster and sells at a premium on the international market. But government price rules don’t cover basmati rice. When he sold the basmati rice, Mr. Gill said, a private buyer shortchanged him.

Under Mr. Modi’s plan, corporate buyers would take a much greater role in Indian agriculture because farmers would have greater power to sell their crops to private buyers outside the mandi system, which he said would lift farmer incomes and increase exports.

The protests ignited because many farmers fear that the laws will eventually kill both the subsidies and the mandi system. The new laws would also make it more difficult for farmers to take their disputes with buyers to court.

Farmers point to an effort 15 years ago in the state of Bihar to deregulate agriculture. Supporters say it spurred growth, but some economists and farmers in Punjab consider it a failure. Some farms in Bihar ship their harvests to Punjab’s mandis for the guaranteed prices, while many of those who lost their farms became migrant laborers in Punjab.

The change in the farm laws is an example of how Mr. Modi has a penchant for quick, dramatic moves that have roiled the country. Punjab’s farmers and local officials want slower change and a shift in subsidies to support different crops. In interviews, the farmers of Bhagwanpura, population 1,620, said they feared losing their farms and having no other work.

Ms. Kaur, a widow, said her family lost most of its farm because her late husband needed to feed his drug and alcohol habit. It is only a half acre in size, compared with India’s average of about two and a half.

With revenue from her grain sales, Ms. Kaur said, she and her two children can barely eat. A relative pays one child’s tuition at a local Catholic school. She is negotiating with the school to waive fees for the other.

A big cut of the sales goes toward paying down her $4,100 in debt for seed and fertilizer.

“I repay every six months,” she said, “but with interest, the amount never goes down.”

If she loses her farm, “I will have to beg,” she said.

Many of the farmers who have joined the protests have left family members to tend the land. Others pool their money to support the protests.

“We feel that the struggle of Punjab is everyone’s struggle,” said Gurjant Singh, the village head, “and unless everyone contributes to that cause, the protest will not be successful.”

Mr. Gill lent his 17-foot tractor-trailer and donated money and grain to those taking turns. For him, defending the farm is a family matter.

His grandfather built the farmhouse after the bloody partition of Pakistan from India in 1947 forced him to flee Pakistan. The subsidies of the 1960s brought the farm prosperity, making it the largest landholding in this corner of Punjab.

Since he took over the farm in 2005, Mr. Gill has plowed his savings into a smart irrigation system, built a machine to clear crop residue and invested in a pair of John Deere tractors.

As he spoke, prayers from a Sikh gurdwara, or temple, bellowed through a loudspeaker across Mr. Gill’s wheat fields.

“Work hard, worship the Almighty, and share the benefits with all mankind,” Mr. Gill said. “That is what is taught to us at the gurdwara every day.”

His fears for the future, he said, should not hinder his work.

“What’s going on here is within me,” he added, touching his heart. “I should keep it in myself.”