SHANGHAI — Yuan Longping, a Chinese plant scientist whose breakthroughs in developing high-yield hybrid strains of rice helped to alleviate famine and poverty across much of Asia and Africa, died on Saturday in Changsha, China. He was 90.

The cause was multiple organ failure, China’s main state-run newspaper, People’s Daily, reported. An earlier report from an official news service in Hunan Province, of which Changsha is the capital, said Mr. Yuan had been increasingly unwell since a fall in March during a visit to a rice-breeding research site.

Mr. Yuan’s research made him a national hero and a symbol of dogged scientific pursuit in China. His death triggered messages of grief across the country, where Mr. Yuan — slight, elfin-featured and wizened in old age — was a celebrity. Hundreds left flowers at the funeral home where his body was being kept.

Mr. Yuan made two major discoveries in hybrid rice cultivation, said Jauhar Ali, the senior scientist for hybrid rice breeding at the International Rice Research Institute in Los Baños, the Philippines. Those discoveries, in the early 1970s — together with breakthroughs in wheat cultivation in the ’50s and ’60s by Norman Borlaug, an American plant scientist — helped create the Green Revolution of steeply rising harvests and an end to famine in most of the world.

Mr. Borlaug, who was awarded the Nobel Peace Prize in 1970, died in 2009. Mr. Yuan’s research arguably had effects at least as broad, since rice is the main grain for half the world’s population and wheat for a third. 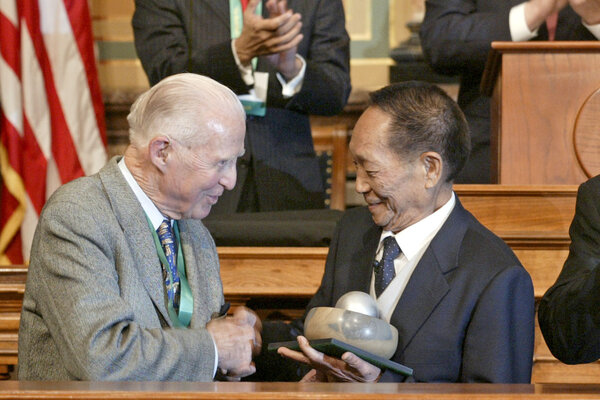 By 1970, Mr. Yuan was growing frustrated with his halting progress in creating more productive rice crops. He hit upon a shift in strategy: Search for wild varieties across remote areas of China for more promising genetic material.

A breakthrough came when Mr. Yuan’s team found a stretch of wild rice near a rail line on Hainan Island, in southernmost China. The following year, Mr. Yuan separately published a research paper in China that explained how genetic material from wild rice could be transferred into commercial strains.

Once the wild rice’s genetic material was added, the world’s heavily inbred commercial rice strains could be hybridized with ease to produce big gains in crop output.

At that time, the world of rice scientists was full of talk of developing hybrid strains. Three similar papers on rice hybridization were published in 1971: by the International Rice Research Institute, the Indian Agricultural Research Institute in Delhi and a team of California researchers.

But Mr. Yuan’s paper was the most practical and detailed of the four. “His paper was much better in terms of the technology,” Mr. Ali said. “It was China who led the game afterward.”

While the teams in India, the Philippines and the United States kept doing research after publishing their papers, Mr. Yuan immediately developed hybrid strains of rice the next year. To create the hybrids, he used the wild rice from Hainan.

By 1978, Mr. Yuan had already overseen the start of large-scale production of hybrid rice in Hunan Province, in China’s southwest. He ended up doing most of his research there for the rest of his life. He also oversaw research in Hainan, where he suffered his fall in March.

Hybrid rice varieties typically produce 20 to 30 percent more rice per acre than nonhybrid strains when cultivated with the same transplant techniques, fertilizer and water. But as Mr. Yuan and his ever-growing teams of rice experts introduced hybrid strains across Asia and Africa, they also taught farmers a wide range of advanced rice-growing techniques that produced further gains.

Steeply rising yields helped to make famines a distant memory in most rice-growing countries. “He saved a lot — a lot — of lives,” said Hu Yonghong, the director of the 500-acre Shanghai Chenshan Botanical Garden.

By coincidence, a dozen of China’s top plant-breeding experts gathered under overcast skies on Saturday evening in the middle row of an outdoor symphony concert at the botanical garden. As the musicians tuned their instruments, the scientists took turns talking about Mr. Yuan.

Xu Zhihong, a former president of Peking University and a longtime professor of life sciences there, said that Mr. Yuan’s underlying talent was always clear: He paid minute attention to rice plants and how they grew.

“His personal interests were really very focused on rice, so every year he spent a lot of time in the field,” said Professor Xu, who had worked with Mr. Yuan on various national agriculture committees since 1980.

Mr. Yuan also had an enormous effect on Chinese agriculture, the botanists agreed, because he was a good mentor and a strong leader of teams, and so he ended up playing a far larger role than if he had confined himself to laboratory work and writing papers.

“I know some of his colleagues in Hunan — they all had very good achievements under his supervision,” said Chen Xiaoya, a professor of the Chinese Academy of Sciences and director emeritus of the academy’s Plant Physiology and Ecology Institute.

Starting in the 1980s, after decades of working in relative obscurity, Mr. Yuan became nationally celebrated as a Chinese scientist making world-class advances. His discoveries became a point of pride for China, whose leaders had become painfully aware that other countries had raced ahead in science.

“That became a symbol of scientific innovation, not only of agriculture but of all science,” Professor Chen said.

After his discoveries in the early 1970s, Mr. Yuan became a strong advocate for sharing his breakthroughs internationally, instead of using them to achieve Chinese dominance in rice production.

He took the initiative in donating crucial rice strains in 1980 to the International Rice Research Institute, which later used them to develop hybrid varieties that could also grow in tropical countries. Mr. Yuan and his team taught farmers in India, Madagascar, Liberia and elsewhere to grow hybrid rice.

Yuan Longping was born on Sept. 7, 1930, in Beijing — or Beiping, as it was then called — into a family that was unusually well educated for that time. His mother, Hua Jing, taught English, and his father, Yuan Xinglie, was a schoolteacher who later became a railroad official. Mr. Yuan often cited the example set by his mother.

“She was an educated woman at a time when they were uncommon,” he said in a memoir published in 2010. “From early on I came under her uplifting influence.”

Mr. Yuan was the second of six siblings. His life and schooling were unsettled as war, the Japanese invasion and economic upheaval forced the family to move around southern China. But he said his parents insisted that their children receive a solid education.

He entered college in 1949, just as the Chinese Communist Party was consolidating its control of the country, and chose to specialize in agronomy at a school in the southwest. His initial inspiration for choosing agricultural science — despite not having a rural background, and despite the misgivings of his parents — came partly from visiting a farm for a school excursion, and partly from an idyllic scene in Charlie Chaplin’s film “Modern Times,” in which the Little Tramp savors grapes and fresh milk at the doorstep of his home.

“As I grew older, the desire became stronger, and agronomy became my life’s vocation,” he wrote in his memoir.

Mr. Yuan chose to specialize in crop genetics at a time when the subject was an ideological minefield in China. Mao Zedong had embraced the doctrines of Soviet scientists who rejected modern genetics and maintained that genes could be directly rewired by altering environmental conditions, such as the temperature. They claimed this would open the way to dramatic rises in crop yields.

But outside class, Yuan studied the findings of Gregor Mendel and other pioneers in genetics, encouraged by Guan Xianghuan, a professor who rejected Sovet dogma. Later, in the 1950s, Professor Guan was labeled a “rightist” enemy of the Communist Party for rejecting the Soviet ideas, and he took his own life in 1966 after facing renewed persecution during Mao’s Cultural Revolution.

After graduating in 1953, Mr. Yuan took a job as a teacher at an agricultural college in Hunan Province, keeping up his interest in crop genetics. His commitment to the field took on greater urgency from the late 1950s, when Mao’s so-called Great Leap Forward — his frenzied effort to collectivize agriculture and jump-start steel production — plunged China into the worst famine of modern times, killing tens of millions. Mr. Yuan said he saw the bodies of at least five people who had died of starvation by the roadside or in fields.

“Famished, you would eat whatever there was to eat, even grass roots and tree bark,” Mr. Yuan recalled in his memoir. “At that time I became even more determined to solve the problem of how to increase food production so that ordinary people would not starve.”

Mr. Yuan soon settled on researching rice, the staple food for many Chinese people, searching for hybrid varieties that could boost yields and traveling to Beijing to immerse himself in scientific journals that were unavailable at his small college. He plowed on with his research even as the Cultural Revolution threw China into deadly political infighting.

In recent decades, the Communist Party came to celebrate Mr. Yuan as a model scientist: patriotic, dedicated to solving practical problems, relentlessly hard-working even in old age. At 77, in 2008, he even carried the Olympic torch near Changsha for a segment of its route to the Beijing Olympics.

Unusually for such a prominent figure, though, Mr. Yuan never joined the Chinese Communist Party. “I don’t understand politics,” he told a Chinese magazine in 2013.

Even so, the state news agency, Xinhua, honored him this weekend as a “comrade,” and his death brought an outpouring of public mourning in China. In 2019, he was one of eight Chinese individuals awarded the Medal of the Republic, China’s highest official honor, by Xi Jinping, the national leader.

Mr. Yuan is survived by his wife of 57 years, Deng Zhe, as well as three sons. His funeral, scheduled for Monday morning in Changsha, is likely to bring a new burst of official condolences.

As recently as this year, Mr. Yuan was still working on developing new varieties of rice, according to Xinhua.

“There’s no secret to it; my experience can be summed in four words: knowledge, sweat, inspiration and opportunity,” Mr. Yuan said in a video message last year encouraging young Chinese to go into science. In English, he quoted the scientist Louis Pasteur: “Chance favors the prepared mind.”