SYDNEY, Australia — Seeking to address rising anger over allegations of rape and misogyny against members of his government, Prime Minister Scott Morrison of Australia reshuffled his cabinet on Monday, demoting two ministers tied to separate scandals, but keeping them in senior positions.

Defense Minister Linda Reynolds will become the minister for government services, Mr. Morrison said. Attorney General Christian Porter will give up that role while continuing to serve in the cabinet as the minister for science, industry and technology.

Mr. Morrison also announced a new task force on women’s equality, safety, economic security, health and well-being, while adding several women to the cabinet. They include Michaelia Cash, who will become attorney general, and Karen Andrews, who will become minister for home affairs.

“These changes will shake up what needs to be shaken up,” Mr. Morrison said, adding that having more women in the cabinet would bring “a fresh lens” to the government’s challenges.

The widely expected reshuffle comes more than a month after a former staff member in Ms. Reynolds’s office, Brittany Higgins, accused a more senior colleague of raping her in Parliament House in 2019, and three weeks after Mr. Porter was accused of committing rape when he was a teenager.

Mr. Porter has denied the allegation against him and resisted calls for an independent inquiry. Ms. Reynolds has apologized to Ms. Higgins for speaking with her about the alleged assault in the same room where it was said to have occurred, as well as for calling Ms. Higgins a “lying cow” after she went public with her allegations.

The reassignments are unlikely to tamp down the public outrage that has surged in recent weeks, after years in which complaints about Australia’s brutal culture of misogyny in politics were ignored or actively suppressed by the two major parties. 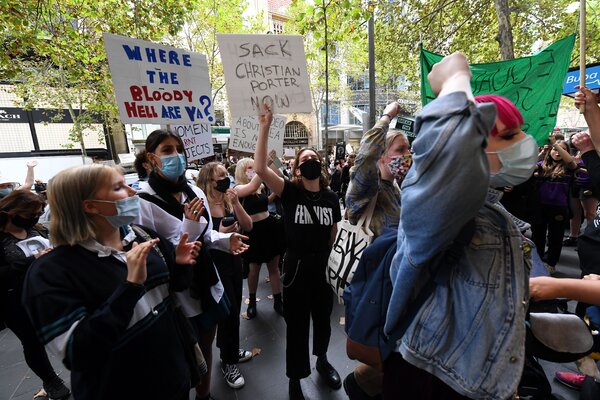 Susan Harris Rimmer, a law professor at Griffith University, called the reshuffle “too little, too partial, too late.”

“It won’t restore the confidence of female voters,” she said.

Mr. Morrison’s response to criticism about sexism in politics has been widely condemned as weak and tone-deaf. He announced the new cabinet on Monday with Marise Payne, the foreign minister and minister for women, who he said would join him in leading the new task force for women. But at one point, he also referred to Ms. Payne as “effectively the prime minister for women” who would be the main point person for “my female ministers.”

To critics, the description sounded patronizing and only inflamed the crisis over gender dynamics in Australian politics, which one journalist has described as putting Mr. Morrison’s government in a “death spiral.”

The intense public scrutiny of Parliament began six weeks ago after Ms. Higgins came forward. Mr. Morrison initially resisted commenting. He later apologized, while suggesting that it had taken a chat with his wife — who he said had asked, “What if it was one of your daughters?” — to get him to do so.

When the accusations about Mr. Porter surfaced in a long letter by the alleged victim, made public after she died by suicide, Mr. Morrison admitted that he had not read it. After the police dropped a criminal case against Mr. Porter, citing insufficient evidence from an incident alleged to have occurred 33 years ago, Mr. Morrison said the attorney general was still fit for the highest legal office in the country, despite the swirl of distrust surrounding him.

On March 4, when thousands of women protested sexual assault and sexism outside Parliament, Mr. Morrison refused to attend the rally. He later declared it a “triumph of democracy” that demonstrators had been able to gather without being “met with bullets” — a comment that only added more fuel to the public anger.

“I am shocked, and I am disgusted. It is shameful,” he said last Tuesday.

“I acknowledge that many Australians, especially women, believe that I have not heard them,” Mr. Morrison added. “That greatly distresses me.”

But to many, a cabinet reshuffle should be only the first step in a broader response.

“The leadership position the prime minister has taken is welcome,” said Anne Webster, a member of Parliament with the National Party who filed a formal complaint against a colleague last week over a recent case of sexual harassment. “Everyone is on alert now and wondering: Where are we going from here?”

Jo Dyer, a friend of the woman who accused Mr. Porter, said she and many others would continue to push for an independent inquiry into the rape allegation, noting that changing Mr. Porter’s role did not address the larger question of whether he was fit for public office.

On Monday, Mr. Morrison explained that Mr. Porter was being moved in part to address a legal technicality — a perceived conflict of interest.

As attorney general, Mr. Porter would have been responsible for nominating judges to the federal court. He has personally brought a case before that same court, a defamation claim against the Australian Broadcasting Corporation over its coverage of the rape allegation.

The prime minister said he had retained Mr. Porter in the cabinet because he was “a very capable minister.”

In a statement, Mr. Porter said he did not regret filing the defamation lawsuit, and would give his new portfolio “all the energy and commitment I have.”