Years of drought, fires and habitat loss have drastically reduced the population of the iconic marsupial. 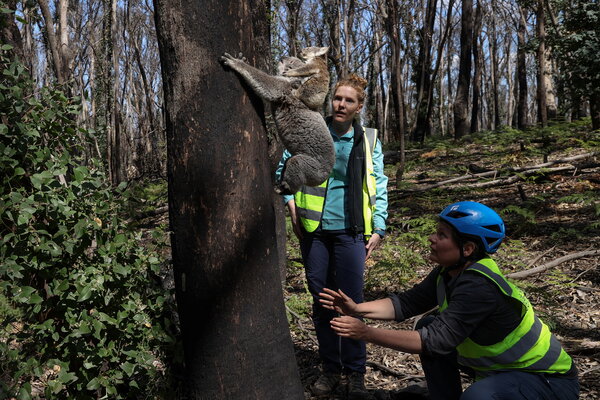 SYDNEY, Australia — The Australian government on Friday declared the koala an endangered species, as drought, bush fires, disease and habitat loss have drastically reduced the numbers of an animal that is an emblem of the country’s unique wildlife.

The announcement, by the country’s environment minister, came two years after a parliamentary inquiry predicted that koalas could be extinct by 2050 without urgent government intervention.

Reclassification from vulnerable to endangered does not require the Australian government to take any special action. But it separately announced that it would adopt a recovery plan for the koala issued by the country’s environmental department.

The plight of the koala gained global attention in 2019 when bush fires raged over millions of acres in Australia, blackening the animal’s habitats. A report commissioned by the World Wildlife Fund-Australia estimated that 60,000 koalas had been “killed, injured or affected in some way.”

In response, the Australian government committed 18 million Australian dollars ($12.8 million) to be split between restoring the koala’s habitats and investing in koala health research.

In 2020, W.W.F.-Australia, the International Fund for Animal Welfare and the Humane Society International collectively nominated the animal for listing as an endangered species. The groups found that koala populations in the states of Queensland and New South Wales had decreased by 50 percent or more since 2001.

It’s unclear how many koalas remain. Efforts to count the animals, which are continuing, have proven extremely difficult.

While the animal welfare groups welcomed the Australian government’s actions announced on Friday, others said that key problems — specifically land clearing, deforestation and resulting habitat loss — had been neglected.

Deborah Tabart, chairwoman of the Australian Koala Foundation, said the animal’s new status “doesn’t mean anything.” The federal government, she added, “may be offering our koalas a nice new word, but behind all the photo opportunities and political rhetoric they continue to approve the destruction of the koala habitat.”

“If the clearing of the koala habitat continues,” Ms. Tabart said, “a further status change is imminent — from endangered to extinct.”