It was his last political act. Mr. Hawke, a charismatic reformer who deregulated the economy and made Australia a linchpin of global security as the Labor Party’s longest-serving prime minister, died on Thursday at age 89.

The loss of such a titanic figure in Australian politics just two days before a federal election has thrown this country into deep reflection. It has unleashed pride and grief but also frustration with what many describe as the absence in Australia’s current leaders of the attributes Mr. Hawke embodied: vision, authenticity, worldliness and empathy.

“He was a unifier,” said Kris Neill, 59, a communications consultant and former adviser to several Labor Party politicians. “Bob Hawke made it a core part of his government to govern for everybody — I don’t think we saw in his time the glaring polarization that we’re seeing in politics today.”

The two candidates vying for power now, Mr. Shorten and the incumbent prime minister, Scott Morrison of the center-right Liberal Party, have made no secret of their dislike for each other. Voters will go to the polls on Saturday with a choice between two vituperative career politicians who have been arguing primarily about how to run an economy that has not seen a recession in 27 years.

[Want Australia news in your inbox? Sign up for the weekly Australia Letter.]

There has been little talk of Australia’s role in the world or any of the other issues that Mr. Hawke prioritized.

Yet with polls showing a close race, and with neither leader commanding the kind of admiration Mr. Hawke attracted for decades, both Mr. Shorten and Mr. Morrison are now telling voters how much they had in common with him.

Mr. Morrison, a rugby-loving journeyman of a politician who rarely meets a voter whose hand he doesn’t want to shake, praised Mr. Hawke’s “accessibility, his understanding of Australian life.” 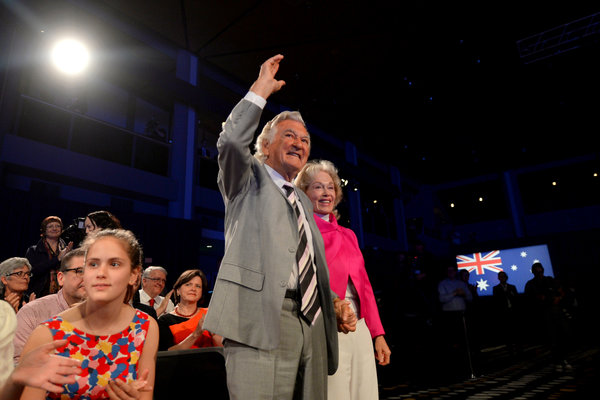 Mr. Shorten, a former union leader often criticized for being too calculating and cautious (despite Mr. Hawke’s praise), told reporters that “he was a hero of mine” — then cited Hawke policies that lined up with his own.

“I liked his message of bringing people together, of getting the workers and unions working with employers,” he said in a radio interview on Friday morning. “I loved his message about protecting the environment.”

Mr. Hawke is, of course, an impossible act to follow. He was a maverick who led his center-left Labor Party to four consecutive election victories in the 1980s and early ’90s. He was a union leader who also pushed through free-market liberalization, cutting protective tariffs and privatizing state-owned industries.

He was also a Rhodes Scholar and a flawed husband whose image was hurt by his admitted adultery toward the end of his career.

Through it all, in the minds of many Australians, he was one of them: a leader just as comfortable with wine-sipping elites as beer-chugging farmers and ascetic environmentalists.

“Hawke was authentic in just about every which way,” said Stephen Loosley, national president of the Labor Party in the early 1990s, who worked on campaigns with Mr. Hawke for decades. “What you saw with him privately was the projection of him publicly.”

Memories of his boldness and his heart for all Australians were flooding social media.

Many Chinese-Australians, for example, were sharing clips of Mr. Hawke becoming weepy as he discussed the Tiananmen Square massacre. In the aftermath, he immediately offered humanitarian visas to 20,000 Chinese students — and later, their families were welcomed too.

“He had courage, the courage to do what he thought was right,” said Maree Ma, a general manager at an independent Chinese-language media company in Sydney. On Thursday night, she was one of many Australians of Chinese descent who tweeted out their appreciation.

Others noted that Mr. Hawke often tried to force Australia to confront its racism against Aboriginal Australians, while also pushing the country’s foreign policy to be both more regional and more connected to the United States, partly through the establishment of an important intelligence base at Pine Gap in central Australia.

Repeatedly, he proved to be externally focused in a country that often favors the parochial, even as he was also willing to fight for the very local — at one point saving a beloved river in Tasmania, the Franklin, from being dammed.

Many of these acts were not especially popular with the country at the time. Mr. Hawke pushed them anyway, then worked to persuade Australians they were worthwhile. In other words, he led.

“That’s not something we’re seeing at the moment — Parliament getting ahead of voters and bring voters with them,” said Jill Sheppard, a politics lecturer at the Australian National University. “Politicians are much more likely to hang back and minimize the risk than act. They end up acting five or 10 years after voters wanted to see something happen.”

The politics of the past few years, for example, have been shaped by Australia’s belated acceptance of same-sex marriage in 2017, years after majority public opinion favored it, and by the government’s lack of action on carbon emissions, even though most Australians are demanding bolder solutions for climate change.

Many Australians are hoping that their next leader will do less following.

“Politicians these days are somewhat disconnected, and they seem to be more open about peddling their own agenda,” said Kim Jackson, 65, a member of the Australian Defense Force who was picking up his dry-cleaning near a military base in Sydney on Friday.

In the meantime, many Australians seem to be reflecting not just on the politics of Mr. Hawke, but also on his humanity. His letters to voters over many decades were being widely shared.

One woman, Tracey Corbin-Matchett, said on Twitter that she wrote to Mr. Hawke while struggling with the death of her grandmother.

“Perhaps when we grow very old our bodies get worn out, or certain parts break down, like parts in an old car,” the letter read. “None of us can be sure of how long we will live. Because this is so I think you should try not to think too much about dying but think about all the nice things around you that make life so precious to us all.”

Ms. Corbin-Matchett said she had cherished his wisdom for years. “His letter back to me,” she wrote, “is my most treasured childhood memory.”

Want more Australia coverage and discussion? Sign up for the weekly Australia Letter, start your day with your local Morning Briefing and join us in our Facebook group.

Shock, Disgust and Disbelief in Hometown of Suspect in New Zealand Shootings