Home » Australasia » Australia Reacts to a Facebook Without News

If you’re reading this, it’s not because someone you know posted it on Facebook. Though most readers of the Australia Letter come to it via their inboxes, a fair number of people find our weekly dispatches thanks to friends sharing on Facebook. Some folks click through links posted on the New York Times Australia Facebook page. But no more.

As of yesterday, Facebook is no longer allowing Australian users to view or post news stories on the platform. This goes for local and international media organizations, including The New York Times. It also is not allowing Australian media organizations to post content to users outside of Australia — and all of this in reaction to a proposed Australian law that would require tech companies to pay publishers for articles seen across their platforms.

It’s no secret that most media companies (The New York Times included) get a substantial portion of their web traffic from Facebook. In essence, Facebook is calling the bluff of the Australian law and the media companies pushing for it — they’re saying, in effect, you need us more than we need you.

But for many users, this also changes the function of Facebook significantly. Long gone are the days when Facebook was just a place to catch up with faraway relatives and stalk old lovers — like lots of people, I rely on it (and other social media platforms, Twitter in particular) to let the media companies I follow deliver breaking news, and to see what articles friends are sharing.

Our bureau chief, Damien Cave, wrote yesterday about the reactions of Australians, as well as the fact that many non-news pages — government agencies, nonprofits — were caught in the dragnet (while conspiracy pages with links to false news were unaffected).

On the NYT Australia Facebook page, I asked for reactions from readers who could no longer post or find news on the site. Within hours, there were hundreds of comments. The dismay was fairly universal (with the occasional comment along the lines of: “I have all the news apps, it doesn’t affect me”), but opinions about where to lay the blame tended to diverge.

“It shows how much power social media companies have, and the concerns with what happens when that is unchecked,” Hanna Carson wrote. “Many people applauded when Trump was banned from Twitter and other social media — and I understand that sentiment — but that action effectively silenced him. How many Australians will choose to actively seek out news on other platforms — or go to a news site to get it directly? These are the actions I’d expect from a totalitarian government, not from a private enterprise.”

Many others blamed the greed of Australian news companies and the politicians who support them.

“We are victims of an Australian Government which acts as a lap dog for the Murdoch media who in turn have companies like The Guardian trailing in their wake, all with their hands out to squeeze the big technos via the Federal Government,” wrote Brian Blackwell. “It’s the consumer who is being done over.”

Alison Mooney more or less agreed: “This reeks of our government acting on behalf of Murdoch, and how truly out of touch Australia’s leaders are,” she wrote. “As if Facebook would agree to this, imagine the precedent it would set globally!”

Australians being Australians, finding humor in every conflict, there were also quite a few readers who were worried specifically about The Betoota Advocate, Australia’s much-loved satirical newspaper, which many of you will be happy to know, lives on in the Facebook universe with its page intact.

Gabriella Coslovich, however, may have provided the most useful gem of insight, with a very simple reminder: “We all managed before Facebook.”

How do you feel about Facebook’s decision to ban news in Australia? And have your social media habits changed — if so, how? Let us know at [email protected]

Here are this week’s stories: 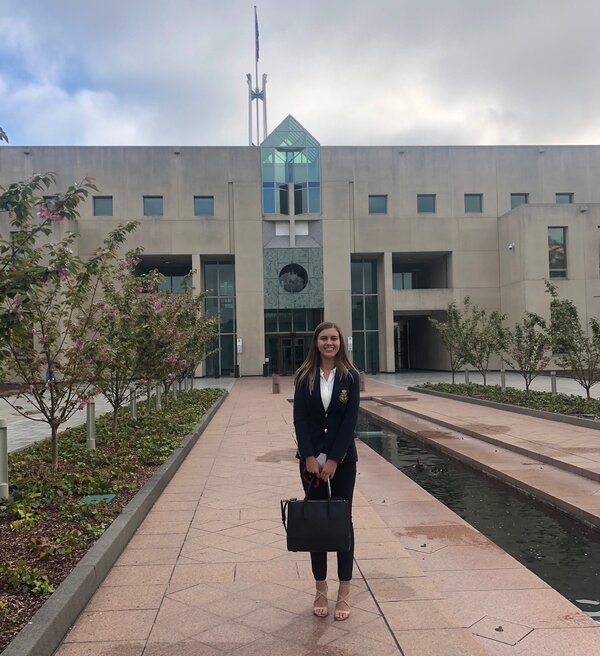 Parliament Rape Claim Roils Australian Government. A former government staff member said she had been made to choose between going to the police and keeping her job. Prime Minister Scott Morrison apologized.

Facebook’s New Look in Australia: News and Hospitals Out, Aliens Still In. The social network’s decision to block journalism rather than pay for it erased more than expected, leaving many outraged and debating what should happen next.

Facebook Blocks News in Australia, Diverging With Google on Proposed Law. With Australia moving to make the tech companies pay for news, Facebook took a hard line, while Google has struck deals to pay publishers.

Google Is Suddenly Paying for News in Australia. What About Everywhere Else? Pathbreaking legislation showed that even a small nation can get the tech giant to bend. But the United States seems unlikely to follow.

At 35, a Tennis Magician Brings Her Tricks to a First Quarterfinal. Hsieh Su-Wei’s overhead drop shots, wicked spins and two-handed shots can rattle her opponents.

Australians at Home Open Find Success After Year Without Much Tennis. Facing Australia’s strict quarantine rules, Ashleigh Barty, the No. 1 women’s player in the world, skipped tennis last summer and fall. So did some other Australians. They are doing just fine.

New Zealand to Roll Out Free Period Products to All Students. The program, designed to reduce “period poverty,” will begin in June.

Auckland Locks Down After Three Positive Coronavirus Cases. Prime Minister Jacinda Ardern of New Zealand announced on Sunday that Auckland would go into a three-day lockdown due to three unexplained positive coronavirus test results in a single family.

A Hitchhiker’s Guide to an Ancient Geomagnetic Disruption. A shift in Earth’s poles 42,000 years ago may have drastically altered the planet’s climate, scientists have found — and they’re naming the period after the author Douglas Adams.

Biden Administration Formally Offers to Restart Nuclear Talks With Iran. President Biden campaigned on restoring an accord limiting Iran’s nuclear program. It remains unclear if Tehran, which is demanding that sanctions be lifted, will accept the offer to talk.

NASA’s Rover Lands on Mars to Renew Search for Extinct Life. Perseverance’s arrival extends the successful U.S. landing record on the planet, and brings sophisticated tools to the hunt for alien life.

As Israel Reopens, ‘Whoever Does Not Get Vaccinated Will Be Left Behind.’ New government and business initiatives are moving in the direction of a two-tier system for the vaccinated and unvaccinated, raising legal, moral and ethical questions.

Rush Limbaugh Dies at 70; Turned Talk Radio Into a Right-Wing Attack Machine. With a following of 15 million and a divisive style of mockery, grievance and denigrating language, he was a force in reshaping American conservatism.

7 Virus Variants Found in U.S. Carrying the Same Mutation. Scientists don’t know yet whether the mutation makes the variants more contagious, but they are concerned that it might.

… And Over to You

Last week, we asked what you thought of Australia’s decision to host the Australian Open. Here are some reader responses:

I think it is *insane* to quarantine athletes and their teams in hotels in our most densely populated cities. They should be housed in the country in proper quarantine quarters or at least in caravan park-type accommodation in places where the population is sparse and in communities that really need the influx of cash. Plus, in the country in those settings, the athletes would have access to the outdoors for their training — and keep far, far away from our densest population centers for the 14 day quarantine period.

I live in Melbourne. I thought the decision to host the Australian Open was a mistake, and I am not alone. I have often attended the Open in past years, but not this year. Many Australians are stuck overseas, unable to return. Here in Australia, while we have recently been able to live relatively normally, we feel like sitting ducks for these new Covid variants. Our state governments have been responsible for keeping the virus under control. Their actions have been in defiance of Scott Morrison, who, without the interference of the states, would have opened things up, and even now is lagging well behind other countries in rolling out the vaccines. Holding the Open in the middle of a very dangerous pandemic was dangerous and unnecessary.

Melbourne 'in lockdown' as one dead, two injured in city stabbing