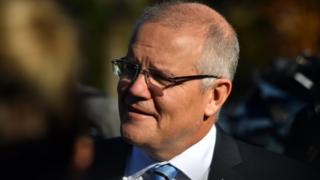 Australian Prime Minister Scott Morrison has been egged by a protester while campaigning ahead of the nation’s general election.

The egg grazed Mr Morrison’s head but did not break, local media said. The incident also knocked an elderly woman to the ground.

Footage showed a 25-year-old woman being restrained at the scene. Police later said she had been arrested.

The incident happened at a Country Women’s Association event in Albury, about 330km (200 miles) south-east of Canberra. No-one was injured.

.@tomwconnell: It looks like the egg basically bounces straight off @ScottMorrisonMP. This has just happened at the Country Women's Association.

Farmers in Australia have faced protests by vegan activists in recent times.

Mr Morrison is not the first Australian politician to be targeted by an egg-wielding protester this year.

A 17-year-old boy was later cautioned by police over the egg incident.

Australians are due to vote in a general election on 18 May.