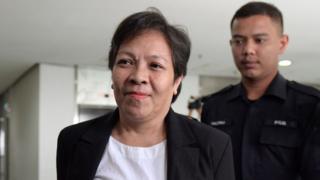 An Australian woman given the death penalty in Malaysia for drug smuggling has had the sentence overturned.

Maria Elvira Pinto Exposto, 55, was arrested at a Kuala Lumpur airport in 2014 after she was found carrying 1.1kg (2.4lbs) of crystal methamphetamine.

She has always maintained she was tricked into carrying the drugs after falling for an online romance scam.

Malaysia’s highest court has now accepted her appeal and she is expected to be released soon.

‘An eye opener for judges’

Ms Exposto has always said she believed she had developed an genuine online relationship with a US soldier serving in Afghanistan, who she knew as Capt Daniel Smith. She received regular photos, videos and emails, which were in reality being sent by fraudsters.

She said that in 2014 she was instructed to go to Shanghai, to sign papers which would enable them to get married. When she left China, a friend of “Capt Smith” asked her to take some Christmas presents back to Australia.

She was transiting through Kuala Lumpur when she handed over her bag for screening and customs officials found the drugs sewn into the lining of her luggage.

Her defence has always insisted a knowingly guilty person would never have volunteered for screening.

After three years in prison, she was found not guilty of drug trafficking in December 2017, with the court accepting her argument that she had been unaware of the presence of drugs in her luggage.

That was later overturned and she was sentenced to death. She spent 18 months on death row before the Federal Court in Putrajaya accepted her appeal on Tuesday.

Her lawyer, Shafee Abdullah, told reporters at the court the ruling would have “a high impact”.

“It will be an eye opener for judges… This is an illustration, how an innocent woman can be scammed on the internet,” Reuters quoted him as saying.

Anyone found in possession of at least 50g (1.75oz) of crystal meth is considered a trafficker in Malaysia.

Three Australians have been put to death for drug offences in Malaysia: Kevin Barlow and Brian Chambers in 1986, and Michael McAuliffe in 1993.

Malaysia is currently not carrying out any executions, while it debates scrapping mandatory death sentences for certain crimes altogether.