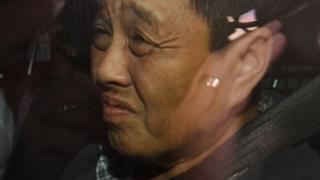 An Australian woman accused of hiding sewing needles inside strawberries in a high-profile sabotage case was motivated by spite, a court has heard.

My Ut Trinh, 50, was arrested on Sunday following a nationwide police investigation that began in September.

Ms Trinh had worked as a supervisor at a strawberry farm north of Brisbane, according to Queensland Police.

The maximum prison term for contaminating goods in Australia was recently raised to 15 years.

Ms Trinh faces seven counts, and has not said whether she will fight the charges.

Police said there had been 186 reports of needle-contaminated strawberries since September, though 15 turned out to have been hoaxes.

It is not yet clear how many of those Ms Trinh is alleged to have caused. On Monday, police described their investigation as “far from over”.

The court in Brisbane on Monday heard that Ms Trinh’s DNA had been found on strawberries in the state of Victoria.

“The case that is put is that it is motivated by some spite or revenge,” Magistrate Christine Roney said.

“She has embarked on a course over several months of putting a metal object into fruit.”

The first cases emerged in Queensland, where a man was taken to hospital with stomach pains after eating strawberries.

Farmers were forced to dump tonnes of berries, and supermarkets pulled the fruit off sale.

In response, Australia’s government raised the maximum prison term for fruit tampering from 10 to 15 years.

Prime Minister Scott Morrison vowed to “throw the book” at anyone responsible, saying: “It’s not funny, putting the livelihoods of hard-working Australians at risk, and you are scaring children. And you are a coward and a grub.”

On Monday Supt Jon Wacker, from Queensland Police, described it as a “unique investigation impacting virtually every state and jurisdiction in Australia”.

In Queensland, where the strawberry industry is worth A$130m (£72m; $93m) a year, the local government pledged A$1m to support the state’s stricken farmers. An A$100,000 reward was offered for information leading to the arrest and conviction of perpetrators.

Prosecutors said they opposed giving bail to Ms Trinh because she may face “retribution” in the community.

However, Ms Roney said a bail application would not be considered until more information about the case was known.

More than 140 whales die after stranding on New Zealand beach