When we moved from Los Angeles to Australia in 2017, one of the first things my then-14-year-old son noticed was his peers’ attitudes about wealth — and housing in particular. When someone asked him where he lived in Melbourne, my son used a large public housing tower at the end of our street as a landmark, saying “I live a block behind those commission flats.” His classmates immediately started teasing him, jeering that he actually lived in public housing.

My son found this bewildering. In Los Angeles he went to a large public school that had students from all over the economic spectrum. But in L.A., it was his friends who lived in big houses in the Los Feliz hills who were uncomfortable about their circumstances, downplaying the wealth of their families. There was a certain pride among the kids who came from less money, a very American sense of honor in knowing that their accomplishments were their own and not thanks to economic privilege.

I kept thinking about those teasing classmates as I reported the story published this week about the lockdown at Melbourne’s Flemington and North Melbourne public housing towers. Many of the residents I spoke with had a real sense that the wider community views them as lesser — a sense made all the greater by their treatment during the lockdown.

Since the story published, much of the conversation on Twitter and in the comments has been about how successful Melbourne’s response has been to the virus, and how this lockdown was a necessary part of that response. Interestingly, I heard the same thing from most of the residents of the towers, who were all notably community-minded. Thier issue was not with the lockdown itself but with the way it was implemented, and the vastly different way they were treated compared to other Melbourne residents. The words I heard most often to describe how this made them feel were: other, lesser, disposable.

Visiting the North Melbourne tower was especially interesting, because I’d spent a lot of time there in the late 1980s as a young teenager. I had a friend who lived there, and I remember it as a desolate place. It feels completely different now — the lobby is sparkling clean, and a lush community garden takes up one side of the grounds. Everyone I spoke to was studying at university or running a nonprofit or helping to organize and uplift their community — or all three of those things. It felt like a hopeful place — which it absolutely did not when I spent time with my friend there 30 years ago.

When I asked North Melbourne tower resident Barry Berih if he felt supported or neglected by the wider community during the lockdown, his answer surprised me: He felt a huge amount of support from the young people of Melbourne, both via social media and in terms of the people he saw showing up in person to help. There was a generational divide, he thought, but it made him optimistic that young people saw the tower residents as worthy of empathy and respect.

I thought about my son’s classmates, and hoped that Mr. Berih is right.

Here are this week’s stories: 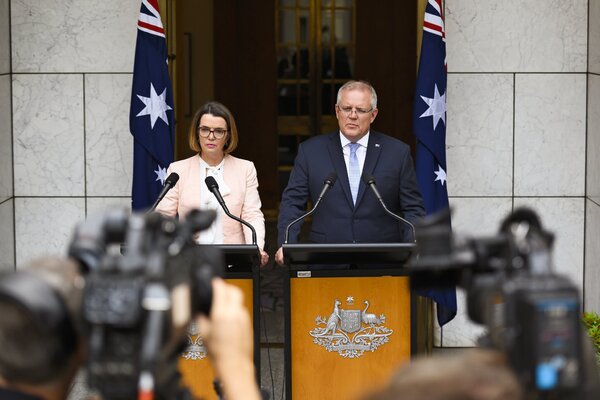 Australia’s Struggle With ‘Bonk Bans’ and ‘Manterruptions’ Prime Minister Scott Morrison came under fire this week for abruptly interrupting a female senior minister who was asked what it’s like to be a woman in Parliament.

A Police Swarm. Frantic Calls. Then 3,000 People Locked Inside. On July 4, Australia’s second-largest city went into lockdown. But residents of nine public housing towers were singled out for even stricter treatment, leading many to suspect discrimination.

Go Ahead, Binge Old Movies and Jam Out to ’90s Hits. Decades-old movies, songs and video games have surged in popularity over the pandemic. Psychologists say conjuring nostalgia during stressful times is a healthy coping mechanism.

Who Would Rig This Vote? The Fraud Was Real (and Feathers Were Ruffled) More than 1,500 fake votes were slipped into New Zealand’s Bird of the Year 2020 contest in favor of the kiwi pukupuku.

Australia Quiet on First Foreign-Meddling Arrest, but Target Is Clear. The suspect, who has been active in Chinese-Australian groups, was charged under laws against foreign interference that were seen as a response to China.

How Pfizer Plans to Distribute Its Vaccine (It’s Complicated) Success will hinge on an untested network of governments, companies and health workers.

No, There Is Not a Lot of Good Evidence Behind the Trump Lawsuits. The evidence the suits have offered has been limited and, according to several judges and experts, unlikely to affect the outcome of the race.

The Uneasy Afterlife of Our Dazzling Trash. Where do CDs go to die?

How the Dream of Hong Kong Democracy Was Dimmed. A look at key moments in the showdown between pro-democratic forces and the Beijing-backed authorities who have clamped down on Hong Kong’s freedoms.