When I first heard about Australia’s “bush courts,” I knew they were something I wanted to report on. Makeshift courtrooms, fly-in legal services, and Australians processed through that system who neither understood English nor how the courts worked. The details shocked me.

But as any journalist working in this country knows, stories about Indigenous Australia can be difficult: Communities can be extremely remote, may not speak English and can be distrustful of outsiders — with good reason. Gatekeepers can also be paternalistic, and especially skeptical of the media, in whom Australia’s trust has eroded.

But this should not stop us from trying. In fact, the more difficult access to a story is, the more it is often worth doing: Those shady corners are exactly the places journalists need to go.

So in mid-October, the photographer Matthew Abbott and I arranged permission to go to Wadeye, a remote community 250 miles from Darwin, which is among the largest Aboriginal communities in Australia and holds the country’s busiest bush court. From Darwin, we took the five-hour drive through the rocky Outback, where we would spend four days observing the courts, which processed dozens of cases a day.

In Wadeye, we met with three criminal lawyers from the North Australian Aboriginal Justice Agency, whose role it is to defend dozens of clients in a matter of days in a makeshift courtroom annexed to the police station. The night before the court sitting, they sat on the floor of the studio where they were staying, poring over files that spilled out of suitcases. A fan thwacked overhead.

Many clients had dozens of pages of criminal history, which was “not unusual,” said Holly Fitzsimmons, one of the lawyers. Most people, knowing they had charges, would turn up at the courthouse, she added. Others, who may not have cellphones or have received or been able to read their summons in English, would have to be found by driving through the town at dusk.

As night fell across the sweltering town — where stray dogs roamed the dusty streets and children cooled off in blowup swimming pools — a community liaison officer, who works with the legal team to identify clients, drove around looking for someone who was due at court the next day. She honked the horn of her four-wheel-drive outside a house she believed the woman was in, and waited.

“That’s how you find people in Wadeye,” said the officer, who asked that she not be named so as to protect her relationship with the community. “I don’t get out at night,” she added, “because of all the cheeky dogs.”

These are the kinds of moments you can witness only when you’re on the ground. But the difficulty of gaining access to some Indigenous communities, and a reluctance to let the media in, can make it challenging. In the courtroom, it can be even harder.

Though Australian courts work on a principle of open justice, there are some circumstances in which the judge can bar reporters from entering the courtroom or hearing certain information, as well as publishing it. Ostensibly, these rules are designed to protect defendants, but critics say that too often they protect the justice system from scrutiny.

Last year, the Northern Territory closed its youth courts, in what the government said was to prevent the “naming and shaming” of children in the media. But the press and critics said it was throwing a cover of darkness over an already problematic system, where judges have been investigated for making racist remarks, and Indigenous defendants often have unequal access to the same services as other Australians.

The laws also raise questions about the responsibility that falls on journalists themselves. It is our job to explain to those who distrust us why we are there, what we are doing, to report and write with integrity and sensitivity. I thought about this a lot in Wadeye.

I was also reminded that even when it feels uncomfortable, it is our job to stay put. It’s to push buttons that people with power don’t want pushed, and to ensure that people’s agency is respected: Anyone who wants to share a story should have the opportunity to do so.

I’m curious to hear your thoughts about how much access media should have to the courts, and to Indigenous communities.

Write to us at [email protected]

Now, on to the week’s stories: 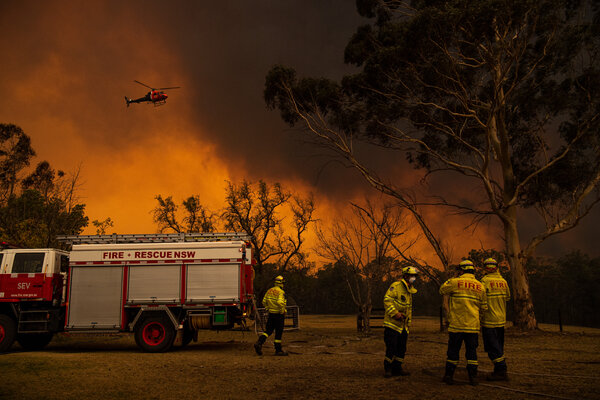 It’s Australia’s First Big Blaze of the Fire Season. How Bad Will the Summer Get? Last year, the country suffered catastrophic wildfires. Now, it is watching as a scenic getaway burns. What the rest of the season brings may depend on heat waves, winds and dried-out grass.

He Broke Out of Quarantine for 8 Seconds, and Got a $3,550 Fine. Around the world, flouting coronavirus regulations can have expensive consequences.

In Australia’s Deadly Year for Shark Attacks, a Surfer Lives to Tell the Tale. After being bitten by a great white in South Australia, the victim managed to paddle ashore and walk nearly 1,000 feet for help. He said the attack “was like being hit by a truck.”

The Best Movies and TV Shows New to Netflix, Amazon and Stan in Australia in December. Our streaming picks for December, including ‘The Prom,’ ‘Ma Rainey’s Black Bottom,’ and ‘Your Honor.’

Australia Gears Up for the Great Koala Count, Using Drones, Droppings and Dogs. The marsupials are not easy to find, or count accurately, so officials will deploy new methods.

‘Like a Cattle Yard’: How Justice Is Delivered in Australia’s Bush Courts. In some remote Aboriginal communities, judges and lawyers arrive by plane and handle dozens of cases in a single day. Critics say language barriers and the rapid pace infringe on human rights.

Japan’s Journey to an Asteroid Ends With a Hunt in Australia’s Outback. The Hayabusa2 mission cements Japan’s role in exploring the solar system, but finding its asteroid cargo presented one last challenge.

Airlines Gear Up to Transport Vaccines That Could Revive Travel. Planes are one part of an elaborate supply chain to move billions of doses of vaccines around the world.

The Newest Challenge for Europe’s Parks: A Surge of New Nature Lovers. Lockdown-weary city dwellers across the continent are visiting parks and other protected areas for the first time, overwhelming staff and generating pleas for more support.

The Olive Garden Is Open, but Marilyn Hagerty Isn’t Eating There. At 94, the author of a North Dakota restaurant review that became an internet sensation is still at work. In the pandemic, though, she’s had to make a few changes.

Watch This Disgusting Food Video Right Now. It Explains Everything. A viral clip of a grotesque breakfast dish reveals more about the way we use social media — and how it uses us — than about American cuisine.

DNA found in accused's apartment most likely to be from Grace Millane, court hears