GRAFTON, Australia — The quiet town in eastern Australia used to be little known except for its annual Jacaranda Festival, when visitors flocked to see streets emblazoned with the blossoms of indigo-flowered trees.

But on Friday, international news media descended, shattering the peace and turning the world’s eyes on Grafton, New South Wales, where Brenton Tarrant, 28, who has been accused of massacring 49 people at two mosques in Christchurch, New Zealand, grew up.

As the suspect was charged with murder in a Christchurch courtroom on Saturday, residents in his hometown expressed shock, disgust and disbelief that one of their own could have been responsible for such a crime.

“The town has gone into silence,” said Ola Williamson, the owner of a restaurant in Grafton. People had lined up to buy newspapers that morning looking at one another with shock. “I hope we don’t get tarred with the same brush,” he added.

Some residents said they felt sorrow and horror for Christchurch’s Muslim community, along with confusion. “I don’t understand why someone from Grafton would be so racially motivated to do such a thing,” said Willow Walker, a resident. “That’s what shocks me the most.”

As details about Mr. Tarrant’s life began to emerge, residents of the town, unused to such intense attention from reporters walking their streets, also expressed anger and worry about the reputation of Grafton.

“All the reporters are stating that this is a bad town, we breed terrorists,” said Trudy Schultz, 52, a resident. “We don’t agree with that at all.”

Although officially a city, Grafton — which has population of 18,000 and lies on the country’s east coast, 380 miles north of Sydney and about three hours from the Gold Coast — is known as a country town on the Clarence River, surrounded by farmland.

Residents described it as a quiet place filled with families and pensioners that has struggled economically over the past few years. Infrastructure projects like a new bridge and a new jail have encouraged tradesmen to settle there.

It is the kind of place, they say, where residents leave their houses unlocked and everyone knows someone.

But on Saturday, streets in the town center were nearly deserted, broken up by occasional groups of biking teenagers and families walking around a park.

Mr. Tarrant grew up on grassy, suburban street. A woman who answered the door of a home where he is believed to have been raised declined to comment. Neighbors who remembered the family said that he had played in the street as a child and that the family had moved away about eight years ago. 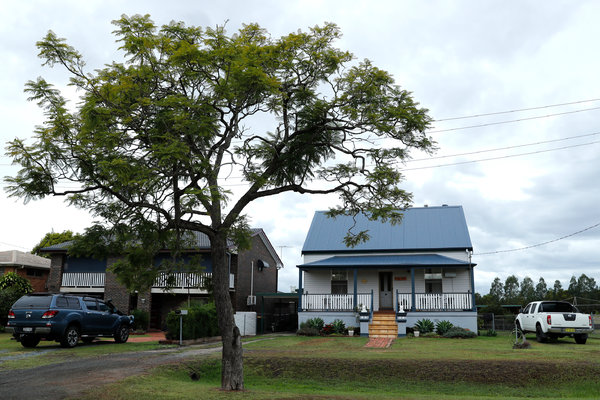 In a manifesto attributed to Mr. Tarrant, the writer describes himself as “Just a ordinary White man” from “a working class, low income family,” adding: “I had a regular childhood, without any great issues. I had little interest in education during my schooling, barely achieving a passing grade.”

According to the 2010 obituary for his father, Rodney, in the local newspaper The Daily Examiner, Mr. Tarrant’s parents divorced early in his childhood. Former classmates at Grafton High School said that he had lived with his father, a local trash collector who competed in triathlon competitions, and that his mother was a schoolteacher.

They remembered him as a disruptive, cocky student who seemed normal, if nasty at times.

“He was sort of like your class clown,” said Kara Hickson, 28, who graduated in the same year as Mr. Tarrant. “Always trying to make people laugh and always being silly.”

But they also described him as a teenager who was bullied, even by his friends, for his weight, his freckles and his curly hair. At one point, he was a “goth” and a heavy-metal fan.

After they graduated in 2008, former classmates said, he turned his focus to personal training. “He lost a heap of weight,” Ms. Hickson said.

After the death of his father, he used profits from investing in cryptocurrency to travel the world, they said. “We never really heard from him after traveling,” she said.

“He never showed any extremes or extremist views or any crazy behavior,” Tracey Gray, his former employer, said in an interview with the broadcaster 9 News. “It was my understanding he was open to see the world, to see as many places as possible. He just wanted to experience different experiences,” she said of his decision to leave town.

By Saturday afternoon, residents of the street where Mr. Tarrant grew up said, several reporters had already knocked on their doors. Cameramen waited outside his former home and the Big River Squash and Fitness Center, a gym where he had worked as a personal trainer.

“It’s a shock for the community to get the global attention like this for something that you don’t want the attention for,” said Bill North, the editor of The Daily Examiner.

The townspeople, who have been protective of the remaining Tarrants in the area, have harbored animosity toward the news media for what they see as infringing upon the family’s privacy, he said.

The town’s demography is largely white, with a prominent Indigenous community. Few immigrants live in the area, residents said. Some said that though life in Grafton was pleasant, there were moments of tension.

“There is still a lot of racism around the place. It’s usually sort of hidden a little bit,” said Teena Colgrave, though she added that it was the same all over Australia.

Still, a vigil was held in a Grafton church for the victims of the shooting.

“It’s just one of those things you just don’t expect someone from here,” said Jeff Smith, the owner of an ice cream store in the town’s center.

“It’s frustrating when some of the media says this is Grafton’s own — we don’t want anything to do with that sort of mentality.”