Home » Australasia » Taylor Swift, Donald Trump and an America That Confounds the World

The Australia Letter is a weekly newsletter from our Australia bureau chief. Sign up to get it by email. Here’s where to find all our Oceania coverage.

After Taylor Swift sang “Bad Blood” and “Gorgeous,” before the trapeze artists appeared, while the fireworks were bright and the rain was still bucketing down, I smiled and thought: This is so American.

That was last Friday, when she performed in Sydney at ANZ Stadium. I was there with my young daughter and son, and it’s not the first time I’ve contemplated what pop music could teach my kids about the United States.

As I wrote when they were toddlers in Mexico, “our ears pull in the first lessons of culture,” and America’s greatest appeal can often be found in the sounds showing off the country’s carefree creative exuberance.

Friday’s concert, though, came at a serious time: just a few days before the American midterm elections that determined control of Congress. And what I saw in Taylor Swift’s no-holds-barred extravaganza (even though I’m a middling fan of her music) was some important context for all of us trying to figure out what on earth is going on in the U.S. of A.

What it told me — or reminded me — was that the country is impossible to hold down, that it’s far too big and too dynamic for any one person to totally corral or define. No place that can produce Childish Gambino and Taylor Swift, or Lady Gaga and Cardi B, will ever be easy to control.

President Trump received a form of that message with Tuesday’s election results. Despite structural barriers that favor Republicans in many states (from gerrymandered districts to voter ID restrictions), the House of Representatives flipped to the Democrats.

The Republicans added seats in the Senate but the results will no doubt lead to more pressure for the president and more open political conflict.

House leaders have already signaled that they plan to use their subpoena power to demand more from Mr. Trump (including his tax returns) while the president has threatened that he would retaliate with investigations of his own.

But before the battle gets going, let’s take a breath and ask: What do the results tell us about the country on a deeper level?

A few things to look at:

1. District Maps: This New York Times map shows which parts of the country shifted to the left and to the right compared to 2016. The leftward tilt was pretty widely dispersed.

2. Exit Polls: Surveys of voters from the 1980s onward highlight divisions that are both racial and generational, with the age divide becoming especially striking.

3. Diversity: More women and more young, nonwhite lawmakers are heading to Washington, including the first Muslim and Native American women elected to Congress. That means the power structure will more closely resemble the country at large.

All three of those developments point to an electorate with more people who have become more frustrated with President Trump, including many of those who voted for him two years ago.

If the age trends hold, and with a bunch of the winners coming from the more moderate side of the Democratic Party, it may also mean a future with more consensus than we have now.

Imagine that, an America united. I admit, I have a hard time picturing it.

But if we look beyond the what-ifs and issues and ideology — if we really step back — maybe we can see something more illuminating.

The results and the messiness of American democracy — with ridiculously long lines to vote, with far too many ways to cast ballots, with oodles of money sloshing around from billionaires — all spotlight the jumble of paradoxes that have shaped the United States since settlement.

It’s a country founded as a utopian “city on a hill” — and defined by ruthlessness in capitalism and politics.

It’s a country where white nationalism is surging — and “Black Panther” is the year’s top box-office earner.

I could give you a dozen more of these with 10 minutes and a beer, but I don’t live there anymore so I won’t bore you with that.

And really, Taylor Swift said it best. With just her guitar, playing in the middle of a giant stadium, with most of her big budget production taking a rest, she stripped down America to its essence:

Now for some other stories. Because even Tay knows it’s not always about her or her country.

You know where to find us for more discussion: Our NYT Australia Facebook group, and at [email protected]

We had a busy week. So busy in fact, that I’m going to limit this week’s roundup to coverage connected to Australia and the region. Let’s dive in.

If you have a thoughtful 15 minutes… 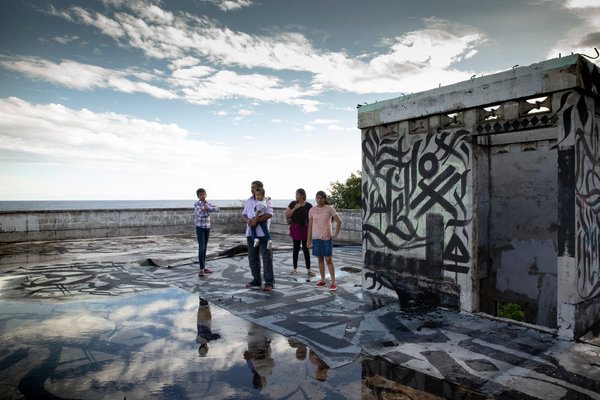 • Zero-Tolerance Immigration and Suicidal Children: A reporter made it to Nauru for us and found, firsthand, the effects of Australia’s offshore detention policy. Part of what’s intensifying the desperation? Refugee rejections from the Trump administration.

• ‘The Tattooist of Auschwitz’ and the History in Historical Fiction: Most readers haven’t noticed or been worried by omitted details or factual mistakes in the book. But is there a greater imperative for novels about the Holocaust to get basic facts correct?

If you’re wondering about Australians and the world…

• He Helped People Cheat at Grand Theft Auto. Then His Home Was Raided. A gamer in Melbourne has had his assets frozen in connection with a popular video game cheat. He’s one of many being sued by game companies worldwide, raising questions about copyright and freedom.

• Arthur B. Culvahouse Jr., Trump’s Pick for Ambassador to Australia, Offers Direct Line to President: Mr. Culvahouse is the third candidate the White House has selected to fill the post.

• Another Trump Scoop, a Giddy Reaction and a Reporter Under Fire: Jonathan Swan made a name for himself in Canberra, and is now a reporting star in Washington. But is he too quick to choose access over detachment?

• Robyn Denholm Succeeds Elon Musk as Leader of Tesla Board: Tesla said Ms. Denholm would step down from her role at Telstra once her six-month notice period is complete.

If you’re looking for something to smirk or smile about…

• What Sydney Can Learn About Dining From Another Sunny City: Our restaurant critic in Australia wishes that Sydney could take a few lessons from Los Angeles.

• Virgin Australia Airline Seeks to Thank Veterans for Their Service. Vets Say, ‘No, Thanks.’ Critics said the policy was too American, and at odds with Australia’s egalitarian ethos.

• Crossing Paths With Meghan and Harry, and Missing the Plane to Paradise: In New Zealand, our columnist immerses herself in Maori culture. Then rain, traffic and a lost (and found) passport complicate what should have been an easy Fiji trip.

It’s time for our monthly Netflix guide. I started watching the new “House of Cards” — not sure how I feel about it yet.

We’ve also pulled together all the guides from previous months, putting them on a single collection page for easy browsing and so past recommendations don’t get lost.

Are there other things in media or life you’d like to see Times guides for? Let us know.

Here, for inspiration, are some other Times guides that aim to help you live a better life.

Damien Cave is the new Australia bureau chief for The New York Times. He’s covered more than a dozen countries for The Times, including Mexico, Cuba, Iraq and Lebanon. Follow him on Twitter: @damiencave.

Melbourne 'in lockdown' as one dead, two injured in city stabbing