If, at more than a year long, the race to elect the president of the United States is an ultramarathon, Australia’s campaign season is a sprint.

Prime Minister Scott Morrison of Australia fired the proverbial starting pistol on Thursday, declaring a federal election for May 18 and kicking off a 38-day dash to the ballot box counting today and Election Day.

“There is so much at stake at this election,” Mr. Morrison said at a news conference in Canberra, emphasizing his party’s platform focused on economic issues and tax cuts.

It’s still not clear exactly how many days of campaigning will be allowed; the Labor Party leader, Bill Shorten, has called for a campaigning ban on at least two holidays between now and Election Day.

But clearly, Australia’s race will be quick. By contrast, the 2016 presidential campaign in the United States lasted 596 days, counting from the date of the first major candidate’s official declaration to Election Day. The 2020 campaign, one of the longest in history, is set to last 1,194 days — the equivalent of more than 30 Australian election seasons.

The election comes at a critical time for Australia, an American ally, which is torn on important issues such as climate change and how to contend with China’s rise.

On the surface, a shorter campaign period would seem to prevent voter fatigue and limit the extent to which questionable financial contributions can muddy the process. But experts say campaigns of even a few weeks are marred by many of the same problems seen in longer elections.

Ultimately, a shorter campaign has less to do with perfecting the process and more to do with simply speeding it up.

What determines a campaign’s length?

The length of a campaign can be boiled down in most democracies to this question: Are you electing a president or a prime minister? Put another way: Are you voting for an individual who you need time to get to know, or are you voting for a legislating party that is headed by a leader with whom you’re already familiar?

Because the parties in the parliamentary system choose their candidates for prime minister — in the case of Australia’s main parties, Scott Morrison of the Liberal Party and Bill Shorten of Labor — there is no need for months of vetting, debates or primaries. 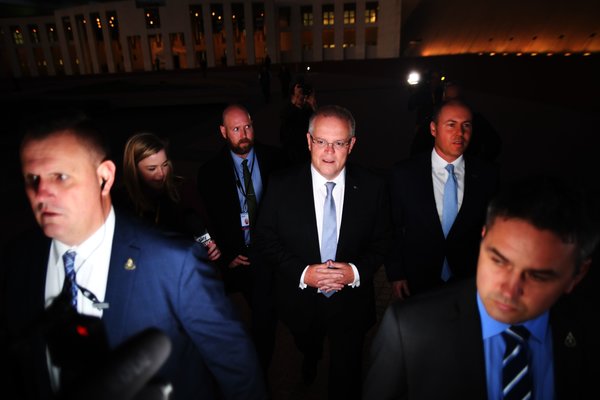 A 2015 study, analyzing more than 26,000 polls in 45 countries since 1942, found that voters’ preferences take much longer to form in a presidential election than a parliamentary one because presidential voters need more time to assess the candidates.

Parliamentary systems also differ from presidential republics in the frequency with which elections can be called. In a presidential system, the term of office is fixed, and campaigning for the next election effectively starts when the last election ends.

But in a parliamentary system, general elections can be called more regularly and with less notice. To avoid lengthy gaps without a government, many countries have laws limiting the duration of a campaign.

How does Australia stack up?

Australian campaigns last between 33 and 68 days. That’s short by American standards but an eternity compared to Singapore, a country that has been governed by the same party for five decades, and which gives voters just nine days to choose a candidate.

Campaigns in Japan run for 12 days. In France, campaigning before the first round of voting can last no more than two weeks. The campaign period in Canada lasts about 36 days, in Britain five to six weeks and in Israel 101 days.

Like Australia, those counties all have legally fixed campaign periods.

According to John Keane, a professor of politics at the University of Sydney and author of “The Life and Death of Democracy,” the writers of Australia’s Constitution had good reason to limit the length of campaigns.

The writers feared “that since the House of Representatives would usually not last three years from the time of its first meeting, and since sitting governments and politicians in search of victory might be tempted to string out election campaigns, good government would suffer,” Professor Keane said.

They also worried, he added, that “abuse of power and political discontinuity would get the upper hand. Hence the need to place strict time limits on election campaigns.”

Members of Australia’s lower house of Parliament, the House of Representatives, have to face voters every three years, and the last general election was held in 2016. To meet the time frame, Mr. Morrison had to declare an election before June.

Mr. Morrison has been in power since August, but this is the first time he will face voters as the head of the Liberal Party. He took office after a party putsch, known as a leadership spill, that ousted his predecessor, Malcolm Turnbull.

By law, the election cannot coincide with state elections or holidays, and has to take place on a Saturday.

Saturday elections and a contracted campaign period are Australian traditions meant to increase voter engagement and turnout. Similarly, Australians are required by law to vote and are fined if they do not.

Compulsory voting clearly increases participation, but the data is mixed on whether it entrenches partisanship. One 2012 study found that “compulsory voting boosts the likelihood that one will identify with a party and, in turn, the strength of party attachments.”

But in her book “From Secret Ballot to Democracy Sausage: How Australia Got Compulsory Voting,” Judith Brett, an emeritus professor of politics at La Trobe University in Melbourne, Australia, argues that voters are increasingly disenchanted with the major political parties.

More than ever, Professor Brett writes, Australians are splitting their votes between parties in House and Senate elections.

“Without compulsory voting,” she writes, “many disillusioned voters would turn away from politics altogether and stop voting.”

Does a shorter campaign make it harder to buy influence?

It is easy to believe that a shorter campaign would limit the amount of money that candidates need to run, thereby decreasing their opportunities to exploit financing loopholes.

But, according to Professor Keane, “time limits on election campaigns have little to do with the need to dampen financial fraud.”

“If anything,” he added, “the short election campaigns do the opposite: As in practically every democracy, our elections are awash in dark money.”

The government provides public financing for the parties, which in theory should limit the impact of moneyed interests. But there are loopholes that allow the parties to accept corporate and private donations with little oversight.

A study by the Grattan Institute, an independent Australian think tank, found there was no way to account for more than 60 million Australian dollars, or about $42.7 million, donated to political parties in the 2016-17 financial year.

In the prior fiscal year, which included the 2016 federal election, Grattan found that at least 40 percent of party contributions — 154 million Australian dollars — could not be traced to their donors.

Want more Australia coverage and discussion? Sign up for the weekly Australia Letter, start your day with your local Morning Briefing and join us in our Facebook group.