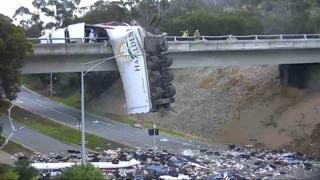 A truck transporting poultry products has been left hanging from a road bridge after crashing in the Australian state of Victoria.

The accident has resulted in lane closures and major delays on the Calder Freeway north of Melbourne after the vehicle shed its load onto the road below.

An operation to clear the debris is under way.

The driver is in hospital with non-life threatening injuries, media say.

Authorities do not know the cause of the crash yet, but said the truck had struck a side barrier and rolled over, sending its trailer over the edge.

JUST IN: All citybound lanes are closed on the Calder Freeway in Keilor after a truck rollover. The truck's trailer was hanging over Green Gully Road. #9News pic.twitter.com/O20lrWTIJH

Reporting on a secret trial about child sex abuse